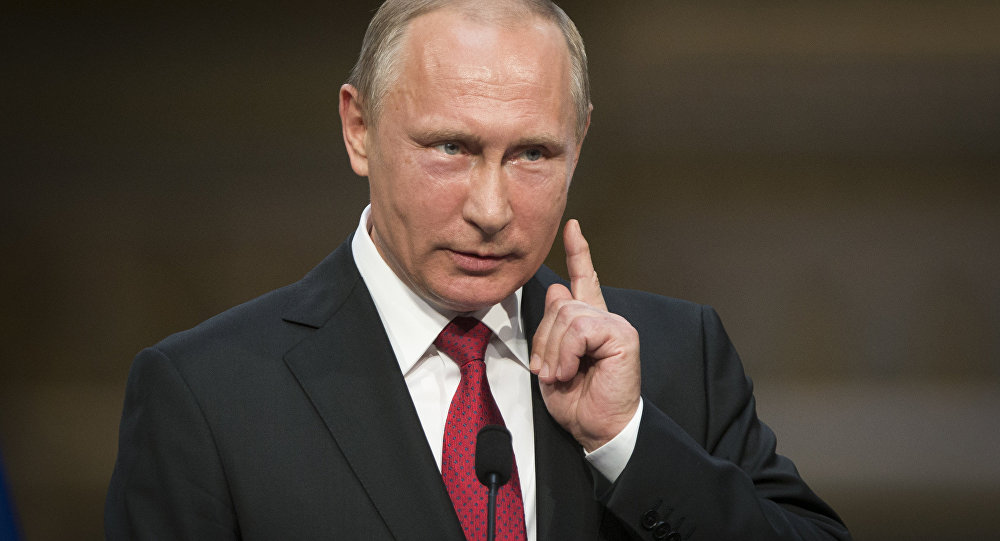 The Russian president has made a statement on the issues regarding the Washington-Moscow ties and other topics at a press-conference on the second day of the Asia-Pacific Economic Cooperation (APEC) summit that is held in Vietnam.

US Actions Against Russian Media

Vladimir Putin has said that Moscow will respond in a reciprocal manner to the actions of the US regarding Russian media outlets, including Sputnik News Agency and the broadcaster RT. He added that US authorities chose the way of the "actual closure of Russian" media outlets in the US.

"It would be funny if it wasn't so sad, as Russian people say," Putin noted, saying that the US had long promoted itself as a champion of democratic values in the world. "There's no democracy without freedom of speech. The attack on our media in the US is an attack on the freedom of speech, clearly."

Putin has stressed there was a lack of proof that Russian media meddled in the US 2016 presidential election campaign, adding "there cannot be such proof."

"[Russian media have put] around $100,000 in advertising, while other media, the US media, have been allocating millions for the ads. This is just incommensurable. And [Russian advertising] has been considered as dangerous, and is being interpreted as some meddling."

Russian media outlets have been under heightened pressure in the US amid a probe into Moscow's alleged meddling in 2016 presidential election. So far, the micro-blogging service Twitter has blocked ads from accounts owned by RT and Sputnik citing the interference in the US affairs. Moreover, the US Department of Justice has demanded that RT America register as a foreign agent by November 13.

Absence of Separate Meeting Between Putin and Trump

© Sputnik / Michael Klimentyev
WATCH Putin, Trump Greeting Each Other at APEC Summit in Vietnam
Vladimir Putin has met briefly with his Donald Trump at the APEC summit. Commenting on the conversation, the Russian leader said that the absence of a separate meeting "showed that relations between Russia and the United States had not yet overcome their state of crisis."

Putin went on to note that their teams weren’t able to coordinate a bilateral meeting due to scheduling conflicts and conference commitments. However, as the Russian president remarked, "nothing terrible has happened" and the leaders managed to "discuss everything they wanted." Kremlin spokesman Dmitry Peskov has also said later the lack of a full-scale bilateral meeting between the leaders was compensated by multiple contacts on the sidelines of the APEC summit.

"We have a normal dialogue [with Trump]. Unfortunately, there was not enough time for us to talk in more detail about the whole complex of our ties, and there are issues we could talk on regarding the cooperation in the areas of security and the economy, of which there is practically zero today," Putin said.

Putin went on to say that Moscow is ready to "turn this page" and engage in relations which will see cooperation on issues that are of interest to both the people of Russia and the US, adding that Moscow would like to boost economic ties with Washington.

Later in the day, Kremlin spokesman Dmitry Peskov said that there is an understanding in Russia and the US that bilateral communication between the two nations is needed to prevent the possible crisis in relations between Moscow and Washington.

The military actions in the fight against terrorists in Syria are coming to an end, and thus conditions for a political process are needed, Vladimir Putin said.

"Today, the most important thing is to finish this job and sustain the agreements on de-escalation zones, sustain the ceasefire regime, create conditions for beginning the political process," Putin told reporters, adding that this was what his joint statement with US President Donald Trump was about.

"I think it will be an important point in the work to settle the Syrian issue," Putin added.

The Russian president has also said that the positions of Russia and China on North Korea fully coincide as they both call for a dialogue to settle the Pyongyang crisis.

"We consider [North Korea issue] a problem, we do not recognize the nuclear status of North Korea," Putin told journalists at a press conference on the results of the APEC summit. 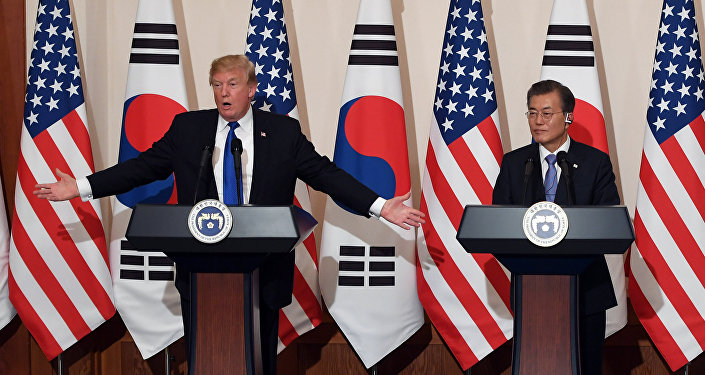 © REUTERS / ung Yeon-Je/Pool
S Korean Leader Explains What Trump's Strong Rhetoric on N Korea Really Means
Putin added that both Russia and China had proposed a roadmap with steps to settle the North Korean crisis, including "first of all, halting the rhetoric, then halting all manifestations of aggression from all the sides, and sitting down at the negotiating table eventually."

Japan, South Korea, and the United States have recently shown signs that they also see no alternative to talks in dealing with North Korea crisis, Putin added, expressing hope that this will help resolve the conflict. Still, according to the Kremlin spokesman, the situation around the DPRK requires now absent cooperation between Russia and the United States.

"In Romania, [US] launchers are located, which can be used not only for interceptor missile but for the Trident systems as well. These are the sea-launched mid-range missiles, however, they can be transported to the land, and used as land-based mid-range missiles. This is a direct violation [of INF Treaty]," Putin told reporters.

The Russian president also that there are some other issues needed to be discussed with Washington, in particular concerning the Russia-US Treaty on Measures for the Further Reduction and Limitation of Strategic Offensive Arms, also referred to as the New START.

© REUTERS / Shannon Stapleton
Russia Cannot Continue Cutting Nuclear Arsenal in Tandem With US – Mission to UN
US Secretary of State Rex Tillerson said earlier in September, that Russia had violated the INF Treaty. The Russian Foreign Ministry responded by saying that Moscow considered the US accusations groundless, and adding that Washington did not even try to find evidence to support its claims.

In October, Putin explained, that before the INF deal had been reached in 1987, the US missile capabilities had already included air- and sea-launched missiles, while the Soviet Union had not had such weapons. Under the INF, land-based missile systems had to be abandoned by the parties to the agreement. However, the disarmament was done unilaterally by the Soviet Union, the Russian president added. So Russia has created its own air- and sea-launched missiles to catch up with US missile capabilities, the president pointed out. Russia has complied with and will comply with all the terms of earlier agreements until its partners do, Putin has also said.

"As for Mr. Manafort, who is suspected of ties to Russia, the only thing, which links him [to Russia] is that he signed contracts as a businessman, when he was in charge of a US-based PR agency, including [contracts] with ex-Ukrainian President Viktor Yanukovych. But what does it have to do with Russia? Nothing. It is just nothing. It is just babbling and an attempt to use any information to fight against the incumbent [US] president. But it does not concern us, let them deal with it on their own," Vladimir Putin said.

Manafort and another former campaign adviser Richard Gates have been indicted on 12 counts, including money laundering and failure to register under the Foreign Agents Registration Act (FARA) of 1938 for their work for the Ukrainian government. The indictments were filed by Special Counsel Robert Mueller, who is tasked with investigating allegations of collusion between the Trump campaign and Russia in the 2016 US election.

US Peacekeepers in Ukraine

Russian President Vladimir Putin on Saturday declined from making a comment on media reports alleging the United States planning to propose the deployment of US peacekeepers to Donbas, saying he had not heard of such reports. 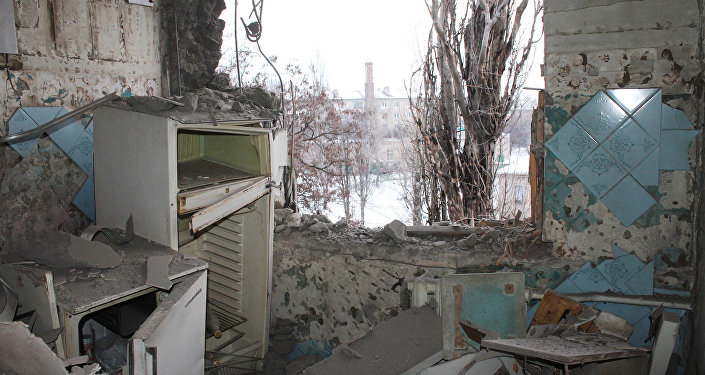 © Sputnik / Irina Gerashchenko
US-Russia to Discuss Sending Peacekeepers to Eastern Ukraine – Reports
"Suggestion is one thing, but when a proposal is put down on paper it often looks completely different… What would I comment on if it does not exist? If such proposals are made, then we will see," Putin stated.

This comes after on Thursday, The Wall Street Journal reported, citing US and EU diplomatic sources, that Washington intends to seek Russia’s approval for the deployment of 20,000 UN peacekeepers across Ukraine's eastern Donbass region. Washington is expected to raise the proposal with Russian officials in coming days, according to the publication.

The next presidential election in Russia will be held in March 2018 and the election campaign will start in December. Plans to run for president were announced by Russia's LDPR leader Vladimir Zhirinovsky, the head of the Yabloko party, Grigory Yavlinsky, TV host Ksenia Sobchak, and others. The presidential administration has not yet provided information on whether incumbent President Vladimir Putin will take part in the election.