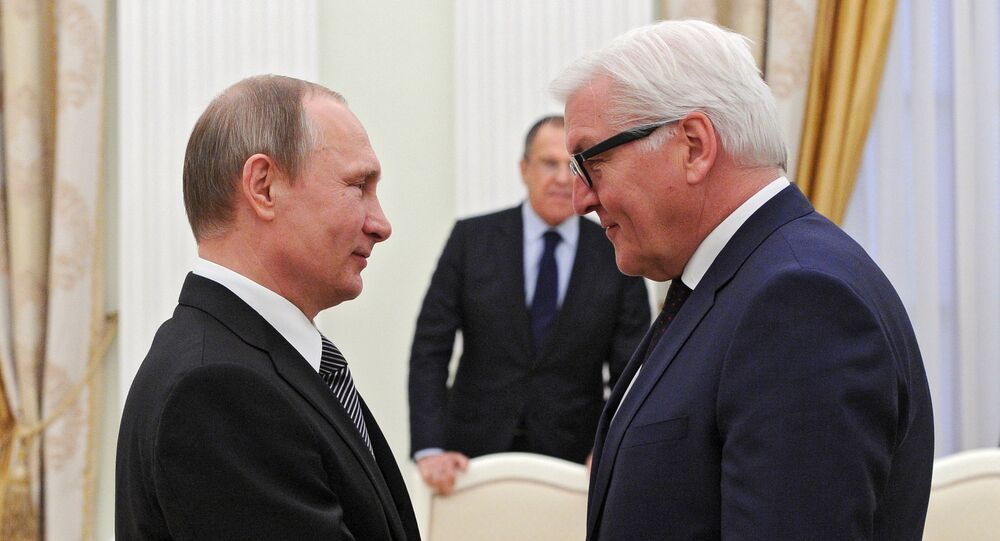 The Russian and German presidents have held a joint press conference after talks in Moscow. Prior to his visit, Steinmeier said that the restoration of bilateral trust would be on the agenda.

Relations between Russia and Germany, despite the current difficulties, are moving forward and the countries are ready to work together, Russian President Vladimir Putin said after Wednesday talks with his German counterpart Frank-Walter Steinmeier in Moscow.

Putin also stressed that the German businesses intend to expand their presence in Russia.

"I would like to note that the German businesses are determined to expand their activities in the Russian market. As you know, I have discussed this issue in Sochi recently, on October 12, at the meeting with the representatives of the German Committee on Eastern European Economic Relations and heads of leading German companies," the president said.

© AP Photo / Markus Schreiber
'Berlin Must Take Countermeasures': US Anti-Russian Sanctions Anger German Business
According to Putin, the volume of German direct investment in Russia is growing and has reached $312 million in the first quarter of 2017. The Russian president noted that the number significantly exceeded the total volume of German investments in 2016, which amounted to $225 million. He added that over 5,500 companies with the German capital are successfully operating in Russia.

His German counterpart, in his turn, said that "sore" issues, including Crimea's accession to Russia, still remain in bilateral relations and they should be resolved through dialogue and trust rebuilding.

"I believe that we can not simply cancel the alienation that took place in the past, but our goal should be to ensure that the great disagreements of the past years are countered with greater predictability, the restoration of a certain minimum of confidence…These relations remain too important for us to remain in a state of the lack of dialogue," the German president stressed.

As for the global issues discussed by Putin and Steinmeier, the Korean peninsula crisis, the Iranian nuclear program and the Russian initiative to deploy UN peacekeepers to the Ukrainian region of Donbass were on the agenda.

The Russian president added that he had discussed Ukraine with his German counterpart, noting that "unfaltering implementation of the Minsk agreements should be the basis of a comprehensive resolution in southeastern Ukraine."

The two presidents also discussed the fight against terrorism in Syria.

"Of course we spoke about the current issues on the international agenda. We had a detailed discussion of the situation in Syria. We are united in the belief that it is necessary to seek a full and decisive elimination of terrorists on the territory of this country, to increase efforts to promote the political settlement," Putin said.