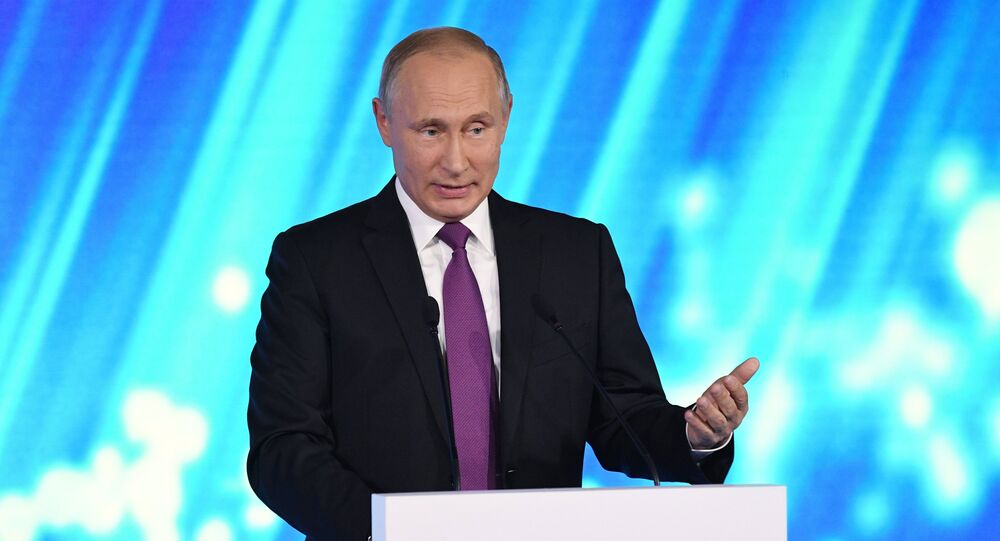 While delivering his speech at the 14th annual meeting of the Valdai Discussion Club Vladimir Putin raised a wide range of issues including the technological revolution, global security, nuclear and chemical disarmament, and the reform of the UN. The president underscored the necessity to team up to solve the burning international issues.

"There is less security in the world. Instead of progress and democracy, we see radical elements, extremist groups that deny civilization itself, seek to plunge it into archaism and into chaos, into barbarism," Russian President Vladimir Putin told the 14th annual meeting of the Valdai Discussion Club on Thursday.

"One may take a look at what happened in the Middle East, which some players have tried to reformat, imposing a borrowed model of development through an externally orchestrated coups d'état or even by the direct use of military force," he noted, adding that instead of teaming up with the international community some forces are trying maintain permanent chaos, apparently believing that they are capable of managing it.

Still, according to the Russian president there is an alternative to this opinionated and destructive policy, namely, the one demonstrated by Russia in Syria. He emphasized that Russia is working with all participants of the Syrian reconciliation process and is taking their interests into account.

"Russia is fighting against terrorists along with the legitimate Syrian government and other regional states, acting based on international law… And I would like to say that these actions and positive moves are not easy for us. There are many contradictions in the region. But we are patient and with this patience we are working with all participants of this [reconciliation] process very carefully, respecting their interests," Putin said.

North Korea Should Not Be Driven 'Into Corner'

Putin reiterated Russia's condemnation of nuclear tests carried out by the Democratic People's Republic of North Korea and called attention to the fact that Moscow continues to implement all the decisions adopted by the UN Security Council related to the North Korean problem.

At the same time he warned the international community against driving Pyongyang into a corner, emphasizing that whether one likes the country's government or not, North Korea remains a sovereign state.

"Any contradictions must be resolved in a civilized manner. Russia has always been in favor of this approach. We are firmly convinced that even the most complex 'knots,' whether the crises in Syria or Libya, on the Korean peninsula or, say, in Ukraine, must be untangled, not cut," Putin said.

The fragility of peace and stability was vividly demonstrated by the political crisis in Catalonia following the October 1 referendum on independence, President Putin remarked.

"Russia's position here is known: everything that is happening is a domestic affair of Spain, and should be settled within the framework of Spanish law in accordance with democratic traditions," he said.

© Sputnik
Valdai Club Experts Convene in Sochi to Discuss Challenges in Global Politics
Putin noted that actually the genie of European internal division was let out of the bottle much earlier, in the end of the 20th century, adding that Europe "had to think in advance" when disintegration processes only started to take shape on the continent.

"They knew, did they not? However, at one time they basically welcomed the disintegration of a number of states in Europe, without hiding their joy on this matter," the Russian leader noted referring to the dismemberment of the Warsaw Pact countries after the collapse of the Soviet Union.

"Why should the secession of Kosovo have been so thoughtlessly and unconditionally supported, based on the current political situation and the desire to please the elder brother from Washington,  provoking similar processes in other regions of Europe and in the world?" the president asked, denouncing the double standards adopted by the US and EU toward Crimea, which unified with Russia in 2014 as a result of the democratically organized referendum.

The Russian president recalled that the proponents of globalization had repeatedly claimed that international economic ties would bring world players together, helping resolve the most burning political issues.

In reality politics is increasingly often interfering in economic affairs, with some actors openly promoting their commercial interests via political means, Putin said.

"Not so long ago it was said that it is impossible, counterproductive and should not be allowed. Now, those who said it are doing exactly that. Some are not even hiding that they are using political pretexts and reasons to promote their own, purely commercial, interests."

To illustrate his point Putin referred to the latest package of sanctions recently adopted by the US Congress and signed by US President Donald Trump into law, which are "obviously aiming to expel Russia from European energy markets."

He underscored that the attempts to disrupt the building of new energy routes from Russia to Europe are dealing a blow to European economic interests and its security.

"In the modern world, strategic gains cannot be made at the expense of others," he stressed.

'Brave New World': What are the Prospects of Technological Revolution?

Vladimir Putin emphasized the importance of the scientific and technological development, technological revolution and the role of robotization and artificial intelligence (AI).

"Previously, assessing the role and influence of a state one referred to the importance of the geopolitical factors, the size of the territory, the military power, and natural resources… However, today scientific and technological progress emerges as one of the most important and its significance will only increase," Putin said.

He emphasized that the harmonious future will be impossible without social responsibility, freedom, and justice, without the respect toward traditional ethical values, human's dignity.

"Otherwise instead of prosperity and opportunity for everyone, the 'brave new world' may lead to totalitarianism, a caste society, conflicts and growing contradictions," he warned.

October Revolution of 1917 Had 'Complex' Results

© AFP 2021 / KIRILL KUDRYAVTSEV
Tired of Fake News? Washington Post Publishes Fake History of Soviet Union
"Today, I want to draw attention to the lessons of the events that happened a hundred years ago, to the Russian revolution of 1917. We see that its results were complex. We see how tightly knitted the negative (results) are with, one has to admit, the positive consequences of these events," the Russian president noted.

He emphasized that "revolution is always a consequence of a deficit in responsibility."

What Happened to US Weapons-Grade Plutonium?

Speaking on the issue of Russo-American cooperation in the field of nuclear disarmament, the Russian president drew attention to the fact that had Washington demonstrated strange hesitancy and apparent negligence while fulfilling its obligations under nuclear and chemical weapons treaties.

He noted that despite Russia's calls for cooperation and its openness in the sphere of nuclear disarmament following the collapse of the USSR, the United States had demonstrated a "selfishness" that had seen Russia's national interests ignored.

The president expressed deep concerns over Washington's approach to the implementation of the agreement on weapons-grade plutonium under the Russo-American Plutonium Management and Disposition Agreement (PMDA) signed in 2000.

He noted that Washington's decision to dispose of plutonium by dilution and geological burial does not guarantee the impossibility of getting back weapons-grade material," Putin emphasized, stressing that the Russian Federation has fulfilled its obligations under the US-Russian deal.

For a state proclaiming itself to be a champion in nonproliferation and arms control, it is inappropriate," he said, adding that Western media paid almost no attention to the fact that Russia has completely destroyed its chemical weapons a month earlier.

'No Alternative to the UN'

In the final part of his speech, the Russian president underlined the role of the United Nations, as an organization tasked to create and maintain international stability and order.

According to Putin, there is no alternative to the institution with its universal legitimacy. He stressed that the organization must remain in the center of the international system.

Meanwhile, the Trump administration has been taking steps aimed at reforming the international organization. In September a US-sponsored meeting to discuss the reform of the institution was held at the United Nations.

Putin said that the organization needs reform, but stressed that they must be gradual.

"Reform is needed, perfecting the system of the United Nations is needed. But reform can only be gradual, evolutionary, and of course must be supported by the overwhelming majority of the actors of the international process, by a wide consensus," Putin explained.

Putin Says Rivalry Between States Should Not Develop Into War, Hostilities

Putin Rejects Double Standards, Use of Radicals in Fight Against Terrorism