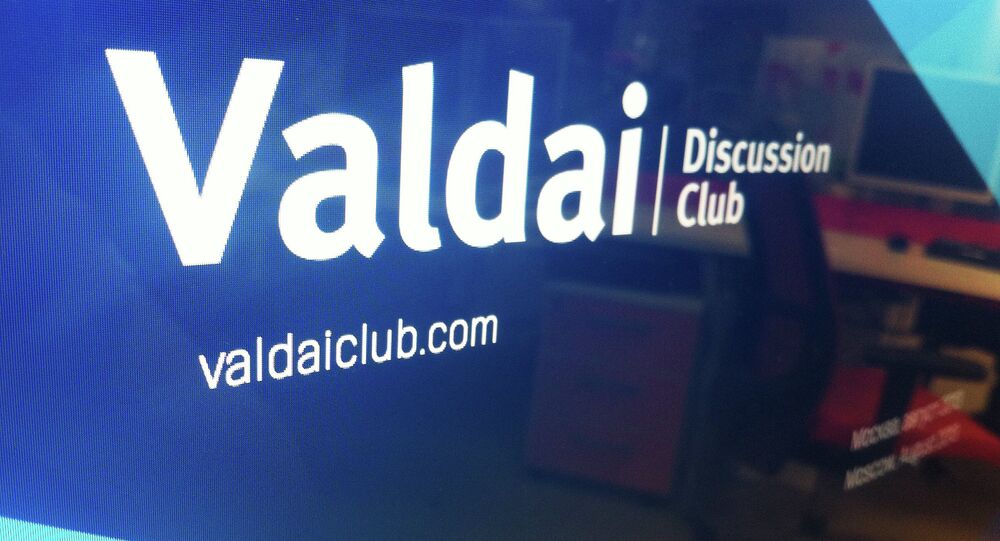 The Russian city of Sochi will host over the next four days the annual Valdai Discussion Club. Internationally-renowned top experts and senior politicians will present points of view on the fast-paced and evolving challenges of the world agenda.

MOSCOW (Sputnik) — Starting Monday, Russia’s Sochi will become the center of global political dialogue for four days as the city hosts the 14th annual meeting of Valdai Discussion Club, a platform which brings together politicians and internationally-renowned experts to discuss the challenges of the modern world.

The four-day program includes nine sessions united under the main topic of the event: "Creative Destruction: Will a New World Order Emerge from the Current Conflicts?" The participants will discuss ways for the international community to overcome differences in geopolitical worldviews, material inequality, environmental changes, and concerns related to the rapid development of artificial intelligence and robotics.

A quarter of a century after the end of the Cold War, the world is out of joint. https://t.co/bD9RtRogaO #valdaiclub pic.twitter.com/iiNGhQ7KF8

​As for the highlights of this year’s forum, the organizers will name the first-ever winners of the Valdai Discussion Club Award, set up in 2016 to honor contributions to the analysis of tendencies that shape modern world politics.

© REUTERS / Francois Lenoir
Lavrov Shares Russian Concerns Over NATO Eastward Expansion With Valdai Experts
The event will be attended by 136 experts from 32 countries.

The Russian delegation expert community will be presented by Chairman of the Valdai Discussion Club Andrey Bystritskiy, editor-in-chief of magazine Russia in Global Affairs Fyodor Lukyanov, former Russian Ambassador to the United States Sergey Kislyak, and others.

Within the framework of the forum, there will also be a special session dedicated to Future Preparedness Index, a joint project by the Valdai Discussion Club and the Russian Public Opinion Research Center (VTsIOM). The Index is aimed at assessing a country’s readiness to meet future challenges.

© Sputnik / Maksim Blinov
Claims of Trump Being Moscow's 'Favorite' in US Presidential Race Used to Manipulate Public Opinion - Putin
The Discussion Club concludes on October 19 with the plenary session dubbed "The World of the Future: Moving Through Conflict to Cooperation," which is set to be attended by senior Russian officials.

The Valdai Discussion Club was established in 2004. Over the years of its operation, the Club’s meetings have been attended by more than 1,000 representatives of the international expert community from 63 nations.

The Club aims to promote political dialogue in order to strengthen peaceful conflict resolution, and provide analysis of economic and social developments globally.

Putin Only Leader to Participate in Valdai Discussion Club-Style Talks