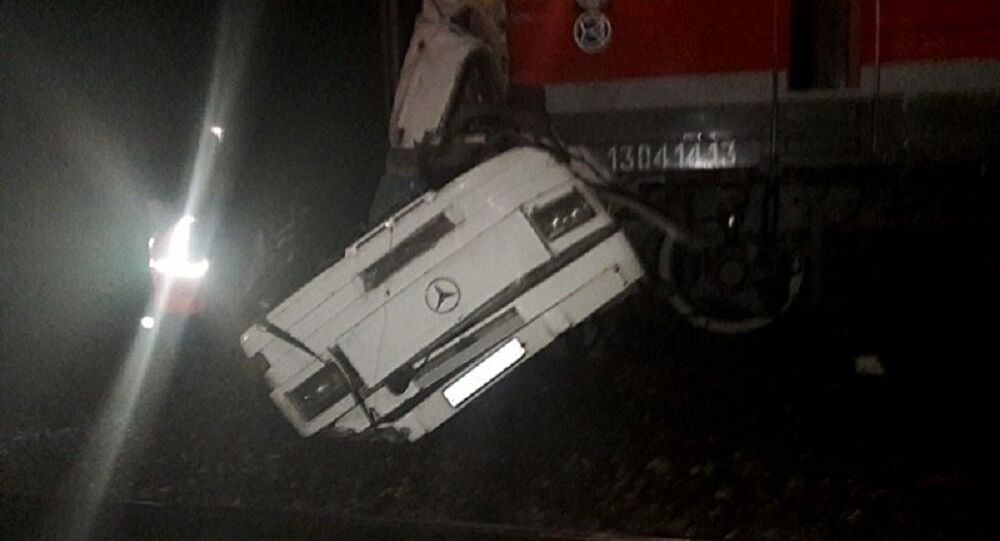 According to local law enforcement, 19 people have died in a crash after a train hit a bus stuck on a railway in the Vladimir region of Russia.

Two Kazakh nationals were the drivers of the bus, one of them died, Kazakh Foreign Ministry spokesman Anuar Zhainakov said Friday.

"According to the latest information, during the road accident in Russia's Vladimir region, there were 55 citizens of Uzbekistan and two drivers, citizens of Kazakhstan, in the passenger bus," Zhainakov wrote on his Facebook page, adding that one driver died.

The Russian investigative committee’s Moscow department for transport said earlier that at least 17 people had died in the collision.

An emergency source has told Sputnik that a child was among those who perished.

© Photo : Russian Emergencies Ministry
Body of 18th Victim of South Russia Bus Crash Found
A central hospital that is caring for those hurt in the collision has told Sputnik five people have been admitted, four in critical condition.

Authorities said the bus drove into the path of the train at a railway crossing on a red traffic light. The Moscow railway authority issued a statement saying the vehicle broke down.

"Tonight, at 3:39 a.m. a bus was passing a railway crossing near the Pokrov station when the engine stalled," its press office said.

A spokesperson for the Vladimir governor said the bus had a Kazakh license plate and the passengers were from Uzbekistan. The regional authorities identified 15 Uzbek nationals as the victims.