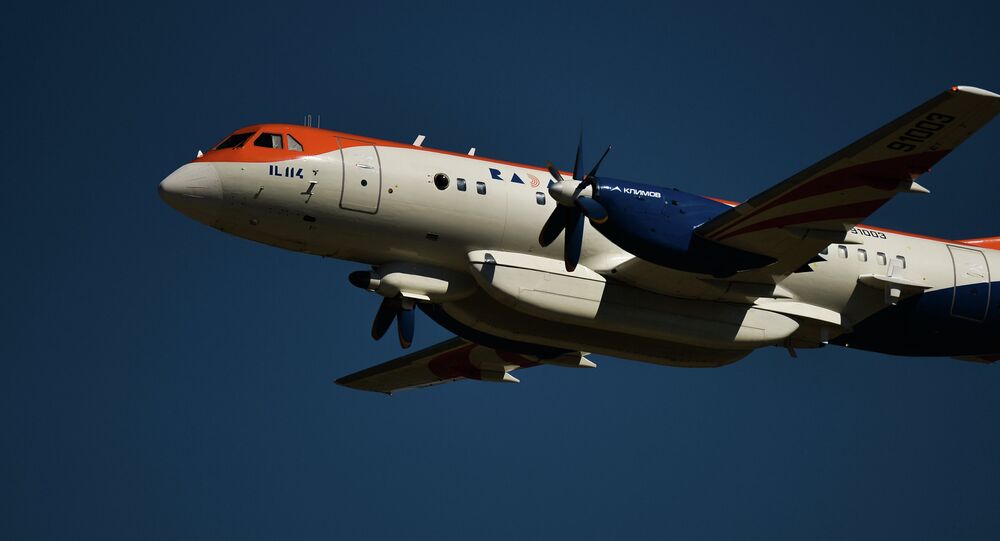 Vladimir Putin specified the further works on the regional Russian airliner Il-114 as one of the top industrial priorities for Russia in coming years.

NOVO-OGARYOVO (Moscow Region) (Sputnik) — The works on production of the Russian Ilyushin Il-114 regional airplanepointed out as well as on the PD-35 advanced engine will be funded not only in 2018, but also in the years of 2019 and 2020, Russian President Vladimir Putin said Saturday.

“As an emergency, we financed these expenses from Rosneftegaz [Russian state company] until 2018, inclusive, while 2019-2020 should be financed from the state budget, I will agree with the Ministry of Finance on that,” Putin said at the meeting with Minister of Industry and Trade Denis Manturov.

The Russian president underlined that the development of Il-114 and PD-35 engine is one of the top priorities for the country.

© Photo : Dmitry Terekhov
New Il-96-400 Passenger Jet to Help Russian Planes Win Back Domestic Market
“We need a regional airliner or otherwise we will always buy everything abroad in this segment. But we need a powerful engine — PD-35. Many projects in aviation [industry] are set to use this engine,” Putin added.

The PD-35 is an advanced engine model for wide-body aircraft. The project is expected to be created with the use of technologies used in the latest PD-14 engines that are planned to be used in the MC-21 airliner

The IL-114 was developed by Ilyushin Design Bureau in the late 1980s for short-haul flights within the Soviet Union. Since then, 20 planes of this type have been manufactured.

Production of the Il-114 was terminated in July 2012 after the Uzbek government decided to change the specialization of the Tashkent Aircraft Plant, where the planes had been manufactured.

As the West imposed sanctions on Moscow in 2014, various sectors of the Russian economy were affected, including agreements on aircraft built and leased abroad. In August 2014, Russian President Vladimir Putin identified the Il-114 as the preferred option for domestic aircraft production, particularly with respect to domestic flights.