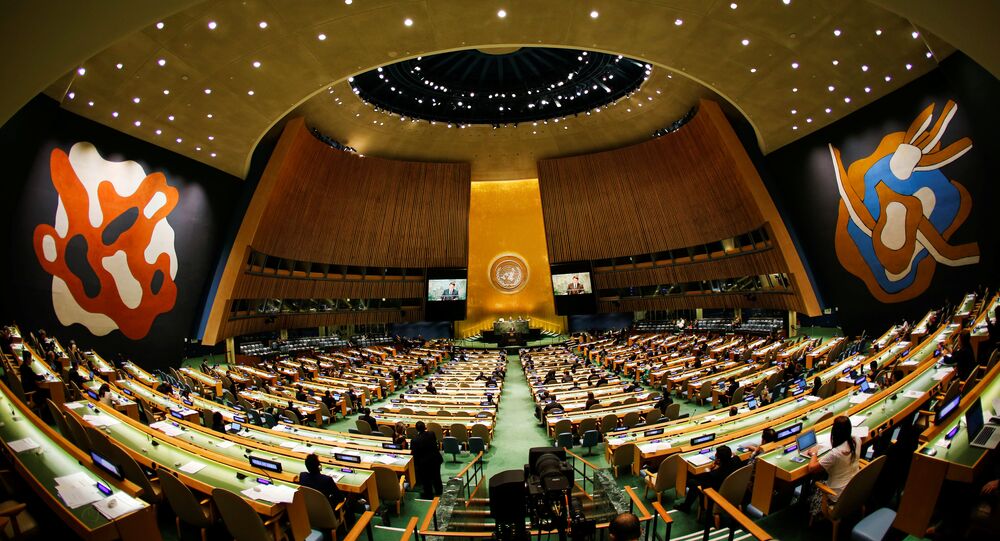 The escalation of tensions on the Korean peninsula, a UN peacekeeping mission in Donbass and Syrian civil war could be among the priority issues that the Russian delegation headed by Foreign Minister Sergey Lavrov will raise during the high-level segment of the UN General Assembly next week.

MOSCOW (Sputnik) — The bilateral agenda of the Russian delegation is also expected to be eventful, as the Russian foreign minister is scheduled to hold several dozens of such meetings on the sidelines of the General Assembly. The talks with US Secretary of State Rex Tillerson are among the most anticipated, as the meeting will be held against the backdrop of the ongoing "diplomatic crisis" between the two countries. Besides, Lavrov is scheduled to meet with UN Secretary-General Antonio Guterres, NATO Secretary General Jens Stoltenberg and French Foreign Minister Jean-Yves Le Drian.

Lavrov's talks with Tillerson on the sidelines of the UN General Assembly will become the sixth meeting of the two top diplomats. Earlier this year, they held meetings in Bonn, Hamburg, Moscow, Washington, and Manila.

© Sputnik / Natalia Seliverstova
Lavrov Tells Tillerson Russia's Conditions for Approving US Draft on N Korea
It is expected that de-escalation zones in Syria, the Ukrainian crisis, and peacekeepers deployment in Donbass, North Korea's missile launches, as well as bilateral issues will become the central topics on the agenda of the upcoming meeting.

The upcoming talks will be held against the backdrop of the ongoing standoff regarding the work of the diplomatic missions of both countries. In July, Moscow reduced US diplomatic personnel in Russia to 455 representatives, the same number of Russian diplomatic staff in the United States at the time. In response to the move, in early September, the United States shut down Russia's Consulate General in San Francisco and trade missions in New York City and in Washington, DC. After Russian diplomats left the diplomatic compounds, US security agents entered the premises and conducted searches there. Moscow has labeled such actions as a "raid" and said it would file a lawsuit over the situation.

Russian Deputy Foreign Minister Sergey Ryabkov expressed hope that Lavrov and Tillerson would send the international community a "positive signal" on the possibility of solving "at least some of the existing problems" after the meeting.

NORTH KOREA NOT CARING A STRAW ABOUT SANCTIONS

The UN Security Council unanimously adopted its toughest resolution yet against North Korea over its latest nuclear test and repeated missile launches almost simultaneously with the beginning of the 72nd Regular Session of the UN General Assembly. However, just three days after the resolution was adopted, North Korea launched a ballistic missile, that flew over Japan and traveled a total of 3,700 kilometers (2,299 miles), which made it a missile capable to reach Guam, where the US military bases are located.

During an emergency meeting on Friday, the UN Security Council condemned recent highly provocative actions of North Korea. Washington called on all countries to unite to address "this global problem short of war", while Moscow stressed the importance of holding "meaningful negotiations" as soon as possible to resolve the crisis.

The need for resuming the six-party talks on North Korea, which were not held since Pyongyang withdrew from the talks in 2009, has been mentioned in the latest UN resolution. Russian President Vladimir Putin and German Chancellor Angela Merkel also underlined their commitment to such negotiations in the latest phone talks on Monday.

In early September, Lavrov said that Guterres may be involved in mediation efforts within the framework of resolution of the Korean peninsula issue, adding that "this may be useful." On Wednesday, Guterres said that he would be glad to provide his assistance to the UN Security Council, that was due to decide which political actions should be taken. The UN secretary-general also noted that he intended to involve in the settlement of the North Korea situation his predecessor on the UN chief's post, Ban Ki-moon.

The multilateral meeting on creating a contact group on Syria will be among the most important talks on the sidelines of the General Assembly.

"We believe that it is important to start making a transition to the political phase of the resolution of the conflict in Syria. The issue related to this contact group and its format will be discussed by the five permanent members of the UN Security Council, including Russia, in New York next week," French Ambassador to Russia Sylvie Bermann told Sputnik on Saturday.

She also announced the plans for meeting between Lavrov and Le Drian on the sidelines of the UN General Assembly in New York next week.

On Friday, the three Syrian ceasefire guarantor states — Russia, Turkey and Iran — have made a breakthrough in reducing violence in Syria by reaching an agreement on all four de-escalation zones, including the one in the Idlib province. The sides also agreed that monitoring in the de-escalation zone in Idlib would be carried out by Iranian, Russian and Turkish forces, while the remaining zones would be maintained by Russian military police.

UN Special Envoy for Syria Staffan de Mistura said Friday he would consult Guterres and the UN Security Council in New York on the results of the sixth Astana talks on Syria before announcing the date of the next round of Geneva talks. De Mistura added that he would also hold meeting with representatives of the countries, which were having an impact on the process of the Syrian settlement.

The Ukrainian issue and the initiative to deploy a UN peacekeeping mission are also likely to be among the hot topics at the upcoming discussion in the General Assembly.

© REUTERS / Rodi Said
At Least 6 SDF Fighters Injured in Syrian Airstrike
In early September, Russian President Vladimir Putin expressed his support for the idea of sending peacekeepers to Ukraine in order to ensure the security of the OSCE observer mission in Donbass. Putin also said the issue should be decided in direct contact with representatives of the self-proclaimed Donetsk and Lugansk people's republics. However, Kremlin spokesman Dmitry Peskov noted that Russia had a flexible position on the deployment of peacekeepers in Donbass.

Guterres said in an interview with RIA Novosti that the United Nations would do everything to help solve the crisis in Donbass if there is a consensus regarding the idea to deploy peacekeepers to east Ukraine.

US State Department official told Sputnik on Wednesday that the option of having UN peacekeepers in eastern Ukraine is worth examining, noting that such force should have a broad mandate for peace and security throughout the occupied Donbass region.

Kiev also insists that the UN mission should be deployed up to the border with Russia. It also refuses to coordinate the parameters of work of UN peacekeepers in Donbass with local militias.

Ukrainian Ambassador to the United Nations Volodymyr Yelchenko said that Ukrainian President Petro Poroshenko was expected to raise the issue of peacekeepers deployment in Donbass on Wednesday during his speech in the UN Security Council.

"The president of Ukraine will address the UN Security Council on September 20, there will be a special meeting on the peacekeepers. I think this will be another opportunity to share our view on the role of the UN mission in Donbass," Yelchenko told the Radio Svoboda broadcaster.

Kiev and Moscow have already prepared separate draft resolutions for the UN Security Council o the deployment of peacekeepers in the Donbass region.

The issue of UN reform will also be brought on the table during the upcoming high-level segment of the UN General Assembly.

On Friday, US Presidential National Security Adviser Herbert McMaster said that Trump would raise the issue of the UNSC reform at the General Assembly. McMaster noted that the United Nations had huge potential, but is should be used "more efficiently and effectively."

© Sputnik / Sergey Guneev
Trump 'Undermines America's Standing in the World' - Ex-US Vice President Biden
It was reported on Thursday that the discussion would be held during Trump's meeting with the world leaders on Monday, a day prior to the US president's speech at the UN headquarters. Following the meeting, the sides may adopt a declaration on broad reforms, proposed by UN Secretary-General Antonio Guterres.

Earlier in the day, Russian Ambassador to the United Nations Vasily Nebenzya said that Moscow probably would not sign the resolution. He noted that none of the ideas proposed by Washington complied with what had been suggested by the Secretary-General, adding that one could not "undertake the UN reform and change the UN through a declaration."

© REUTERS / Toru Hanai
UN Secretary-General Condemns New North Korean Ballistic Missile Launch
Nebenzya stressed that the UN reform should be reformed through the intergovernmental procedures, noting that the document prepared by the United States was a declaration of the countries who shared the same stances on the UN reform, rather that an instruction to the UN Secretary General.

On Friday, Russian Foreign Ministry spokeswoman Maria Zakharova said that Russia supported the initiative for the UN reform and advocated "adjusting the organization to the realities of today’s world while maintaining the United Nations' intergovernmental nature and strict compliance with the principle of separation of its main organs' powers provided for in the UN Charter."

"We support realistic initiatives to rationalize the activities of the UN General Assembly. We prioritize improving working methods, streamlining of overloaded agenda," Zakharova told a briefing.

The high-level segment of the UN General Assembly session will be held on September 19-25. It will bring together heads of state, government officials and foreign ministers from nearly 200 countries.