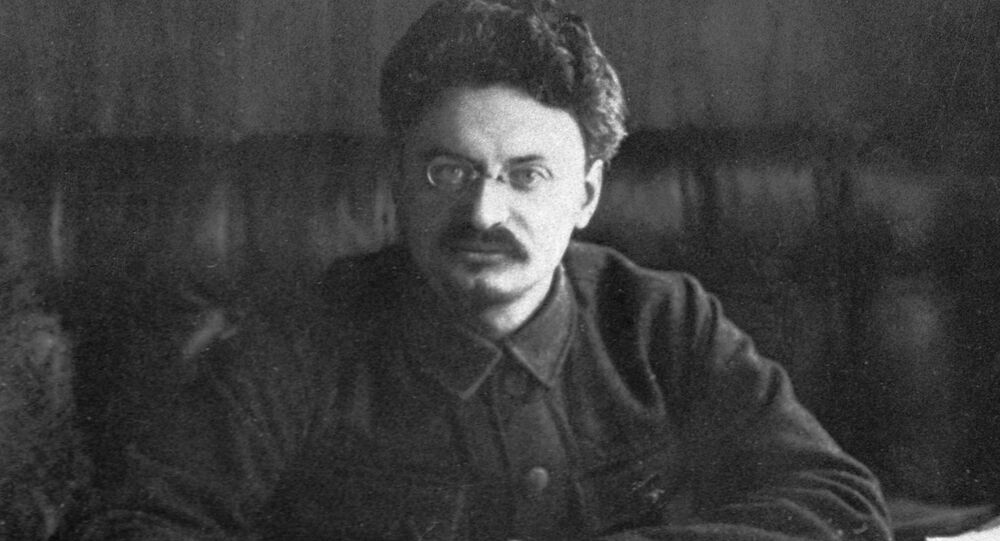 August 21 marked 77 years since the death of prominent Russian revolutionary Lev Trotsky who was assassinated by Spanish-born NKVD agent Ramon Mercader in his house near Mexico City. Sputnik talked to Trotsky’s grandson Esteban Volkov who was in the house when that fatal attack occurred.

“I came to Mexico a year before the assassination. In fact, there were two attempts on his life: on May 24, 1940, when a group of Stalinists led by artist David Alfaro Siqueiros stormed into the house firing indiscriminately into the rooms where Trotsky’s secretaries and assistants worked. My granddad survived by a miracle when [his wife] Natalia hid him in a dark corner,” Esteban Volkov told Sputnik Mundo.

“I was in the next room and they fired a long burst of automatic gunfire at the bed I slept on. Luckily, they missed and I escaped with just a small scratch on my toe.”

© Sputnik /
Trotsky’s Long Shadow Stalks Western Patriots
He added that Lev Trotsky knew that the respite Stalin had given him wouldn’t last long and that new attempts on his life were bound to follow.

“Finally, Ramon Mercader, a Catalan-born NKVD agent got chummy with a young US Trotskyite woman and befriended members of Granddad’s security guards. One day he asked my grandfather to look at one of the articles he wrote. Next time, as Granddad was reading his writings, Mercader hit him on the head with an icepick,” Volkov recalled.

“Granddad gave out a loud scream, the bodyguards rushed in and overpowered the assassin,” he added.

© AP Photo /
Leon Trotsky sings and addresses a huge assemblage during the sessions of the Third International, also known as The Communist International/Comintern, in Moscow in Dec. 1921. (File)

Esteban Volkov said that Trotsky ordered his men not to kill Mercader and this enabled the Mexican police to unravel the whole plot.

When asked how, a century after the October Revolution, he assessed his grandfather’s role in it, Volkov said that Vladimir Lenin and Trotsky were the main heroes of the Revolution.

“Lenin played the key role in the creation of the Bolshevik party and coordinated its work. Trotsky determined the course of the Revolution. Unlike Lenin and Stalin, who believed that a socialist revolution should be preceded by a bourgeois one, he emphasized the role of the proletariat and this is how the victorious Russian Revolution established the Soviets of workers’, soldiers’ and peasants’ [deputies],” Esteban Volkov continued.

He added that during the Civil War, Trotsky created the Red Army and that even military experts on the opposite side of the frontlines acknowledged Trotsky’s contribution because without the Red Army the Soviet Union would simply have not come into existence.

After Vladimir Lenin’s death in 1924, Trotsky stood by the ideals of the Revolution.

“He said that, with the Red Army’s help he could have seized power in a matter of just 15 minutes, but he was against a military bureaucratic dictatorship. He wanted to stay true to the principles of the October Revolution,” Volkov emphasized.

“Then, just as Stalin was purging the Leninist leadership in the 1937-1938 trials, Trotsky organized a series of counter-trials in Mexico-City to expose the false nature of Stalin’s 'justice.'''

When queried about the fate of his family, he said that all of them were prosecuted and eventually killed.

“My father, Platon Volkov, was deported and executed. Trotsky’s elder son, Lev Sedov who lived in Paris, died under strange circumstances. He died after an operation to remove his appendix and was apparently poisoned,” he continued.

“The other son, Sergei Sedov, who stayed out of politics, was executed nonetheless. My grandmother, Trotsky’s first wife, died in a labor camp, and my mother committed suicide after she was denied permission to return to Russia to reunite with her husband and daughter,” Volkov continued.

It wasn’t until the era of Mikhail Gorbachev that Esteban Volkov could finally come to Russia to meet his half-sister who died shortly thereafter of cancer.

© Sputnik /
Flashback to 1917: How the Russian Revolution Changed the World
While in Mexico, Esteban Volkov founded the Institute on the Right of Asylum. Trotsky said that there was a ”planet without visas,” and that Mexico was the only country to grant him asylum when Lazaro Cardenaz was President.

“There is no country in Latin America whose people haven’t found refuge in Mexico. During the 1930s, thanks to President Cardenaz, Mexico accepted Spanish refugees who had fled their homeland after the Civil War. This had a favorable impact on Mexico itself as many of those newcomers were intellectuals and academics,” Volkov explained.

Lev Trotsky was chairman of the Petrograd Soviet from 1905 until 1917 and played a leading roe in the 1917 October Revolution. After the Bolsheviks took power, Trotsky serves as a peoples Commissar of Foreign Affairs and later went on to become the founder of the Red Army which emerged victorious from the 1918-1920 Civil War.

During the 1920s Lev Trotsky, a stirring public speaker and a prominent Marxist theorist, was at the forefront of anti-Stalinist opposition. In 1929 he was expelled from the Communist Party and sought political asylum abroad.

Mexico was the only country ready to accept him, thanks much to his friendship with the great Mexican artist Diego Rivera.

Here years later Trotsky was assassinated  by Catalan Communist Ramon Mercader who acting on Josef Stalin’s orders, killed Trotsky with an icepick he had smuggled into the fugitive’s fortified residence in Coyoacan, near Mexico City.