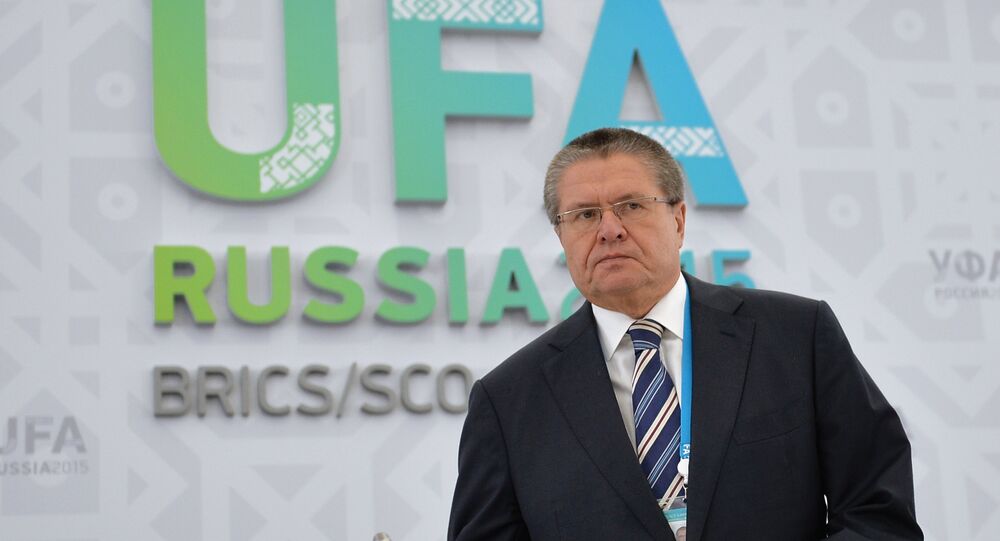 Moscow's Zamoskvoretsky District Court will begin the hearing of the case against former Russian Minister of Economic Development Alexei Ulyukayev on Tuesday.

© Sputnik / Iliya Pitalev
Moscow Court to Begin Hearings in Ex-Minister Ulyukaev Case August 8
MOSCOW (Sputnik) — Ulyukayev is the first federal minister to be prosecuted in modern Russia. The highest-ranking defendant, who is charged with taking a bribe, is facing up to 15 years in prison and yet, he denies the accusations.

Ulyukayev was detained on charges of taking a $2-million bribe. The Investigative Committee claims that it has testimony of witnesses, audio and video recordings and "characteristic traces on fingers." The criminal case against the minister was opened on a claim from Rosneft representatives. He is said to have been caught red-handed as he was leaving the Rosneft office. The alleged bribe was found in his car.

Investigators assume that Ulyukayev received the bribe for the ministry’s positive assessment that allowed Rosneft to purchase state-owned shares of Bashneft. The legitimacy of the deal itself is not being disputed.

Defense lawyers have not revealed their evidence yet but noted that Ulyukayev was not guilty at all.

The case was opened on November 15 and the preliminary investigation was finished only six months later, on May 23. The ex-minister and his lawyers took less than two months to study 30 volumes, after which the case was forwarded to the Prosecutor General’s Office for approval of the indictment. Within three days, the Prosecutor General’s Office concluded that there were no more obstacles for the trial and forwarded the case to the Zamoskvoretsky District Court of Moscow.

© Sputnik / Sergei Guneev
Arrest of Ulyukaev to Have No Impact on Russian-Japanese Talks
Since the investigation started, Ulyukayev has been under house arrest in his apartment in Minskaya Street. He is banned from leaving his home or changing his place of residence without approval, speaking to witnesses, journalists or anyone except for his close relatives. The former minister is also not allowed to send emails or use any means of communication. He may make a call though if he needs an ambulance or an emergency service.

Initially, Ulyukayev was prohibited from leaving his apartment but subsequently, his lawyers managed to get him allowed two-hour walks.

WHAT WILL HAPPEN IN COURTROOM

The preliminary hearings will take place on Tuesday and will be held behind closed doors in accordance with the Criminal Procedural Code.

During preliminary hearings, court usually issues rulings regarding extension of pre-trial restrictions, exclusion of certain evidence from the case or, on the contrary, inclusion of new important findings. Court may determine the list of witnesses who will testify during the trial. The judge will also decide whether Ulyukayev’s trial will be open or closed to public.

At this point, defense lawyers may still request the case to be returned to the prosecutor’s office or heard by another court. If the Zamoskvoretsky Court judge does not grant these motions, the dates of the main hearings, on the merits when court examines the evidence of the prosecution and defense, and later issues a verdict based upon it, are likely to be also announced on Tuesday.