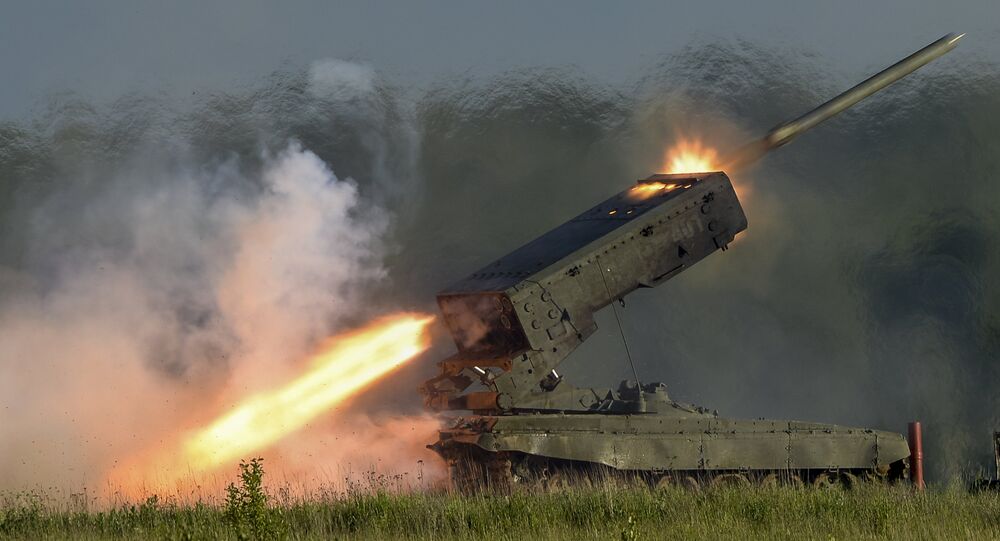 © Sputnik / Kirill Braga
Russia's TOS-1A 'Sunheat' Heavy Flamethrower Just Nearly Doubled Its Range
It has gained a uniquely nasty reputation because of the horrifying effects of its fuel-air explosive warheads.

The TOS-1A fires thermobaric rockets, which disperse a cloud of flammable liquid into the air around the target, and then ignite it. The effect of their explosion is absolutely devastating as the blast lasts significantly longer and the resulting shockwave is much hotter and more powerful than anything other conventional warheads can boast of.

As if that was not enough, all the oxygen in the vicinity of the explosion is also consumed creating a partial vacuum. All this makes the TOS-1A a horrifying weapon against enemy personnel hiding in bunkers and caves and has earned it the well-deserved title of “the most devastating explosive weapons short of tactical nuclear weapons around.”

Vladimir Medvedev, the chief designer at SPLAV R&D Association, which developed the system’s missile, told  Zvezda TV that it was originally meant to have a range of 3.,5 kilometers (2.3 miles), but was later upgraded to fly up to six kilometers (three miles).

The minimum range of 600 meters (yards) was preserved though, which means that the Solntsepyok can fire virtually point-blank.

© Sputnik / Alexander Vilf
Syria Fires TOS-1A Solntsepyok Flame-Thrower Against ISIL MIlitants (VIDEO)
The missile travels along a very steep trajectory literally “falling” on an enemy’s head. Targeting is done with the help of an optical sight with a laser rangefinder and ballistic calculator. They position the launcher at a proper angle and all the operator needs to do is pull the trigger.

The TOS-1A is the only such thermobaric flamethrower around, but Vladimir Medvedev believes that impressed by its performance in real combat situations, foreign weapons designers are likely to start developing heir own such systems.

Meanwhile, unwilling to rest on its laurels, the SPLAV designers are already setting their sight on a new generation of heavy flamethrower systems lovingly dubbed “Tosochka” (Baby TOS).

In addition to the TOS-1A’s predecessor, the Tosochka, already included in the 2018-2025 State Armament Program, will also have a wheeled chassis making it ideal for use in the desert and for potential buyers from the Middle East.

The Tosochka is expected to be showcased during the Army —2017 international forum scheduled for later this month.