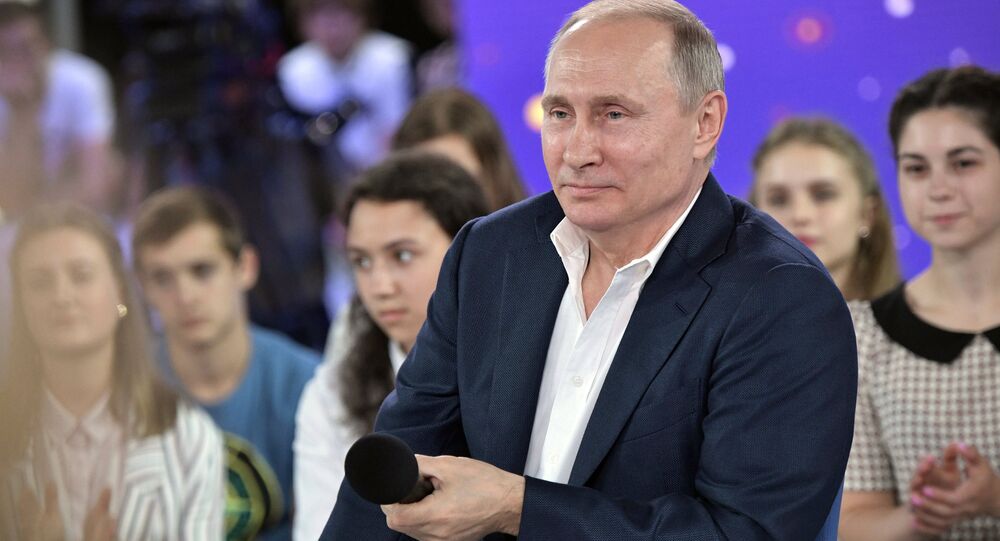 Russian President Vladimir Putin held a meeting on Friday with children of the Sirius children’s center in Sochi and shared some details regarding his personal life and career, plans for 2018 presidential race and discussed some issues of Russian economy and science.

© Sputnik / Alexei Druzhinin
Putin Sheds Light on Schedule, Says He Has Enough Time for Friends, Sports, Music
MOSCOW (Sputnik) — The Sirius center was founded in 2013 based on the infrastructure for the Olympic Games, on Putin's initiative. The president is the chair of the center's board of trustees.

A number of questions, asked by the children, were devoted to some aspects of president's personal life, including using of social networks, hobbies, personal values and career among others.

In particular, Putin admitted that he did not have any accounts on social media networks, however, added that he knew that there were some 5,000 social media accounts using his name.

"I have nothing to do with any of them, just so it is clear to you and other users. It is not me writing under my name. I hope they say nothing bad, but either way it is not me," Putin said.

When asked about key values of his life, the president said they are love, freedom and life itself.

"The first is life itself. This is the greatest value. Then love and freedom," Putin said speaking to children, adding that the collapse of the Soviet Union was the event that impacted his life the most.

The president also disclosed a pseudonym that he used when studying at an intelligence school, a special training institution for intelligence agents.

"When I studied at an intelligence school, I had a pseudonym — 'Platov.' Everyone had pseudonyms, because such job requires certain level of conspiracy," Putin said, adding that using a pseudonym now seemed absurd to him.

Speaking about his life the president said that he had always been engaged in sports and could do 15-17 chin-ups, however, admitted that he had never participated in military and patriotic games.

Putin also said that he had good relations with parents and always listened to their advice and recommendations, however, the final choice he had always taken by himself.

Putin said that he had not yet decided whether he would run for president in 2018, when asked about his future career plans.

"I have not decided yet, I’ll see. Elections are in 2018, there is still time before the electoral campaign, so we will see," Putin said.

According to Putin, it is the Russian people that will decide who will become the next Russian president even if there is an established political practice of suggesting successors before leaving the post.

"I want to say that, according to the established international practice, if a leader of a party, a country or a government leaves [his post], generally, but not always, he would introduce someone or recommend to pay special attention to a particular person as to someone who will head a country's government or a party. But in the end, the people will be the ones to decide through a direct and secret vote who will head the country, as provided for under the Russian Constitution. That is why, no matter who recommends whom, it is the Russian people who will make their personal decision," the president stressed.

The president also admitted that he was asked to amend the constitution to extend the term of the head of state in office, but he did not and will not do that.

The humankind is on the brink of a leap forward, Putin pointed out at the meeting with the Sirius children.

"Global change is happening all the time, but at a different speed. In the Middle Ages there was a certain speed of change, in the 20th century it is different, these days, the speed has significantly grown. It is connected to the accretion of knowledge: the more knowledge the humankind has, the faster the changes. Besides, there is such a phenomenon as 'gradual accretion followed by the leap.' So we seem to be on the cusp of the leap forward," Putin said.

© Sputnik / Michael Klimentyev
Humankind About to Experience New Development Leap Forward - Putin
According to the president, Russia will allocate about $850 million to support the system of grants for scientific researches and support young specialists in different areas.

Putin added that the development of biotechnologies is one of the key directions in modern science, and the state will fully support researches engaged in this area.

The Russian president also noted that technoparks for young scientists and specialists are currently being created in 24 regions. In addition, the authorities will try in 2018 to raise the salaries of scientific institutions employees to 200 percent of the average salary level in the economy.

The head of state also proposed to expand the list of competitions on scientific projects, and promised to think about the benefits for students who take an active part in them.

OIL NOT TO BE OVER SOON

The children also asked the president about country's energy future, in particular, how the situation will develop when Russia runs out of oil, gas and coal.

"It will not happen soon, more and more reserves are being discovered, this applies to all hydrocarbons — oil, gas and coal," Putin said.

The head of state stressed that Russia should be on the brink of progress in the development of renewable resources.

"The whole world is working on hydrogen energy, renewable energy, biofuels. The renewable resources are wind, tides of waves, solar energy. The question is that all this must be effective and cheaper than hydrocarbons. We need to think about this today," Putin added.

MARS AND SECRETS OF THE UNIVERSE

The president also talked about Russia's plans to explore Mars and said that Russia would continue to participate in joint work with the Europeans to develop this direction.

"I do not remember exactly, but in my opinion, in 2020 we plan together with the Europeans to make another attempt (landing on Mars), but we will make a landing complex. I hope that we will do it well and we will succeed," Putin told the children.

He noted that further work will consist of moving to the satellites of Mars and landing an apparatus there.