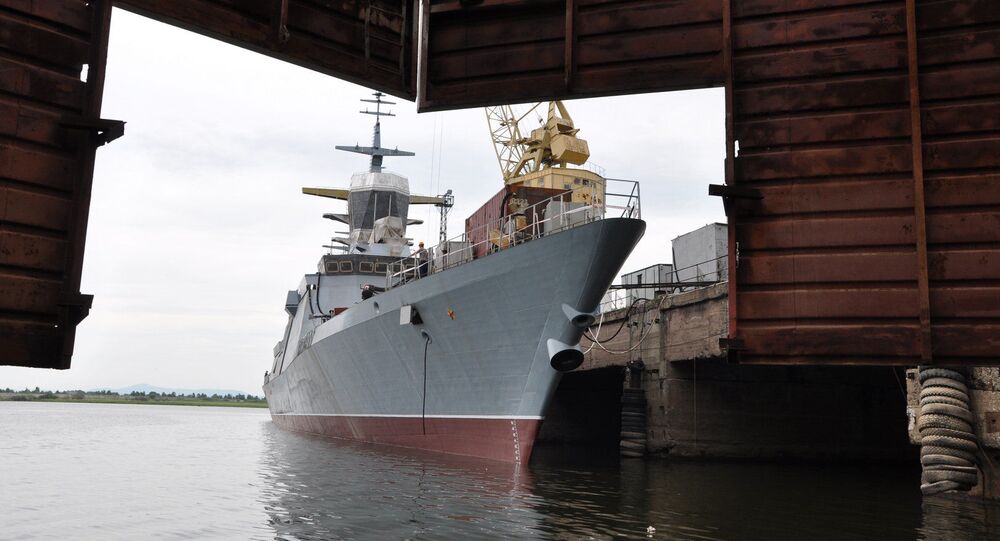 The Sovershenny – the newest class of corvette in the Russian Navy – has successfully completed sea trials and will soon enter service with the Pacific Fleet, the head of the of the Eastern Military District’s press service for the Pacific Fleet, Captain 2nd Rank Vladimir Matveev, told reporters on Tuesday.

In an interview with Sputnik, the editor-in-chief of Arsenal Otechestva (Arsenal of the Motherland) journal Viktor Murakhovsky said that since Russia’s Pacific Fleet’s main task is to protect the country’s sea borders in the Far East, the Sovershenny fits this purpose just fine.

© Photo : Severnaya Verf Shipbuilding plant
Russian Shipyard to Launch New Corvette on Friday
The corvette’s main armament consists of eight Uran-U launchers with Kh-35 anti-ship missiles, each armed with a 145 kg fragmentation warhead powerful enough to blow a destroyer or any other smaller ship out of the water up to 260 kilometers (161 miles) away.

The subsonic Kh-35 missiles boast a high degree of immunity to enemy countermeasures and are equipped with has  inertial guidance and active radar homing systems.

The Sovershenny’s defensive armament is equally impressive featuring the Redut air-defense missile system with a range of up to 150 kilometers (about 93 miles), an A-190 100 mm cannon and a quartet of Paket-NK 330 mm torpedoes.

© Photo : Amur Shipyards
Brand New Russian Heavy Corvette Bristling With Advanced Weapons Starts Sea Trials
The corvette uses stealth technology and its radar signature is reduced thanks to hull architecture and the use of radar-absorbent fiberglass. The modular design allows for space-efficient integration of weapon systems and/or replacement by alternative weapon systems.

Even though they pack less firepower than cruisers, missile corvettes have performed excellently in the Syria and are a force to be reckoned with.

With the coastal defense mission first and foremost, corvettes are quite capable of out-of-area operations and their serial production reflects the growing capacity of Russian shipbuilding industry.