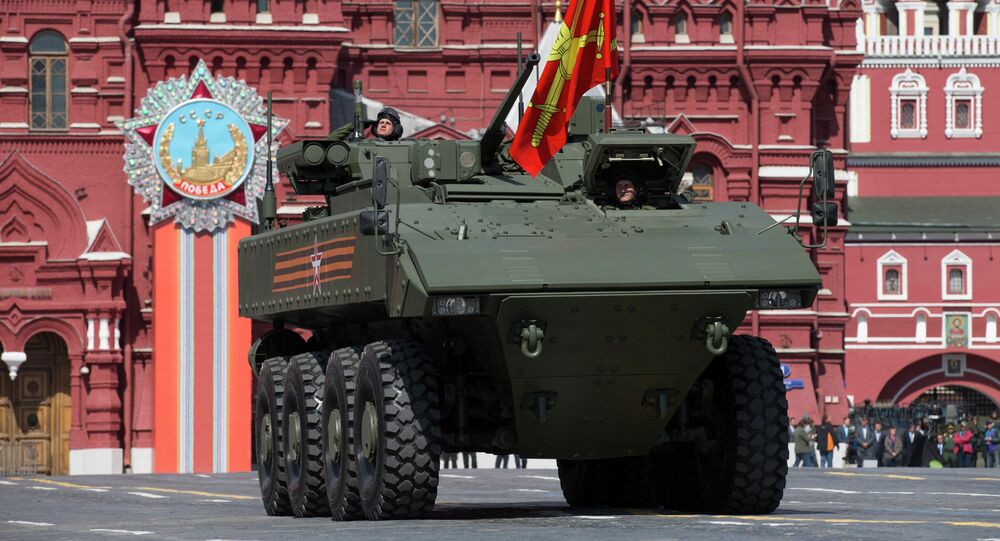 Russia’s new Bumerang armored personnel carrier is a technological marvel, which is unrivalled in the world, the head of the Military-Industrial Company, Alexander Krasovitsky, told Izvestia.

© Wikipedia / Vitaly V. Kuzmin
Like Deadly Legos: New Details on Russia's Bumerang APC/IFV Combat Platform
“The Bumerang is an engineering breakthrough bristling with space-age technology, including an armored upper hemisphere. The vehicle can be remotely-operated, which means that it is essentially a robot,” Krasovitsky said.

He added that the Bumerang’s formidable protection against precision weapons make it virtually “unkillable.”

“Bumerang is a cutting-edge program which is taking our entire industry to an entirely new level. Its new engine built in Yaroslavl ushered in a real industrial revolution because Russia never had such an engine before,” Krasovitsky continued.

He also said that, unlike its BTR-82A predecessor, the Bumerang APC, already ordered by the Armed Forces, the National Guards and the Interior Ministry, is an all-weather vehicle, very reliable, better armored and ensuring better observation in amphibious mode.

According to Alexander Krasovitsky, the Bumerang is unrivalled in the world because it boasts technology that is more advanced and cheaper compared to what Finland’s Patria of the US Stryker can offer.

“We are already getting orders [for Bumerangs] from abroad, but the vehicle remains classified. We are not allowed to unveil its technical characteristics, let alone discuss the price. I’m sure that once the stamp of secrecy has been removed, we and Rosoboronexport will be able to sell it abrad,” Krasovitsky told Izvestia.

He added that work on the Bumerang, which was unveiled to the public during the 2015 Victory Day parade in Moscow, is in its final stages now.

The Military-Industrial Company (VPK LLC) was selected to develop the Bumerang platform in 2011. The VPK LLC was established in 2006 to develop wheeled armored vehicles, primarily BTRs and Tigrs.

Over 40 leading Russian enterprises are involved in the development of the state-of-the-art Bumerang APC.