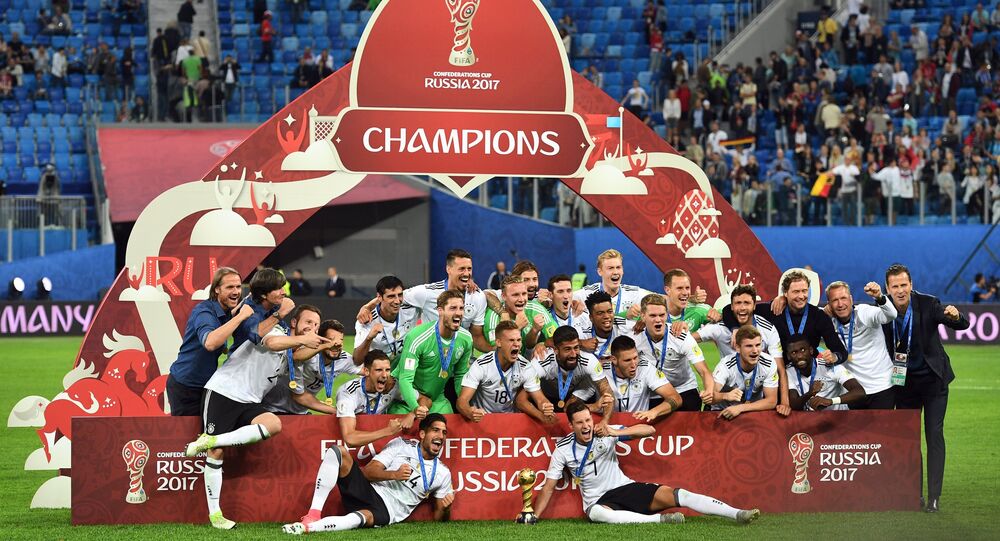 The world media heaped praise on Russia for the great job it did hosting this year’s Confederations Cup football tournament, and sees this as a sign that Russia is well prepared for the 2018 World Cup finals.

The BBC, which in February released a documentary about “Russia’s hooligan army,” had to admit the complete absence of any racist slurs during the Confederations Cup games.

“Despite pre-tournament fears, there have been no reported incidents of racism, the atmosphere around the tournament has been good — and there has been some pretty decent football too,” the BBC reported.

BBC reporter Mani Djazmi said: "In terms of organization, the Confederations Cup has been well run and, especially in Moscow, well received.”

The UK Guardian praised the organizers for the warm welcome they had accorded the foreign fans.

“Russia has eased fears ahead of the 2018 World Cup by delivering a friendly, organized dress rehearsal. Hooliganism and racism were not a problem during the Confederations Cup and may not be one at the World Cup either,” the newspaper wrote.

In an equally laudatory comment, Australia’s Gold Coast wrote, “The main point of the Confederations Cup is as a dry run for the real business of hosting a World Cup. And in that Russia passed with flying colors.”

“The organization has been flawless, the welcome universally friendly and […] the facilities of a world class standard,” it added.
NZ Herald reporter Michael Burgess was deeply impressed by the tight security at and around the stadiums.

“The security process to enter each stadium involves a rigorous pat down by an unsmiling, but friendly, police officer. It's not the cursory one you might expect in New Zealand; this is the real deal and if there was a 50 cent piece in your sock they would find it,” Burgess wrote.

“This is serious business — and so it should be. The security, as one might expect, is pretty high. Given what has happened on the European continent over the last 12 months it's understandable, and actually quite a relief,” he added.

“There were no problems at the Confederations Cup whatsoever. If this is what a problem tournament looks like, then I wish that all our tournaments looked the same,”Infantino said.

Lebanon’s Al-Akhbar wrote that Russia had proved that it is 100-percent ready to host the 2018 World Cup.

“From the very outset the Russians proved their ability to host a larger caliber tournament without making a single mistake that could sully their country’s success,” the newspaper wrote.

The 2017 FIFA Confederations Cup ran from June 17 to July 2 in Sochi, Kazan, St. Petersburg and Moscow.

In the final showdown on Sunday, Germany scored a hard-won 1:0 victory over Chile.