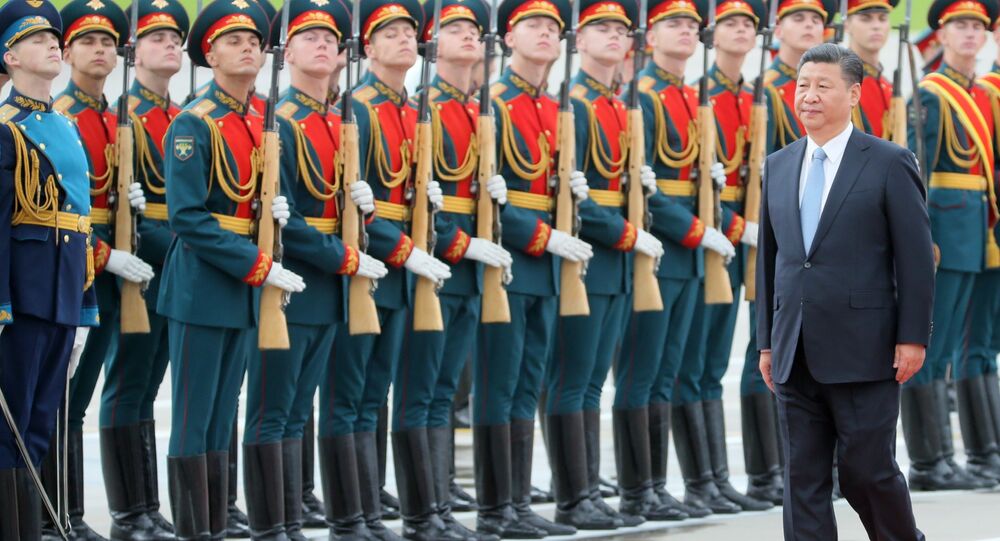 Chinese President Xi Jinping has arrived in Russia for a two-day official visit at the invitation of Russian President Vladimir Putin and was met by Russian Deputy Foreign Minister Igor Morgulov as well as the ambassadors of the two countries.

© AFP 2020 / HOW HWEE YOUNG
Russia, China Preparing Dozens of Deals Ahead of Xi's Visit to Russia
MOSCOW (Sputnik) — This visit is Xi's sixth trip to Russia during his presidential tenure, and the planned meeting with Putin will be the 21st one.

According to the Chinese Foreign Ministry, the presidents will have a thorough exchange of views on bilateral issues, important international and regional issues, as well as issues of mutual interest. On July 4, there will be a separate meeting with Russian Prime Minister Dmitry Medvedev, at which cooperation in trade, energy, industry and transport infrastructure will be discussed.

Two joint statements are expected to be the main political outcomes of the visit. The first agreement concerns bilateral relations and will be a plan for the development of China-Russia relations and cooperation in various fields. The second statement will deal with international issues, in which Russia and China will declare a common position on important regional and international issues.

"I am sure that the current visit will be very fruitful and would contribute to the stable development of China-Russia relations, comprehensive partnerships and strategic cooperation," Xi said after the arrival.

The Chinese official added that he expected an effective conversation with Russian President Vladimir Putin.

"[I expect a] comprehensive exchange of views with President Putin aimed at deepening bilateral ties and promotion of multifaceted cooperation, as well as the actual issues of international and regional agenda of mutual interest," Xi said, expressing confidence that new agreements would be reached by the two leaders.

The ongoing visit is Xi's sixth trip to Russia during his presidential tenure, and the planned meeting with Putin will be the 21st between the two leaders.

Russia, China Preparing Dozens of Deals Ahead of Xi's Visit to Russia