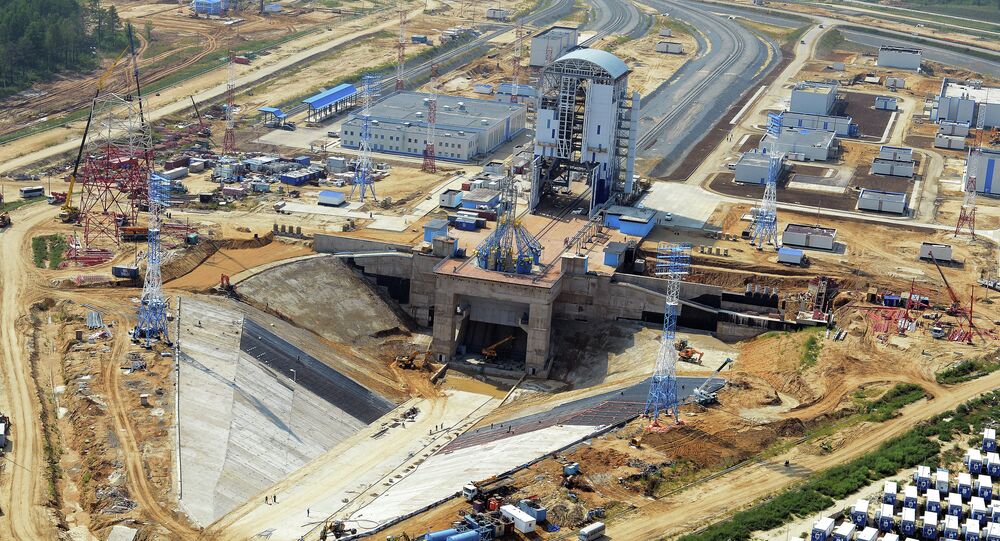 MOSCOW (Sputnik) — Vostochny is expected to reduce Russia's dependency on the Baikonur space center in Kazakhstan. Baikonur is on lease to Russia until 2050.

"First two, then five are planned next year, then onward and upward," Rogozin said in an interview.

Russia's Center for Ground-Based Space Infrastructure Facilities (TsENKI), which is the operator of Russia's cosmodromes, has to determine the contractor for the construction of the second phase of the Vostochny cosmodrome due to begin in 2018, Rogozin added.

According to Rogozin, military construction specialists will also be involved in carrying out some of the most sophisticated tasks.

"The second phase of the Vostochny space center construction will start in 2018. Technically the project is ready, it has passed all necessary expert evaluations, and it is now up to Center for Ground-Based Space Infrastructure Facilities TsENKI that will have to determine the contractor," Rogozin said.

Vostochny has been under construction since 2012 and is expected to reduce Russia's dependency on the Baikonur space center in Kazakhstan, which is on lease to Russia until 2050. Russia carried out a maiden space launch from the Vostochny cosmodrome on April 28. It involved a Soyuz-2.1a light class space rocket, with three research satellites.

Launches of Soyuz-2 carrier rockets with commercial cargo will be continued at the launch site at Vostochny cosmodrome, Rogozin stated.

"At Vostochny [cosmodrome], we will continue launches of Soyuz-2 rockets with commercial cargos on that launch site and using that technical complex, which are already built," Rogozin said.

According to Rogozin, when making this decision, the Russian side proceeded from the certain progress achieved by US private space companies, including the rocket first steps’ return-to-flight technologies under the development of Elon Musk. This decision was supported by the Russian President Vladimir Putin.

"We just physically do not have the right to yield the launch services market to anyone. We have always been leaders in this market and had to make some decisions. So changes in the position, in terms, in objects that should be ready, are connected with our reaction to the events in this launch services market and to the need to create new launch vehicles," Rogozin said.

Russian Deputy Prime Minister also said about the first launch of Russia's Federatsiya (Federation) spacecraft, which is tentatively expected in late 2024 after unmanned test launches from the Baikonur space center.

"First there will be test launches of the manned spacecraft without a crew… then with the crew in late 2024," Rogozin said, noting that the launch will be carried out from the Baikonur space center.

The launch pad on the Russian-used Baikonur Cosmodrome in Kazakhstan employed for launching Zenit carrier rockets will be reconstructed as a modern Soyuz 5 rocket launch pad, Rogozin stated.

“In terms of saving budget resources and the best use of technological solutions, in parallel with the Vostochny [Cosmodrome], we are starting to build, or rather to reconstruct, the existing Zenit launch pad at Baikonur into a Feniks and Soyuz 5 launch pad,” Rogozin said.

In June, Rogozin said the new Soyuz 5 carrier vehicle’s first launch is planned for 2022, with Russia increasing its commitments to creating and financing the rocket and Kazakhstan modernizing the launch pad.