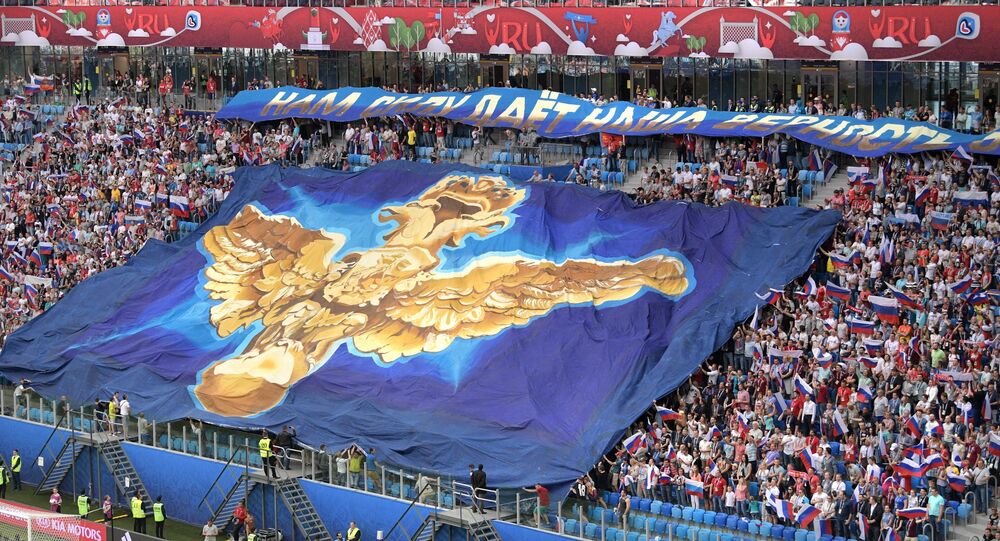 Stan Collymore said that, judging from the games already played, the stadiums in Moscow, St. Petersburg and other cities are in excellent shape and 100-percent ready to host the 2018 World Cup.

“Russia is ready for the World Cup in 2018 and I hope that at the same time next year we’ll be in the middle of an equally fantastic world cup tournament,” Collymore noted.

He also praised the high quality of security at and around the stadiums.

© REUTERS / John Sibley
FIFA President Thanks Russia for Successful Confederations Cup Organization
When asked about the fears spread in the West about the threat allegedly posed to foreign fans by Russia’s so-called “hooligan army,” Collymore added that he had no issues with that at all.

He added that the people he had talked to while in Russia were very friendly and kept asking questions about life in the UK.

“The hooligan problems I’ve seen in Edinburgh, Glasgow and Manchester during the past 30 years are exactly the same. I think the problem about Russian fans has been blown way out of proportion,” Stan Collymore noted.

He also said that as a country of more than 140 million people, Russia is a multiethnic nation and that Kazan will be the first Muslim city on the planet to host a World Cup game next year.

Speaking about his expectations of next year’s World Cup in Russia, based on the experience of Russia’s hosting the 2017 Confederations Cup games,

Stan Collymore said that in terms of security, the situation at Russian stadiums is fully in line with international standards and that people and their baggage are carefully checked at the entrance to the stadiums.

“People also log on to a website, get their fan ID and enjoy free travel across the city. The website also provides you with security information, how to get to the stadiums, etc. It is good news to fans and players and it really whets the appetite for next year,” Stan said.

He added that Russia is a very modern, 21st century country.

“When you walk around Moscow or St. Petersburg you are going to get exactly the same as in New York, London, Berlin or Paris. That’s one of my reasons for coming out and enjoying this project,” he continued.

He described World Cup events as a galvanizing force that brings people from all around the world together once every four years.

“That’s why football is so important, it shows that we have much more in common than what divides us,” he concluded.

© Sputnik / Alexei Druzhinin
Confederations Сup: 'Final Rehearsal' Before the 2018 FIFA World Cup in Russia
Germany defeated Mexico in the second semi-final match and will now face off against Chile in the final showdown at Krestovsky Stadium in St. Petersburg on Sunday. Kickoff time is 6 p.m. GMT.

After the game, fans will be able to enjoy the memorable closing ceremony of the 2017 Confederations Cup.

According to organizers, the event will honor previous winners of the tournament and feature two-time FIFA World Cup winner Ronaldo.

More than a thousand people will take part in the ceremony, which will feature a mix of classic and modern dance, pantomime, circus acts and hip hop.

Confederations Cup 2017 is Very Important for Russia, Here's Why