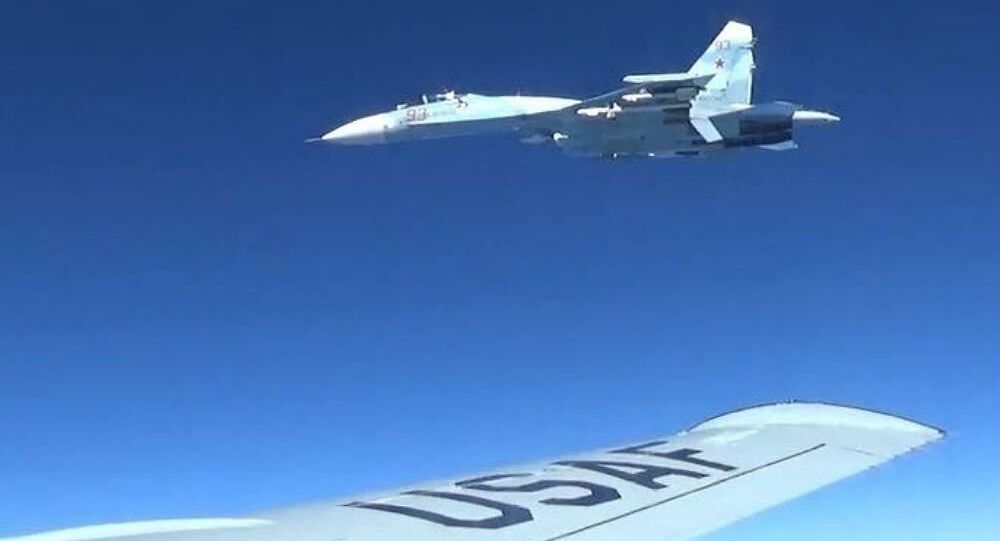 The number of reconnaissance aircraft intercepted along Russia’s border from June 12-18 was unprecedented, even by Cold War standards, according to Russian military expert Konstantin Sivkov.

According to the newspaper, the intercepts were conducted by MiG-31 and Su-27 jets of the Russian air defense alert forces.

© Photo : Youtube / Телеканал ЗВЕЗДА
Closest of Calls: WATCH Su-27 Chase NATO F-16 Away From Russian Defense Minister's Plane
For example, on June 19, an RC-135 plane was identified and intercepted by a Su-27 jet over the Baltic Sea while approaching the Russian border.

"The number is unprecedented, especially taking into account the fact that there is no Cold War today. At that time, we saw an average of seven-eight interecepts a week. But today the number is much higher," Konstantin Sivkov, a Russian military analyst and president of the Academy for Geopolitical Problems, told Sputnik.

© AFP 2020 / Greg WOOD
Why NATO's Increased Reconnaissance Activity 'Comes as No Surprise to Russia'
The expert expressed concern over the situation because the majority of the intercepts occurred in the European part of Russia.

Sivkov pointed out that the activity may be related to the balance of power in the Syrian conflict, which is currently not in favor of the US and its allies.

"Now, the Syrian Army and its allies may reach the Syria-Jordan border and cut opposition forces from American bases in Jordan, which would be unacceptable for the US. This is why the Pentagon launched strikes on Syrian forces. They are testing the waters," Sivkov said.

He suggested that it cannot be ruled out that Moscow will support Syrian forces, which means the risk of a military confrontation between the US and Russia in Syria.

"This is the reason while the US and its NATO allies have increased the number of reconnaissance flights near Russia’s border," he concluded.

In turn, former commander of the Russian Air Force Pyotr Deinekin said that the increase in NATO’s reconnaissance activity can be explained by a recent exercise of the alliance in the Baltic Sea.

"As for the Baltic Sea, the reason is that NATO held drills there and US aircraft, including RC-135 and B-52 strategic bombers, were flying over neutral waters there. In addition, there was an incident when NATO jets flew by a Russian plane carrying the Russian defense minister," he told Sputnik.

© CC0
Tensions in the Air: NATO-Russian Aerial Intercepts Intensify Amid Escalation in Europe
On June 21, a NATO F-16 fighter aircraft made an attempt to approach the plane carrying Russian Defense Minister Sergei Shoigu over neutral Baltic waters, but was promptly chased away by a Russian Su-27 fighter jet.

Furthermore, Deinekin said that the number of reconnaissance flights near the Russian border is normal.

"Taking into account the size of Russia’s territory, it is quite normal," he said.

He added that Russian jets are scrambled each time when it is needed to identify an object approaching the Russian border.

New Version of US-Japan Interceptor Fails to Shoot Down Missile