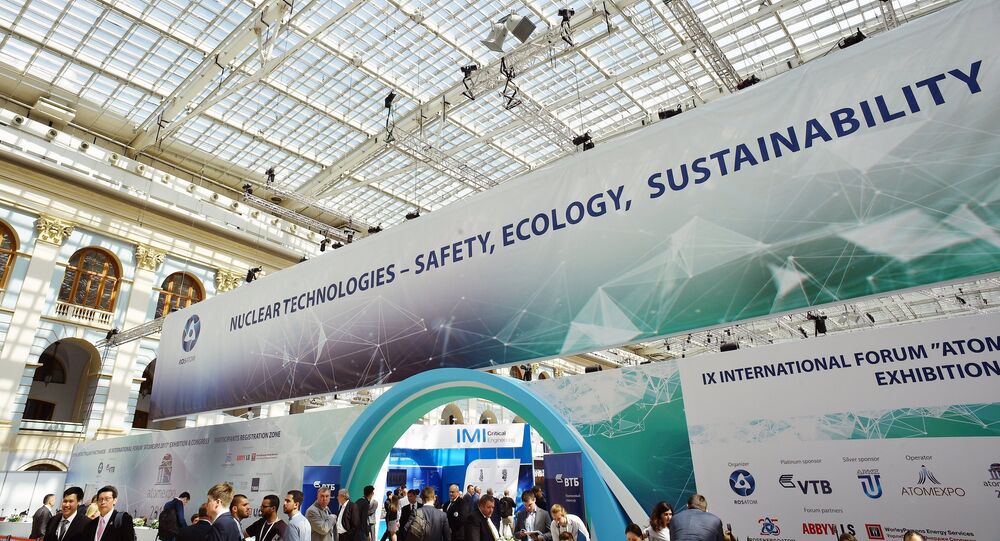 The Ninth International ATOMEXPO 2017 Forum was held on June 19-21 at the Gostiny Dvor exhibition center in Moscow.

The ATOMEXPO International Forum was organized by Russia’s State Nuclear Energy Corporation Rosatom.
This year, more than 6,500 delegates and guests from 65 countries around the world participated in the event; 33 countries were represented by official government delegations. The number of companies that participated in the forum has also increased: the representatives of 653 companies took part in the exhibition.

© Sputnik / Ruslan Krivobok
Future of Nuclear Energy to be Discussed During ATOMEXPO Forum in Moscow
One of the main events of the business program ATOMEXPO 2017 was the plenary session named "The Atom — The basis of the carbonless energy of the future."

Sergey Kiriyenko, the deputy head of Russia's Presidential Administration delivered the opening speech. He read the Russian President's address to the forum participants.

Kiriyenko reminded attendees during the speech that according to the Paris Climate Agreement of 2015, clean energy use throughout world should be increased over 30 years, to account for 80 percent of energy consumption rather than 30 percent. "This is the biggest task that the world nuclear industry faces," Kiriyenko said.

"To accelerate the global development of nuclear energy, major players in the nuclear market need to join forces and work together to increase the demand for nuclear technology," Alexey Likhachev, the head of Rosatom, said during the session.

Discussions on the main topic of the forum and other relevant topics related to the present and future of nuclear energy continued at the round tables. More than 200 experts participated in 16 round tables during the three days of ATOMEXPO.

The two-day event "A digital future: the next step in the development of nuclear technology" aroused great interest among forum participants. The event was devoted to the practice of introducing digital technology in industry and the state's needs for digitalization. The participants discussed European practices and standards from the point of view of the global movement on the digitalization of the economy, examined the prospects for the development of public administration in the digital economy, as well as the needs to be developed and improved.

This year, 120 companies dealing with nuclear industry and related industries took part in the exhibition program of the forum this year. The Russian nuclear industry was represented by more than 40 enterprises.

A record number of agreements (over 50 documents) both interstate, commercial and other documents, was signed during the framework of ATOMEXPO-2017.