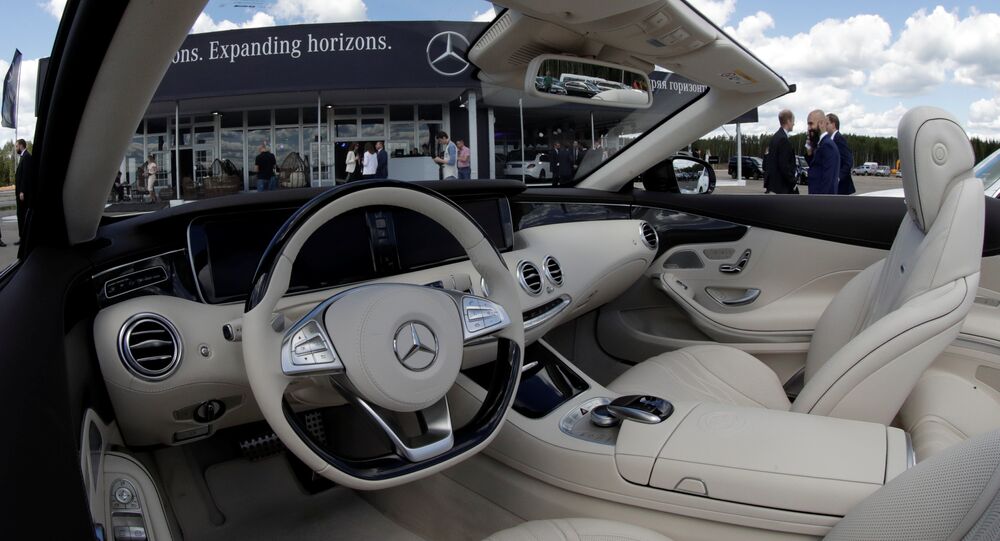 Daimler AG is localizing production of Mercedes-Benz SUVs and sedans thanks to strong sales and the growth potential of the Russian market.

© Sputnik / Mikhail Voskresenskiy
European Commission Clears Russia-UK-Germany LNG Services Joint Venture
On Tuesday, the car manufacturer Daimler began construction of a new factory in in the Moscow region. The firm is investing over €250 million ($279 million) in the factory, which will create over 1,000 jobs.

The new factory is located in Esipovo Industrial Park, around 40km northwest of the Russian capital. It will manufacture sport utility vehicles (SUV) and e-class sedans, the first of which will leave the assembly line in 2019.

Daimler has chosen Moscow as a center for its global expansion because of Russia's strategic importance, potential for market growth and the popularity of Mercedes-Benz in the Russian premium car market.

Last year, Mercedes-Benz was the strongest-selling premium automobile brand in Russia, for the fourth year running. The best-selling models were the E-Class sedan and the SUVs.

"Russia has been one of our most important global markets for decades. We are the number one brand in the Russian premium segment. Now, we are expanding our global production network with a new factory," Markus Schaefer, Member of the Divisional Board of Mercedes-Benz Cars, Production and Supply Chain Management, told Sputnik Deutschland.

"The sanctions don't disturb us; we are working here within the legal framework of what is possible. We believe that the Russian market will continue to develop and that the factory and its products have a successful future here in Russia."

In preparation for the expansion, last year Daimler opened a new after-sales service center 20km from the site of the new factory.

"The local production brings us closer to our customers in Russia and at the same time strengthens the global competitiveness of Mercedes-Benz Cars," Schaefer said.

Axel Bense is CEO of Mercedes-Benz Manufacturing RUS (MBMR), the company which manages production at the new site. He told Sputnik that the company decided to go ahead with the plans since the worst of Russia's economic recession has passed.

"We have had this idea for a long time, but then the crisis started. Now, the time has come to build the plant together with our Russian partners. We have already begun construction work at the site and the first supports will be up in four to six seeks. According to the plan, all the buildings should be built by the end of the year," Bense said.

Daimler joins several German companies, including the agricultural machinery manufacturer Claas and the consumer goods company Henkel, which have localized production in Russia since the government introduced its import substitution plan in September 2014.

© Sputnik / Iliya Pitalev
Pedal to the Metal: Russian Car Sales Jump by Double Digits for Month of May
The plan includes several measures to stimulate production in Russia, such as the Special Investment Contract. This offers tax breaks and legal guarantees for Russian companies who want to make products which aren't already made in Russia, and for foreign manufacturers who are going to localize production in Russia.

The fall in the value of the ruble since 2014 has also made Russian production more competitive. In 2015, Volkswagen and Hyundai boosted production in their Russian factories of vehicles for export markets in the Middle East and the Far East, as a consequence of the weak ruble.

According to figures from the Russian analytical agency AVTOSTAT, the import substitution program has already led to a greater proportion of domestically-produced cars sold on the Russian market. In the first four months of 2017, 60 percent of cars sold in Russia were manufactured domestically, up from 33 percent in 2010.

Oops! I Did it Again: Young Woman Slams Mercedes Into 11 Parked Cars

Mercedes-Benz to Recall Over 300,000 Cars in US Because of Fire Hazard