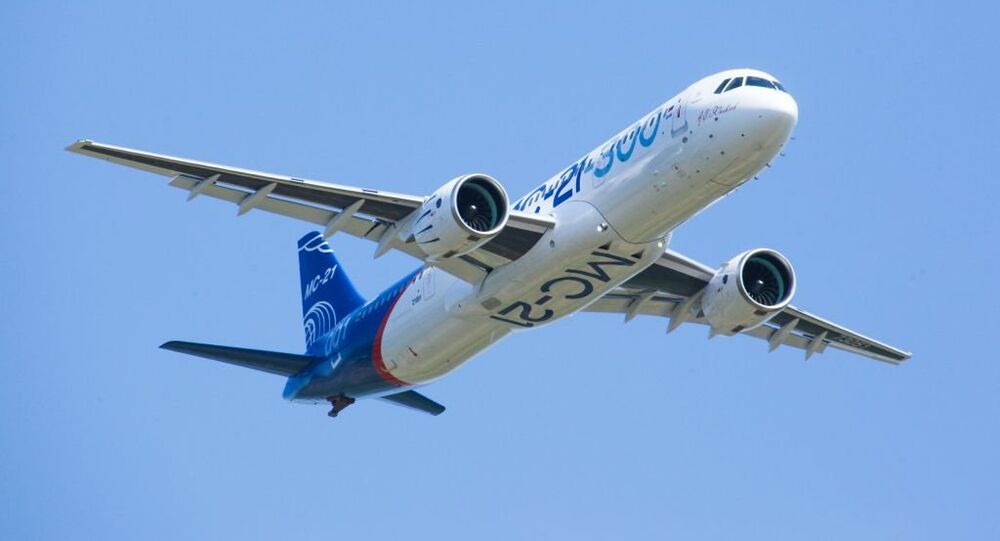 The new Russian passenger plane MC-21-300 has successfully completed a flight with its landing gear retracted, in line with the company flight test program.

"Today we made an important step forward: the MC-21 plane performed a flight with the landing gear retraction and extension. This allows us to proceed with new and more complex modes of flight testing," he said.

Demchenko is head of the Irkut Corporation delegation at the 2017 Paris International Air Show, which kicked off at Le Bourget on June 19.

The delegation's main task is to negotiate with potential buyers of the MC-21 as well as engage in talks with partners within this program.

MC-21 takes to the skies for a second set of tests, this time for runway performance.https://t.co/2JbLqSPccc pic.twitter.com/BqAndKYgHp

In an interview with Sputnik, Viktor Pryadka, head of the Avintel Aviation Technologies Alliance, specifically focused on the plane's distinctive features.

"The MC-21 is a direct competitor to all modifications of the Boeing-737 family and the Airbus A-320 models. The MC-21 is more comfortable due to the fact that its fuselage has a larger diameter, which in turn allows for wider seats. This is something that will be an advantage in terms of comfort," Pryadka said.

According to him, the MC-21 incorporates the latest in the field of airframe, engine and avionics systems technology in its design, including a composite wing design, which improves fuel efficiency.

"Additionally, the aircraft will be powered by foreign or Russian-made engines, in line with the customer's demands. This is also a competitive advantage," Pryadka added.

© Wikipedia
Russia Showcases MC-21 Mid-Range Airliner for 1st Time in Brazil
He said that the MC-21 will undergo a series of additional tests before it is mass produced.

"It will take up to three years to complete the certification test program pertaining to the MC-21. This will add significantly to the plane's competitiveness," he pointed out.

"During these tests, some adjustments to the aircraft's design will be made and characteristics declared by the developer during the test flights will be confirmed," Pryadko concluded.