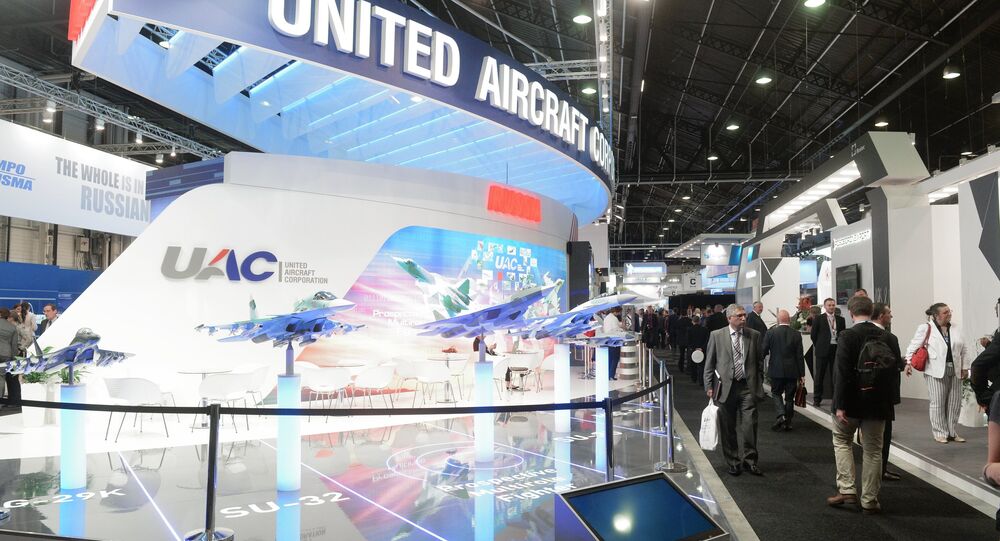 Russia will roll out an impressive array of civilian and military aircraft during this year’s Le Bourget international air show that kicked off outside Paris on Monday.

© AFP 2020 / PIERRE VERDY
Paris Air Show 2017 Kicks Off at Le Bourget
Aircraft makers from almost 50 countries will be showcasing more than 2,000 planes, helicopters, engines and drones during the high-profile air show, scheduled to run until June 25.

Russia is represented by Rosoboronexport, the United Aircraft Corporation, Russian Helicopters, Roscosmos, the United Engine Corporation and about a dozen other aircraft and aerospace firms.

The UAC’s display will also feature a cockpit simulator for Russia’s all-new MC-21 jetliner, which conducted its maiden flight in May.

The Russian Helicopters Corporation will be showcasing a production model of the Ansat light multirole rotorcraft the company plans to sell in Europe.

The United Engine Corporation has brought to the Le Bourget show its latest PD-14 turbofan, designed for the MC-21, and the SaM146 engine for the SuperJet 100 it has developed jointly with the French.

The UEC also plans to present the RD-14 to potential foreign buyers.

Russian air defense is presented by the Antei-2500 (S-300) and, Buk-M2E missile systems, and Pantsir-S1 missile and anti-aircraft artillery.

Visitors at the United Aircraft Corporation pavilion will have a chance to see scaled-down versions of the PMI, Su-32, MiG-29K, MiG-35, Su-30SM and Yak-152 combat and trainer aircraft.

Russian Helicopters’ CEO Andrei Boginsky told reporters on Monday that the prototype of their PSV high-speed helicopter, based on the M-24 helicopter gunship, was now able to speed at up to 400 kilometers an hour.

“We have already reached the speed of 400 kph with very acceptable levels of vibration and airframe load. We are going to use the expertise obtained during the tests on our flying lab in the upgrade of existing and the development of new helicopters,” Boginsky said.

He added that high-speed helicopters were now being developed also abroad, including in the United States where a Sikorsky helicopter is now able to fly at 450 kilometers an hour.

© Sputnik / Alexey Kudenko
Everything You Ever Wanted to Know About Russia's All-New MC-21 Jetliner
“However, [the Sikorsky] weighs around 3.6 tons, which means that it is much lighter than our flying lab. Theirs is a different —class and different —purpose helicopter with a rather limited payload,” Boginsky added.

The Paris Air Show at Le Bourget Airport is a world-class event that happens once every two years. The Soviet Union made its debut there in 1936 showcasing its giant ANT-35 airliner.

The USSR and then Russia have regularly participated in the Paris Air Show since 1957.