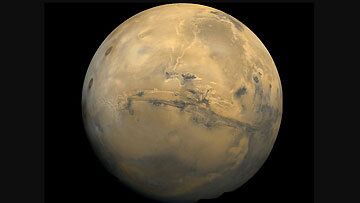 The first among a series of psychological experiments designed to look into problems that might arise in a mixed crew on its way to Mars will start at the Institute of Biomedical Problems of the Russian Academy of Science.

© Photo : Mars One - Human Settlement of Mars
Reaching for the Red Planet: Russia's Mars One Hopeful Can't Wait for Lift-Off
MOSCOW (Sputnik) — The first among a series of psychological experiments designed to look into problems that might arise in a mixed crew on its way to Mars will start in November at the Institute of Biomedical Problems (IBMP) of the Russian Academy of Science, a statement released by the Institute said Thursday.

"The IBMP will conduct the SIRIUS (Scientific International Research In Unique Terrestrial Station) project, which will include modeling conditions of long-term interplanetary flight of a mixed crew in completely autonomous conditions … Within the project, a series of experiments with duration from 14 days to a year is set to be conducted. The first 14-day long experiment is planned to be carried out in November 2017," the statement reads.

The experiment should demonstrate how a crew of six people from different countries, including two women, would interact among themselves while being almost completely stripped of contact with the Earth. Leadership dynamics, inter-gender interaction, personal space issues, biochemistry and immune system issues are to be studied during the test.

"To compensate the ‘Earth separation’ phenomenon, new promising psychological techniques will be tested (particularly those that utilize greenhouses and virtual systems). The optimum zoning of the future station will be determined as well, with consideration of not only technical limits but also the crew’s comfort, allowing to minimize psychic and emotional strain among the crew during the Mars mission," the institute explains.

Moreover, the scientists plan to understand whether the crew would be able to independently draw up a plan of actions and to adapt it to changing external conditions, as well as to study how efficiently they would use the potential of their spaceship and equipment.

The project should last from 2017 to 2022. In 2018, the IBMP plans to conduct two experiments, one lasting four months and another that should be two or three weeks long. An eight-month session should be carried out in 2019, and a year-long imitation is planned sometime in 2020-2021.

Russia Can Build Base for Future Mars Missions Near Vostochny Cosmodrome