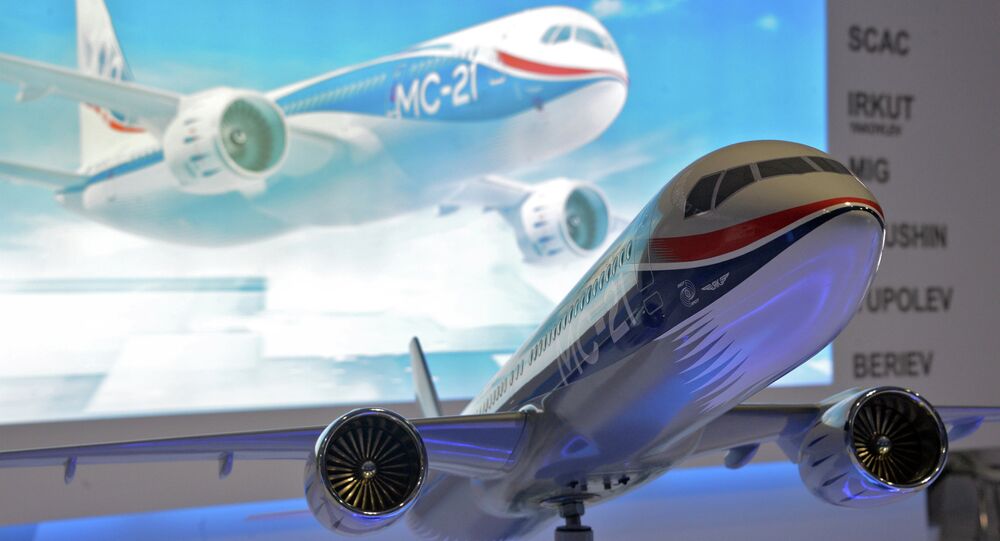 The MC-21 jetliner, Russia’s answer to the Boeing-737 and the Airbus A-320, which made its maiden flight in late May, brings together the very latest in the field of aircraft and engine design.

Short- and medium-haul airliners with passenger capacity of between 130 and 220 and a range of up to 6,000 kilometers (3,728 miles) are the most mass-produced type of passenger aircraft around.

A representative of the Irkut press service told Sputnik that even though the MC-21 is a single-aisle plane, it is actually a wide-bodied design with six seats on each side giving it the most spacious cabin to be found on the planes of its class.

Even better, the MC-21 is fully compatible with the existing 4C ICAO- and III FAA-approved runways currently used by Boeing and Airbus airliners.

The MC-21 is designed to be faster, more efficient and less expensive than its Western counterparts, incorporating the latest in the field of airframe, engine and avionics systems technology in its design, including a composite wing design, which improves fuel efficiency.

Irkut was the first to employ composite materials on narrow-bodied planes repeating the breakthrough solutions Boeing and Airbus earlier used with their jumbo-class aircraft.

All these innovative solutions will make the MC-21s 15 percent cheaper in operation compared with their foreign analogs.

“Amazing! The plane is so easy to fly that you just don’t need to get used to it!” one of its two test pilots, Roman Taskayev, enthused after the plane had made a perfect landing.

When asked whether Irkut planned to open MC-21 assembly plants and service centers in the BRICS countries or elsewhere in the world, a representative of the press service said that they want to sell the plane abroad, including to Brazil.

With Latin American air carriers expected to need about 2,000 medium-range airliners of the MC-21 class before 2035, Irkut expects to supply an estimated 150 MC-21s to the region.