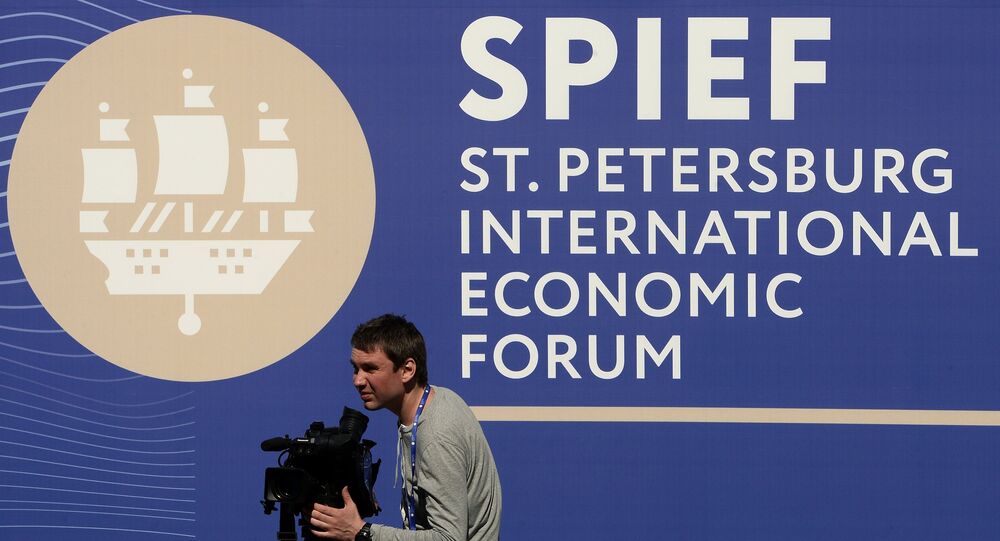 The 21st annual St. Petersburg International Economic Forum (SPIEF) will kick off on June 1 and last for three days. This year’s event will be focused on bringing balance to the global economy.

More than 200 leading experts from Russia, Europe, Asia, the US, Canada and Latin America have put their heads together to draw up the program of the high-profile economic gathering.

During the three days of sessions and roundtables the participants will focus on global economic dynamics, Russia’s economic roadmap, new technologies, human resources as a key element of economic and social growth, and on future development.

© Sputnik / Alexandr Piragis
SPIEF to Show What Russian Far East Has to Offer for Cooperation With Asia Pacific
The St. Petersburg forum will traditionally host a series of sessions of BRICS and Business 20 on trade and investments, a summit of energy company CEOs, business dialogue workshops, Eurasian Economic Community – India and IT business lunches.

A session of the World Festival of Youth and Students will for the first time be held on the sidelines of the St. Petersburg forum in the form of panel sessions, roundtable meetings, business lunches and televised debates.

President Vladimir Putin will traditionally address the participants during a plenary meeting.

According to the forum’s organizers, there will be more people taking part in this year’s SPIEF forum than in 2016 as more than 12,000 participants from over 130 countries, including 230 foreign company CEOs, 650 Russian business executives and the heads of 76 Russian regions are expected to take part.

The St. Petersburg International Economic Forum is a unique event in the world of business and economics. It provides a  platform for global leaders to engage with their peers in finding solutions to the most pressing issues affecting the world today.

SPIEF has been held since 1997, and since 2006, it has been held under the auspices of the President of the Russian Federation, who has also attended each event.

© Sputnik / Alexei Danichev
Made In Russia Brand Deal to Be Promoted at SPIEF - PR Chief
Over the past 20 years, the forum has become a leading global platform for representatives of the business community to meet and discuss the key economic issues facing Russia, emerging markets, and the world as a whole.

The St. Petersburg International Economic Forum 2016 was attended by over 12,000 participants from 133 countries, including heads of state and government from emerging economies, heads of major corporations, and the world’s leading experts in the fields of science, the media, and civil society.