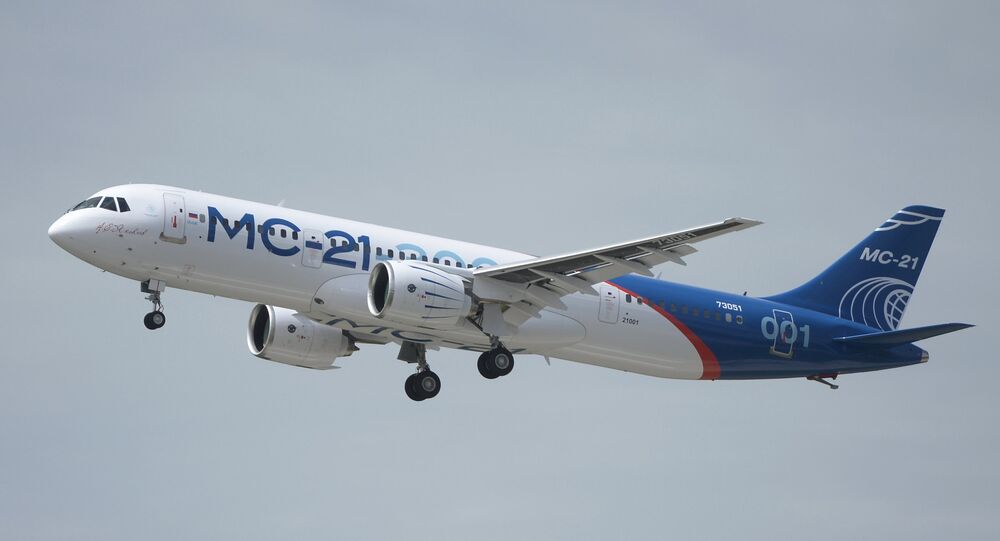 Over the weekend, the Irkut MC-21, a prospective new jet airliner that's expected to be Russia's answer to the Boeing-737 and the Airbus A-320, conducted its maiden flight.

On Monday, the minister finally revealed the real reason for the number '21' in the MC-21's name.

In a post on his official Facebook page, Rogozin wrote that his aircraft designer friend has told him that "the MC-21 is 21% superior to its competitors in every respect – fuel consumption, maintenance requirements, comfort, noise isolation, and weight. And of course, buyers will earn 21% more by flying these aircraft, compared to the catalogue prices of Boeing and Airbus planes."

"There you have it. Now I understand where our mainline aircraft [Russian 'Magistralny Samolet' – abbreviated as MS or MC] got its lucky number from," Rogozin quipped.

© Sputnik / IRKUT Corporation/Marina Lisceva
Russia to Offer Integrated Contracts for MC-21 Plane - Deputy Prime Minister
Engineers have confirmed that the MC-21's maiden flight Sunday took place as expected, with all the plane's onboard systems working flawlessly. The twin-engine short- and mid-range airliner is expected to have at least three variants, with passenger capacity ranging between 150-212 persons.

The MC-21 is designed to be faster, more efficient, and less expensive than its Western counterparts, incorporating the latest in the field of airframe, engine and avionics systems technology in its design. For example, the plane features a composite wing-design, which improves fuel efficiency, and will eventually be fitted with new Russian-made PD-14 engines, which meet and exceed global safety, noise, and fuel efficiency standards. The aircraft is also designed to have a superior cruising speed, and a price tag tens of millions of dollars less than those of its Boeing and Airbus competitors.

Last week, Rogozin said that there are already 185 orders for the MC-21, with dozens more expected as interest rises amid flight testing.

On Monday, Russian Minister of Industry and Trade Denis Manturov said that the MC-21 should receive its airworthiness certificate in 2019. Eight planes, including three for flight testing, are currently being assembled at the Irkutsk Aviation Plant. Russia hopes to produce up to 1,000 of the planes for the medium-haul passenger liner market, which is by far the most capacious segment of the global aviation market, by 2037.

© Sputnik / Sergey Mamontov
'Great Export Potential': Russia's MC-21 Passenger Jet Conducts Maiden Flight (VIDEO)
Work on the MC-21 first began in the late 2000s, and intensified in 2014 after the downturn in relations with Western countries. Moscow has taken a number of steps to allow Russian aviation companies to win back the commercial passenger aircraft market, both domestically and abroad.

On Tuesday, RIA Novosti reported that the Russian government had instructed its representatives in the boards of directors of state companies to vote in favor of the purchase or lease of only Russian-made aircraft.