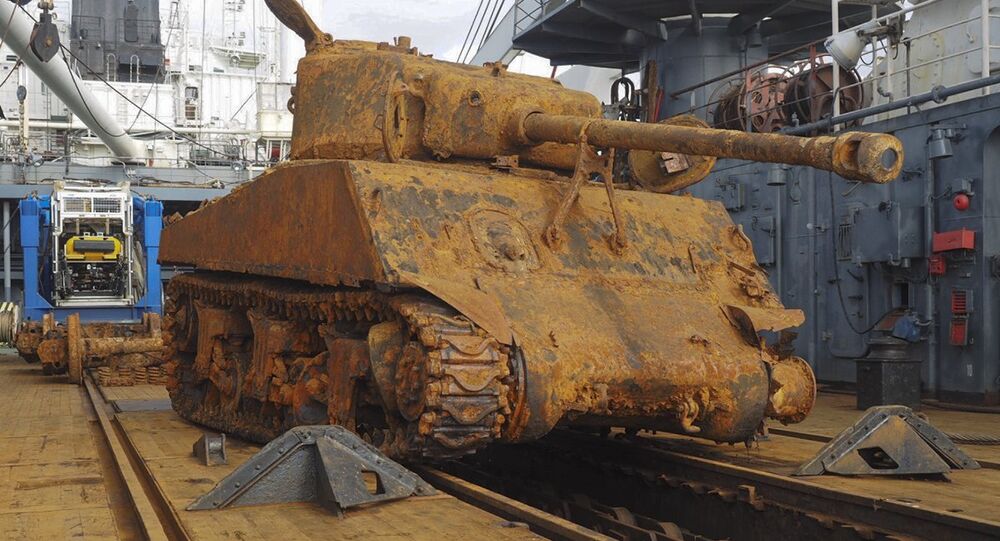 Russia's Northern Fleet divers have recovered a US Sherman tank with a 76-mm gun from the transport ship Thomas Donaldson, sunk by Nazi sub in Barents Sea in 1945, Russia's Defense Ministry reported on Saturday. This hardware was supplied to the Soviet Union during the Second World War under the Lend-Lease agreement with the US and allies.

Russia's Defense Ministry has posted photos of the US Sherman tank it recovered from the transport ship USS Thomas Donaldson, torpedoed by a Nazi sub in the Barents Sea in 1945.

The M4 Sherman tank, so-named by the British after the American Civil War General William Tecumseh Sherman, was supplied to the Soviet Union under the Lend-Lease program in the years of the Second World War. The tank was officially called the Medium Tank M4.

​Much equipment, armored vehicles, warships and warplanes, tanks, food, oil and other materials were delivered to the northern ports of the Soviet Union, primarily Arkhangelsk and Murmansk, by the so-called Arctic convoys to aid Russia’s fight against Nazi Germany.

Although there were two gaps with no sailings between July and September 1942, and March and November 1943, there were 78 convoys between August 1941 and May 1945, sailing via several seas of the Atlantic and Arctic oceans.

About 1,400 merchant ships delivered essential supplies to the Soviet Union. Of these, 85 merchant vessels and 16 Royal Navy warships (two cruisers, six destroyers and another eight escort ships) were lost.

​The USS Thomas Donaldson was part of the JW-65 Arctic convoy when it was torpedoed by Nazi U-Boat U968 near the shore of then-Soviet, now Russian Kildin Island in the Barents Sea, off the Russian shore and about 120 km from Norway, on March 20, 1945.

​A torpedo then hit the engine room, killing one officer and two crewmen who were on watch below and destroying the engines.

The site of the wreckage was discovered 12 years ago. The vessel was found lying 55 meters deep in Russian territorial waters near Kildin Island, allowing access to divers in light equipment.

It was also planned use the next generation remotely operated submersibles Pantera Plus and Tiger, capable of operating to depths of up to 1,000 meters. They are equipped with mechanical manipulators that can operate cable cutters and a circular saw for cutting underwater steel structures up to 90 mm thick.

​In addition to its tanks, the Thomas Donaldson was carrying 7,679 tons of general cargo including 6,000 tons of ammunition, foodstuffs and other vehicles.

​In the first year of their surveying work, the divers have already been able to retrieve several road rollers, a 100-ton freight locomotive, two US Sherman tanks, an M2 90mm anti-aircraft gun, a 102mm gun, an anti-aircraft machinegun and some small items — artillery shell casings and projectiles.

​All this military hardware was given to The Military Historical Museum of Artillery, Engineers and Signal Corps, also known simply as the Artillery Museum, in Saint Petersburg, Northern Maritime Museum in Archangelsk and The Museum of the Air Forces of the Northern Fleet.