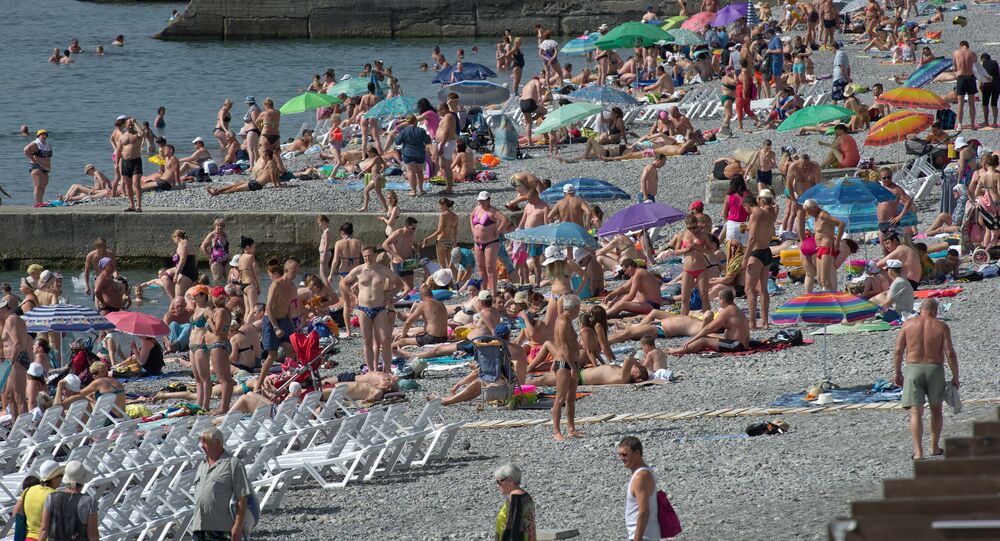 People from 64 countries visited Crimea to receive medical treatment despite the sanctions, according to head of the Crimean Parliament's Committee on Health-Resort Complex and Tourism Alexey Chernyak.

© Sputnik / Sergey Malgavko
Crimea Expects Growth of Tourist Flow From Ukraine in 2017 - Minister of Tourism
YALTA (Russia) (Sputnik) – Despite Western sanctions against Crimea, health tourists hailing from 64 countries across the globe visited the peninsula in 2016, head of the Crimean Parliament's Committee on Health-Resort Complex and Tourism Alexey Chernyak said on Friday.

"Last year, people from 64 countries visited Crimea to receive medical treatment despite the sanctions. That is the official figure of the [Russian] Federal Border Service. These [countries] are not only Kazakhstan and Ukraine but also the United States, the United Kingdom and Israel," Chernyak said.

He pointed out that Crimea's main attractions were its health resorts and that the peninsula would not compete with Turkey and Egypt in terms of coastal tourism.

"The main goal that the government set for us is to attract up to 10 million tourists per year," the lawmaker said, adding that Crimea was receiving great investments.

© Sputnik / Sergey Malgavko
Germany Sees Growing Demand in Travel Tours to Crimea - Die Linke Chairman
In 2016, a total 5.6 million people visited the Crimean peninsula that rejoined Russia after a referendum, according to Russia's TurStat agency. The plebiscite's result was not recognized by the international community as well as Ukraine that considers the peninsula as an occupied territory. Moscow views referendum in line with the UN Charter and perceives the issue of Crimea's territorial belonging as historically closed.
...
Reddit
Google+
Blogger
Pinterest
StumbleUpon
Telegram
WhatsApp
143