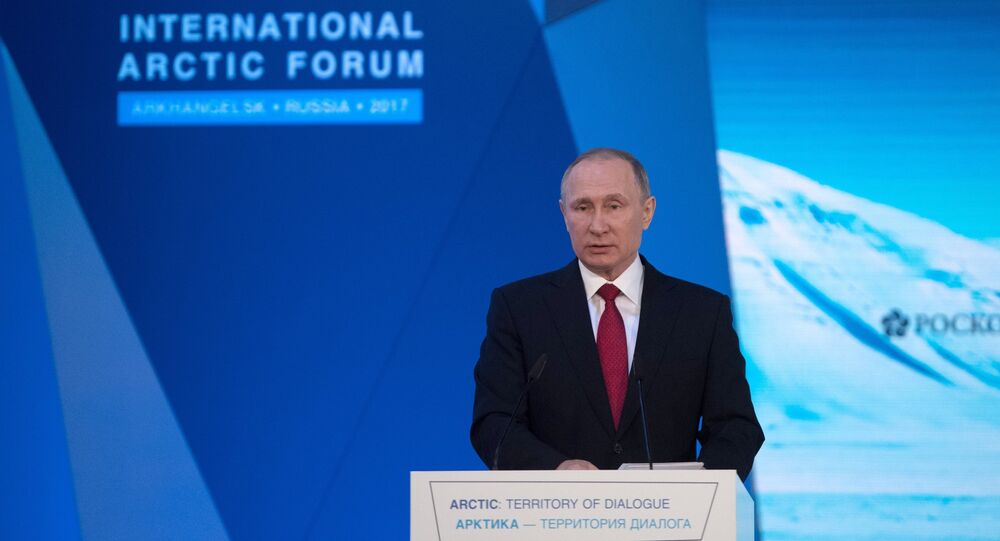 Finland Takes Over Arctic Council Chair, With All Eyes on Russia

Today the Arctic Council is meeting in Alaska and the United States is preparing to hand over the reins to Finland. All eyes are on Russia, which is investing US$180 billion in the Arctic region, and at an event in London the Finns have promised to broker peace and prosperity in the Far North.

"There will be no Cold War in the Arctic," Pekka Pokela told an event at the Finnish Ambassador to London's residence which marked Helsinki's assumption of the role of chair of the Arctic Council.

His optimism may have been a surprise to some who have witnessed growing tension in the region.

Around 200 people protested Wednesday, May 10 against climate change outside the conference center where the Arctic Council will meet Thursday, May 11.

The United States, which has chaired the eight-member group for the past two years, is handing over the chair to Finland after a ministerial level meeting in Fairbanks, Alaska.

Russia's Foreign Minister Sergei Lavrov is attending the meeting amid growing tensions in the Arctic Circle.

"Russia has special interests in the Arctic region, where virtually all aspects of its national security are concentrated.

"Major international players are now focusing on the Arctic more actively. This leads to rivalry and clashes of interests and ambitions of various countries, including those from beyond the Arctic region," the Russian Foreign Ministry said on its website.

Around US$400 billion is being invested in the Arctic region, with the lion's share of that coming from Russia.

According to a report by the Arctic Monitoring and Assessment Program, findings indicate that the Arctic Ocean could be largely free of sea ice in summer in only two decades.

Already shipping companies are seeing the attraction of using the Northern Sea Route — sometimes called the North-East Passage — which allows vessels to cut two weeks off the journey between Europe and Asia.

There is massive potential for "blue growth" in the Arctic.

Pokela, a business consultant who was commissioned by the British government to explore opportunities for Britain in the Arctic, said Russia had opened six new military bases in the Arctic region, was opening up rivers like the Ob and the Yenisei to navigation and was investing heavily in energy and mining in Siberia and the Arctic.

He also pointed out they were planning a floating nuclear power plant at Pevek, which is due to come into operation next year.

Later Pokela told Sputnik why he was so optimistic about relations between Russia and other countries in the Arctic:

"At the Arctic Economic Council's recent meeting, Mr. Lavrov said he welcomed and supported it. It's positive to have a dialogue on Arctic initiatives at the moment. It's warmer there than in other parts of the world. For example, there are no practical tensions between Norway and Russia over oil and gas boundaries. That has been agreed a few years ago."

But he said the sanctions which had been imposed on Russia were preventing economic and scientific co-operation between Arctic countries.

© Sputnik / Anton Denisov
Rosneft, ExxonMobil Discover Oil in Kara Sea Drilling: Rosneft
In 2014, Rosneft and ExxonMobil jointly discovered oil in the Kara Sea, but the American company was forced to pull out after sanctions were introduced and Pokela said the Trump administration had recently refused ExxonMobil's request to reconsider.

In November, the Paris Agreement on climate change came into force.

The deal, ratified by 111 countries, aims to limit global average temperatures to less than 2 degrees Celsius above pre-industrial level.

President Trump has threatened to withdraw the US from the agreement and this week he received a call from France's new President, Emmanuel Macron, in which they discussed climate change.

At the Arctic Forum in Arkhangelsk in March, Putin said Russia would respect the Paris Agreement just as it had abided by the Kyoto protocols. He said, after a visit to the Franz Josef Land archipelago: "Our scientists told me they have been observing the constant melting of snows and glaciers there which the Finnish president (Sauli Niinisto) mentioned and this a sign that climate change is bringing more favorable conditions to develop the economic potential of this region."

At the same meeting Putin said: "Russia believes there is no potential for conflicts in the Arctic region."

Mr. Harri Maki-Reinikka, Finland's Ambassador for Northern Policies, told Sputnik that whatever the cause of climate change there was a need for mutual co-operation in the Arctic and he cited the danger from black carbon, or soot, from the flaring of waste natural gas.

US to Transfer Arctic Council Chairmanship to Finland at Ministerial Meeting