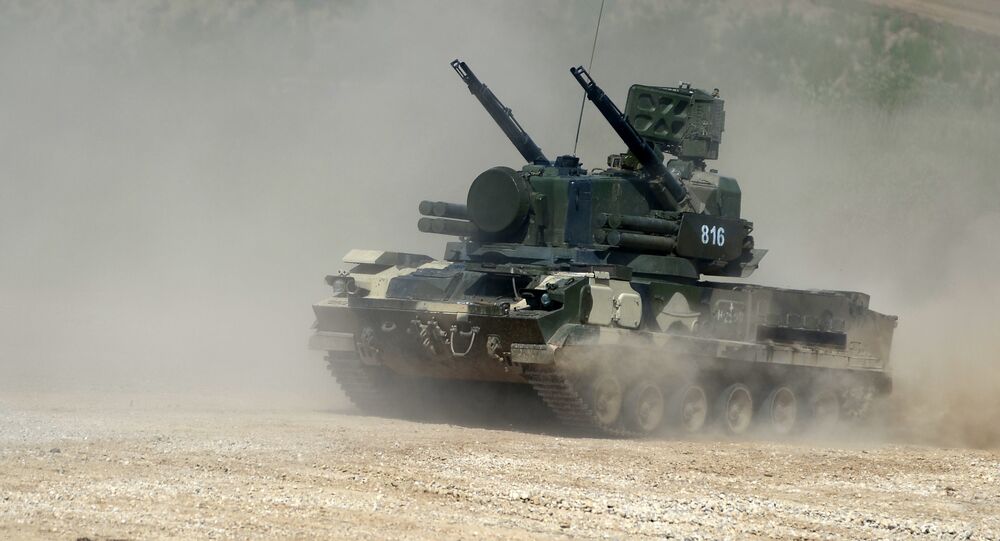 The Tunguska anti-aircraft missile and gun system currently in service with the Russian Armed Forces, is one of the fastest-firing weapons around. Its dual 30 mm cannons boast a combined rate of fire of 5,000 rounds per minute or an impressive 85 each second.

The Tunguska M-1 tracked self-propelled antiaircraft weapon armed with a surface-to-air gun and missile system, is designed to provide day and night and all-weather protection for infantry and tank regiments against low-flying aircraft, helicopters, and cruise missiles.

Moreover, it can do all this while on the move!

The Tunguska’s dual 2A38 30 mm cannons have a muzzle velocity of 960 meters per second. Bursts of between 83 and 250 rounds are fired depending on the target type, with an engagement range between 0.2 and 4.0 kilometers and to an altitude of about 3 kilometers.

© Sputnik / Alexei Danichev
S-400 Air Defense System Enters Combat Duty in Russia's Northwest – Navy
The Tunguska can fire its cannons in two primary modes of operation, radar and optical. The height of defeat for its guns is up to 2 kilometers and for missiles – 3.5 kilometers.

The onboard radar can spot targets up to 25 kilometers away.

Even though it was primarily designed as an anti-aircraft weapon, the Tunguska is equally deadly against ground targets with its lightning-fire dual cannons leaving the enemy no chance of survival.

The Tunguska uses the improved 9M311-M1 two-stage guided missile, which has an increased range of up to 10 kilometers and an altitude of maximum 3.5 kilometers and a speed of 900 meters a second.

Guidance is performed by the target tracking radar, it constantly relays target range, elevation and bearing to the fire-control computer, and on the basis of this data the computer generates the laying commands for the guns or the trajectory corrections for the missiles

The 9М311 can also shoot down low-flying targets. Military experts say that with Tunguska systems in place during the recent US cruise missile attack in Syria, the airbase would have remained intact.

All this impressive arsenal is mounted on a 2S6 combat vehicle with six road wheels with hydro-pneumatic suspension on each side.

It has a cruising range of 500 kilometers, a maximum speed of 65 kilometers per hour and can function at a relative humidity of 98 per cent at temperatures of 50 degrees below zero to 65 degrees above, making it an ideal choice for countries like India.

© Sputnik / Mikhail Fomichev
Russian Pantsir Systems 'the Most Efficient Means' to Beat US-Made Tomahawks
The 2S6 combat vehicle is able to climb up to 35 degrees, cross slopes of 25 degrees, handle 2-meter-dide ditches and ford water barriers of up to 1 meter deep.

The vehicle is also protected against the effects of nuclear, biological and chemical weapons.

A mobile reconnaissance and control center coordinates the activities of several Tunguska M-1 systems providing their crews with the coordinates of low-flying jet-engine targets, such as cruise missiles. The moment cruise missiles enter the system’s active zone of defense, they are destroyed by cannon fire.

Even though the Tunguska has been around for decades now, it still remains a formidable element of Russian air defense. And with pretty good reason too, given its ability to engage aerial targets while on the move and across very rugged terrain to boot.

Indeed, moving at 60 kilometers an hour away from hard roads while simultaneously keeping the enemy in its crosshairs is something no other system of this kind can boast.