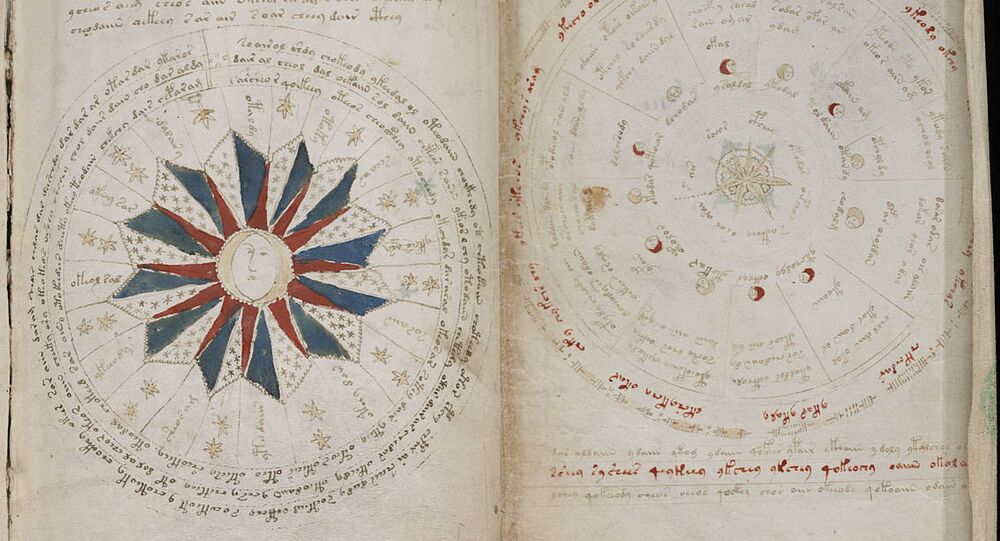 Experts at the Institute of Applied Mathematics in Moscow have determined that the so-called Voynich Manuscript, a 15th century book written in a mysterious coded language that no one has ever managed to crack, was actually written in two languages, except for the vowels.

© AFP 2021 / CESAR MANSO
A Book No One Can Read: Mystery of 600-Year-Old Voynich Manuscript
The manuscript, currently kept at Yale University’s Beinecke Rare Book & Manuscript Library, is named after Polish book dealer Wilfrid Voynich, the husband of the famous author Ethel Lilian Voynich, who bought it in 1912 in Italy.

The illustrated codex was radiocarbon-dated to medieval Italy between 1404 and 1438.

Researchers have been trying to decipher its bizarre script for 600 years, but to no avail.

In the past, CIA and NSA experts and even occultists had tried and failed to decipher the manuscript. Cryptologist Gordon Rugg from Keele University in the UK, who has spent more than a decade studying the manuscript, said that it might be a fake because it makes no sense.

In their effort to find a clue to the mystery, a team of mathematicians at the Keldysh Institute of Applied Mathematics in Moscow initially evacuated the majority of the vowels and spaces, transforming the codex into what looked like an extremely long Russian name.

They then compared the vowel-less, space-less string of characters to Indo-European languages such as the Slavic subgroup, Germanic, Romance, Greek, Bac and Latin.

They took up the Ural family of languages and their Finno-Ugric branch and also looked at artificial languages such as Esperanto, Interlingua and Klingon.

© Sputnik / Maxim Bogodvid
Ancient Manuscript Mystery: Rare Korans Discovered, Returned to Iran
Analyzing the structure of the encoded text they found out that the parts of the text thought to be associated with the pictures – namely “Botanical part,” “Female bodies,” “Astrology” and “Mortar” – are all mixed up.

A statistical analysis of the obtained data showed that the text was 60 percent English and German and 40 percent  Spanish, Italian and maybe a bit of Latin.

“Unfortunately, there is no way we can restore the entire text without vowels as possible options can be too many to understand its meaning. Judging from the illustrations, the author explains which time of year is best for planting poppy to obtain opium,” the research’s co-author, Yuri Orlov, told Sputnik.

“We had a chance to figure out whether we can determine a particular language with the help of mathematical models. The next step will be to figure out the mixed languages used in this text,” he added.