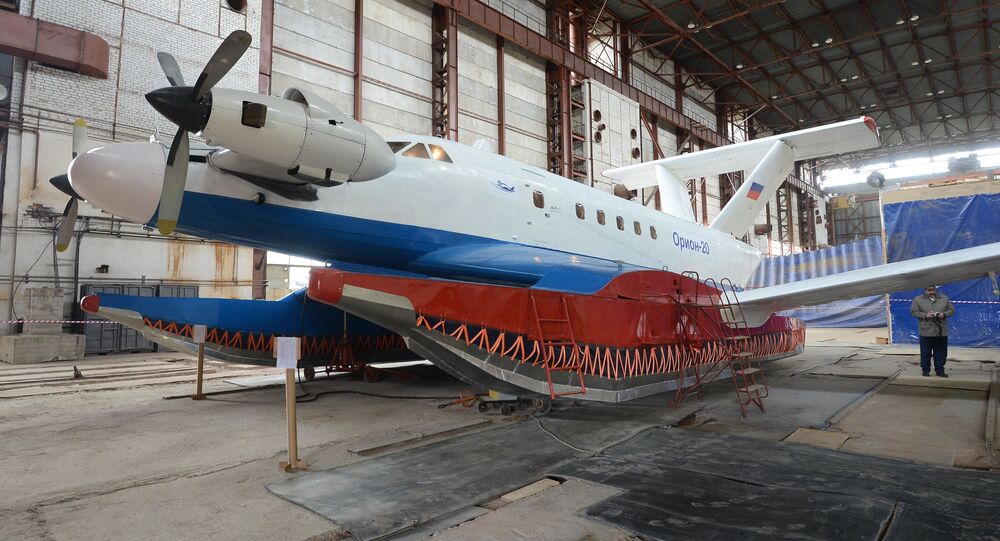 Russian Ekranoplans to Fly in Iran

Iran wants to buy a number of upgraded Russian Orion-20 amphibious planes, which can land and take off on water and ice by making use of ground effect, the extra lift of large wings when they’re used in proximity to the water’s surface.

Youtube / МЧС России
Be-200 Amphibious Plane Shines During Firefighting Drills in Crimea
The Orion-20 has maximum speed of 180 km/h and can haul one ton of cargo, plus 12 passengers.

“In 2011 we signed a contract with Iran’s Bonyan Danesh Shargh Соmpany for the delivery of a number of Orion-12 ekranoplanes. Three such aircraft have already been supplied and we are now in talks for the supply of our experimental Orion-20s,” Yuri Varakosov, Russia’s chief designer of ekranoplans, told Sputnik.

The international sanctions which were imposed on Iran have also been a factor in the delayed supply of the initial batch of Orion-12 amphibious planes to Iran.

With most of the sanctions now lifted, Russia can resume delivering the planes and may also think about producing them jointly with Russia's Iranian partners.

“We also had to adapt our planes to Iran’s hot and humid climate and also to its rocky coastal areas, which necessitated certain changes to the planes’ original construction,” he said.

He also mentioned the Iranians’ desire for the joint production of Orion planes.

“Well, we have nothing against this idea and are ready to discuss it as part of a joint venture we are going to establish with our Iranian partners,” Yuri Varakosov said.

Ground effect planes, or ekranoplans, were originally developed by the Soviet Union in the 1960s as high-speed military transport vehicles, and were used mostly on the shores of the Caspian Sea and Black Sea.

http://worlddefencenews.blogspot.ru
China to Conduct Maiden Flight of World's Largest Amphibious Aircraft in May
Built in the mid-1960s, the 100-meter-long Caspian Sea Monster was the biggest ekranoplan of all time, and weighed an impressive 544 tons.

Despite its weight, the vehicle could lift heavier loads off the ground than any other plane at the time.

The Caspian Sea Monster's successors, including the Lun (Hen Harrier) and the Orlyonok (Eaglet), were much smaller and lighter and were used both for military and civilian purposes.