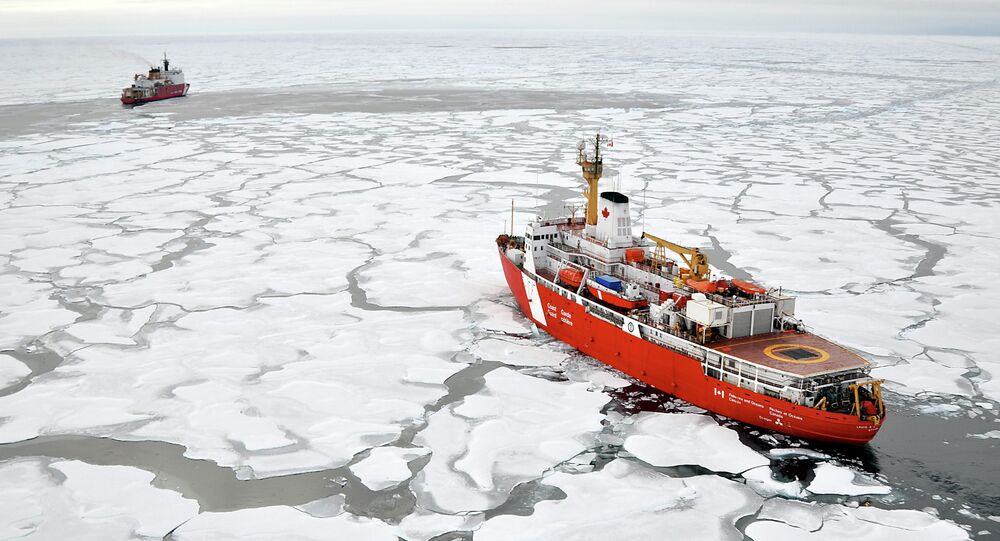 Russia and Denmark could carve up the North Pole after their separate claims to the world’s icy peak get a nod from the United Nations.

Russia and Denmark could partition the Lomonosov Ridge, an underwater mountain range, which runs across the North Pole that splits the Arctic in two, if a UN Commission on the Limits of the Continental Shelf (CLCS) allows them to expand their continental shelves northward, Leopold Lobkovsky, deputy director of the Institute of Oceanic Studies in Moscow, told Radio Sputnik.

“The Lomonosov Ridge connects our continental shelf with Denmark’s, that’s why we can extend and they can extend. If our claims are approved Russia and Denmark could carve it up somewhere around the North Pole,” Lobkovsky said.

© Sputnik / Alexander Liskin
Russia Has No Plans to Change UN Arctic Shelf Expansion Bid Amid Danish Claims
The updated application also refers to unsettled Russian-Danish issues of the delimitation of maritime territories. Denmark’s application dated December 2014 for the shelf north of Greenland concerns a major part of the territory Russia applies for – particularly, the polar territory and part of the Lomonosov Ridge.

In keeping with the UN Convention on the Law of the Sea, a country wishing to expand its shelf needs to prove that the underwater features adjacent to it are natural geological extensions of the country’s continental shelf.

A coastal state can always claim its rights to the shelf within the distance of 200 nautical miles from the coastline.

In an interview with Radio Sputnik, political analyst Alexei Gusev said that other countries could also demand their share of the Arctic Ocean. These countries are Canada, the US, Norway, Iceland, Sweden and Finland.

Gusev believes, however, that the Russian and Danish claims  are more preferable.

"Why? Because the Lomonosov Ridge runs from Russia via the North Pole to Greenland, which is Danish territory. We and Denmark could settle this issue between us as part of the proposed division of the Lomonosov Ridge. They haven’t responded yet, arguing that it’s up the UN commission to decide,” Gusev noted.

He added that because the Arctic seabed is believed to hold up to 22 percent of the global resources of oil and gas he expected a tough fight ahead.

“I think that it won’t be long before major plays join in the fray. China’s for one, has already said that it has its own interests in the Arctic, so I think it’s going to be a tough battle,” Alexei Gusev warned.

© Sputnik / Vera Kostamo
Shelf Life: Russia's Arctic Claims Pose No Danger
In June 2002, the application was examined and declined due to the lack of details on the bottom relief maps and justification of the continental nature of the above-mentioned ridges and their connection with the Siberian shelf.