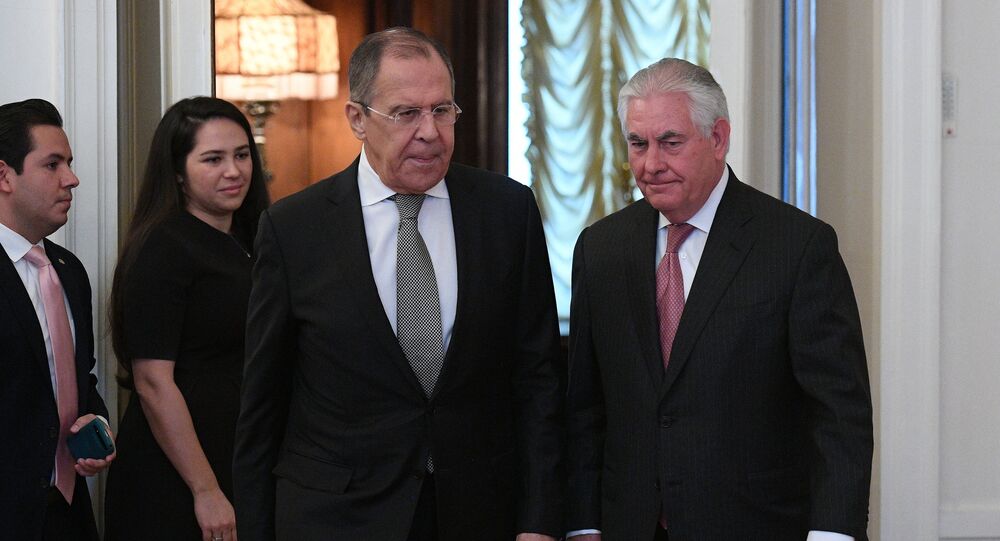 Lavrov reiterated Moscow's calll for an "independent and thorough investigation" in both the Idlib and Sha'irat incidents. "We have other affects available to us, and we are not trying to impose anything on anyone," the Russian diplomat said, but Moscow doesn't believe it is fair or just to place all blame on Damascus prior to an objective probe into the alleged chemical attack. Lavrov expressed that a UN security council resolution would be counterproductive and may only legitimize accusations against Damascus. On April 14, Moscow will host Afghanistan and other central Asian nations for a summit, he said, adding that has an extended an invitation to the US to allow their representation at the summit.

Lavrov and Tillerson discussed the "special responsibility" Moscow and Washington bear for maintaining "strategic stability." This will include "business-like, pragmatic" discussions on arms reductions, Lavrov said. Business interests in both nations want to reverse the trend of negative relations between Moscow and Washington, he added.

"On the whole, we all realize the current situation is far from easy, and the international situation is far from easy," and that other parties may want to try and take advantage of these tensions. "We are open to this dialogue..and not just dialogue, but [to] working together," in areas of mutual interest. "We understand each other bettter after today's talks," Lavrov noted.

Facebook
Twitter
Whatsapp
Viber
Telegram
Download videoCopy linkGet code
Russian FM Lavrov Holds Joint Presser With US State Secretary Tillerson Following Talks
"There's a low level of trust between our two countries," Tillerson began his remarks. "The world's two foremost nuclear powers cannot have this kind of relationship," he said. He then stated Moscow and Washington should end tit-for-tat strategies which can provoke tensions. Moscow and Washington have agreed to create a working group dedicated toward solving low-level problems. "We both believe in a stable and unified Syria," the US diplomat said.

Tillerson said Washington's belief that Assad planned and executed a chemical attack is "conclusive" and said it is not the first time Damascus has used chemical warfare since 2011. Lavrov disagreed: "Russia insists on an objective investigation." There is "no proof" that Washington's account of what happened in Idlib is true, Lavrov said.

"They have brought this on themselves," Tillerson said of international pressure against Assad. "We think its important that Assad's departure is done in an orderly way," he added. "The final outcome in our view does not provide a role for Assad or the Assad family. We will not accept that, we don't believe the world will accept that," Tillerson said. Lavrov said the US and Moscow are not "worlds apart" on many issues, as one reporter had suggested. "We need to learn the lessons of the past, otherwise we cannot be successful in the present," Lavrov said.

For instance, in Yugoslavia, NATO "launched war" to bomb presidential areas, the Chinese embassy, and when they finally ran out ammunition, they went to the UN Security Council. "Many of these actions were in violation of the Geneva convention," Lavrov said. Similarly, in Iraq, "all the pretexts" the US used for invading the country, such as WMDs, "were fake." In Libya, an international coalition that ousted former dictator Muammar Gaddafi has not produced an positive example that might be followed for a regime change operation.

"The very statehood of Libya is even in danger right now," the Russian foreign minister pointed out. Moscow knows the "obsession" with overthrowing a dictator, Lavrov said. "We've seen all that and we all know how it's going to end."

Tillerson said cybertools have "emerged" to influence elections as well as interfere with the software systems relied on by weapons systems. "I can only confirm that we are interested in having close cooperation on cybercrime," Lavrov stated.

"The Obama administration turned down… and did not respond" to a proposal from Moscow to work together on cybercrime. Lavrov still thinks an accord can be reached: "We would welcome this kind of cooperation." With regard to the working group, the group would respond to issues as they arise, especially "artificial" problems that may emerge.

"We discussed no further sanctions" based on recent events in Ukraine, Tillerson said. "He did not make any threats in our discussions today," Lavrov confirmed. The Russian diplomat said he is not interested in hypothetical and speculative scenarios in Syria, but rather, "we want to establish truth." "There is a presumption of innocence" in Syria, Lavrov said.

Lavrov said that he had requested evidence that Russia interfered with the US elections, but that he has seen nothing resembling fact.

Some parties want to "torpedo" US-Russia relations, Lavrov said, whether to achieve political goals or foreign policy gains. But there has not been anything resembling bulletproof evidence that Russia actively meddled in America's 2016 election.

Lavrov said it was a "need" for the Korean Peninsula to be de-nuclearized. This should be achieved solely through peaceful means, Lavrov noted.

"With respect to Russia's complicity or knowledge in the chemical attack," the attack was conducted exclusively by the Assad regime forces, Tillerson said, adding that the US has no reason to believe Moscow aided and embedded the attack in Idlib.

Obama never struck the Al-Nusra Front in Syria, but only Daesh (ISIL) positions, indicating confused priorities on behalf of Washington, the Russian foreign minister said. Lavrov added that Daesh is a "much bigger threat" than Assad's regime. "If we change the regime, it is very possible we cannot defeat Daesh and that we will be defeated" Lavrov warned. The diplomats concluded the news conference by shaking hands.