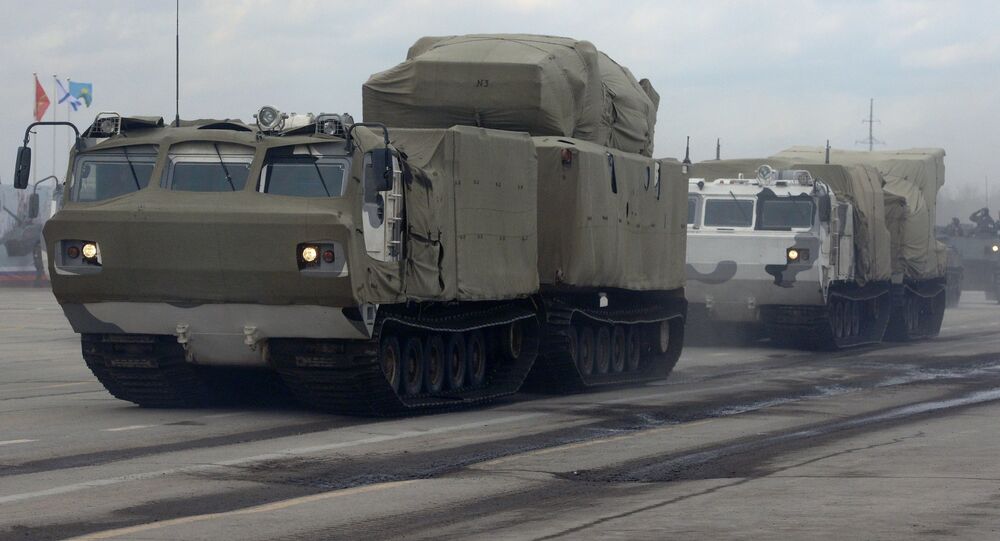 The May 9 Victory Day parade on Moscow's Red Square will see the presentation of the most advanced Russian military hardware due to be used in the Arctic region; even so, Russia's intention is not to initiate an arms race in the Artic, Russian military expert Igor Korotchenko told Sputnik.

© Sputnik / Vitaliy Ankov
Masters of the Arctic: Russia to Permanently Station Submarines in Icy North
In an interview with Sputnik, Russian military expert Igor Korotchenko said that Russia will not unleash an arms race in the Arctic region despite the fact that during the May 9 Victory Day parade on Moscow's Red Square, the newest Russian military equipment due to be used in that region will be on display.

Earlier this week, Colonel General Oleg Salyukov, Commander-in-Chief of the Russian Ground Forces, told RIA Novosti that the Russian Defense Ministry will for the first time present its new Arctic military equipment during the May 9 Victory Day celebrations on Red Square.

Korotchenko, who is also chief editor of the magazine National Defense, said in this context that the Arctic is more than merely important to Russia from a military point of view.

© Sputnik / Iliya Pitalev
A DT-30 Vityaz all-terrain tracked carrier, due to be used in the Arctic, during a drill held ahead of the military parade on Red Square on May 9, 2017

"We are not going to begin an arms race there, and we will just protect what belongs to us in the Arctic, where we are deploying those military components that we deem necessary," he said.

Korotchenko recalled that "at the same time, the Arctic is open for cooperation, something that Russian President Vladimir Putin said at a recent Arctic Forum, when inviting other countries to take part in joint projects."

"For us, the Arctic is important not only from a military standpoint, but also in terms of potential resource opportunities. This region has huge reserves of hydrocarbons, which will contribute to the economy of our country in the future," he said.

According to him, Russia's military potential in the Arctic is also needed to protect the country's economic interests.

"You need to be able to protect your natural wealth, because in the modern world, international law, as you know, sometimes looks like toilet paper," according to him.

© Sputnik / Vitaliy Ankov
The Pantsir-S1 short range missile and anti-aircraft artillery weapon system is involved in the integrated training on fire control and management of the Far Eastern Military District's Fifth Army at Sergeyevsky base in Primorye Territory. File photo

He said "a major player can annul certain agreements and start a story from scratch, something that we saw in the West's actions in a whole array of regions."

"To avoid such a scenario in the Arctic, we create both economic and military potential there, which will add to Russia's defense capability on the whole and will help protect our economic interests and resources in the Arctic," Korotchenko concluded.

Salyukov, meanwhile, said that during the May 9 Victory Day Parade, the public will see air defense systems that have been specifically modified for the Arctic's severe weather conditions, such as the Tor M2DT missile system and the Pantsir S1 anti-aircraft artillery system as well as an array of support vehicles.

"In addition, this year we plan to showcase Arctic modifications of well-known tanks, including the T-72B3M," Salyukov said.

From its previous versions, this T-72 modification differs in many ways; first of all, it has an enhanced protection system.

The engine-transmission compartment and rear part of the tower are covered with anti-cumulative screen grids and additional blocks of dynamic protection called Relict.

© Photo : russianhelicopters.aero
Northbound: Russia to Form New Arctic Air Defense Division in 2018
Moreover, the T-72B3M is equipped with a 1,130 horsepower diesel engine. It also has an automated control system that informs the driver of any tank malfunctions.

If that isn't enough, the new tank also boasts strengthened mine protection technology and an automatic loader that has been modified for the newest ammunition.