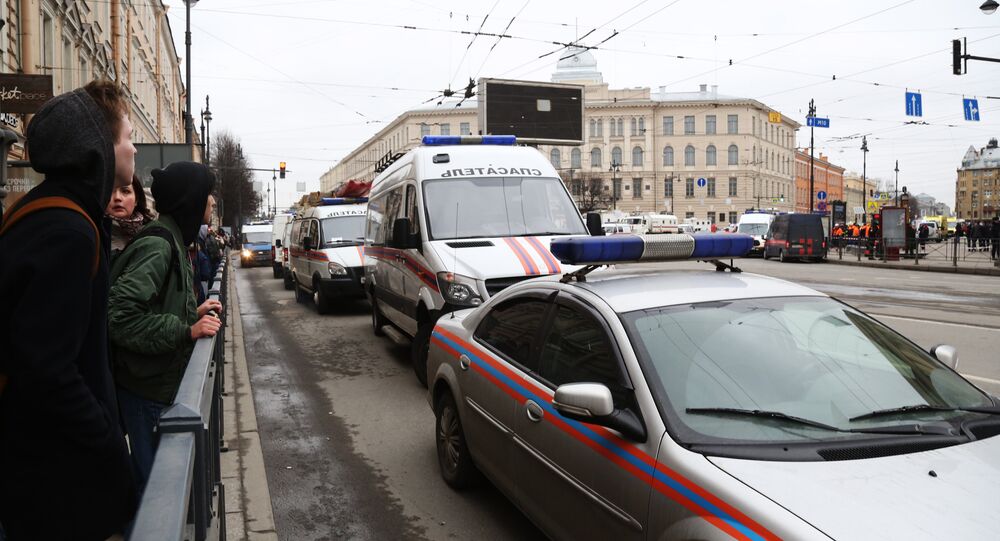 Eight people have been detained in connection with St. Petersburg metro terrorist attack.

An explosive device, fire arms and ammunition have been found at homes of detained individuals, the Russian Investigative Committee said.

"Jointly with the Russian Federal Security Service and the Interior Ministry, six people in St. Petersburg and two in Moscow have been detained in connection with the terrorist attack today, on April 6," the committee's spokeswoman said.

One of those detained is a woman.

"An explosive devise identital to that found at the Ploschad Vosstaniya St. Petersburg metro station, fire arms and ammunition have been found in homes of those detained."

© REUTERS / Grigory Dukor
Nine Facts About St. Pete Suicide Bomber
The news comes after on Monday, an explosion occurred in the St. Petersburg underground on the stretch of rail between the Sennaya Ploshchad and Tekhnologichesky Institut metro stations at around 3 p.m. local time (12:00 GMT). The blast killed at least 14 people, according to Russian Minister of Healthcare Veronika Skvortsova. Forty-nine people were wounded.

On Wednesday, the Russian Investigative Committee named Kyrgyzstan native 22-year-old Akbarzhon Dzhalilov who was the citizen of Russia as the suicide bomber behind the attack. His identity was later confirmed by a DNA test. The investigation also found out that the same man had left a bag with an explosive device on the Ploschad Vosstaniya metro station. It was neutralized by specialists.