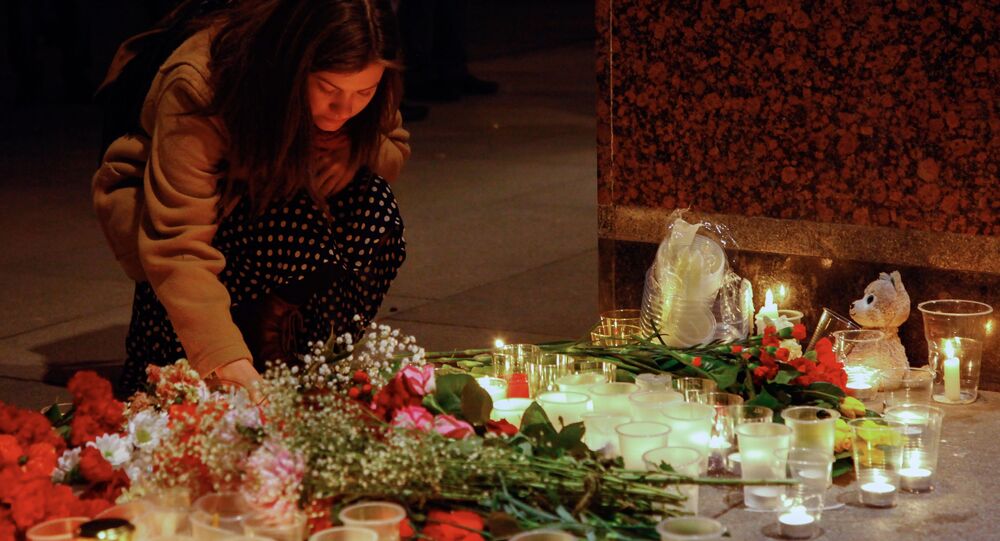 The death toll in the terrorist attack in St. Petersburg subway rose to 14 people on Tuesday, while the investigators are working on several versions, including the possibility that the perpetrator died in the explosion.

© Sputnik / Anatoly Medved
Russian PM Medvedev Calls for Total Fight Against Terrorism After St. Pete Blast
ST. PETERSBURG (Sputnik) — Security has been boosted in many cities across the country, while the heads of states across the world offer their condolences and the Russians are organizing memorial and support meetings.

On Monday, about 2:30 p.m. local time (11:30 GMT) a blast occurred in a train car on the stretch between the Sennaya Ploshchad and Tekhnologichesky Institut stations. Another blast that was supposed to take place on Ploshchad Vosstaniya was prevented by bomb technicians.

Russia's Investigative Committee opened a criminal investigation into a suspected terrorist attack, but said that it was looking into other versions as well.

According to the minister, 11 died at the site of the incident and three people succumbed to their injuries later. Skvortsova added that 49 people were being treated in the hospitals of St. Petersburg.

The minister said that all of the people who received serious wounds were in a stable condition.

"There have been no deaths during the night. All of the injured, including those, whose condition is critical, are stable at the moment," Skvortsova told reporters.

© AFP 2020 / Alexander BULEKOV
Trump: Explosion in Russia's St. Petersburg Metro 'Absolutely Terrible Thing'
According to the minister, the doctors were using all options available in the country.

St. Petersburg Governor Georgy Poltavchenko clarified earlier in the day that 12 people were in critical condition, 27 were in serious condition, 10 were in fair condition.

According to Poltavchenko, several victims were not from St. Petersburg, including 17 residents of other Russian cities, and three foreign citizens, from Belarus, Tajikistan and Uzbekistan.

© REUTERS / Anton Vaganov
French Presidential Candidates Offer Condolences to Russia Over St. Pete Blast
On Tuesday morning, St. Petersburg subway, all of whose stations were closed on Monday following the attack, resumed the work as usual. The other types of transport continue to work in an enhanced regime.

However, several subway stations were closed again in the morning. By midday local time, it became known that 10 stations on the blue line, the one where the explosion took place, were closed. The hub that links, among others, Sennaya Ploshchad station was also closed. By 2:30 p.m. the metro resumed work as usual.

The security was boosted on all subway systems across Russia immediately after the explosion. The measures were also taken to secure other types of transport and crowded places.

Chairman of the Russian Investigative Committee Alexander Bastrykin, who arrived at the site of the tragedy, promised that everyone linked to the tragedy would be discovered. Bastrykin also said that all the circumstances of the incident would be thoroughly inspected.

© AFP 2020 / Olga Maltseva
People Lay Flowers to Commemorate the Victims of St. Pete Metro Blast
16
Earlier on Tuesday, Svetlana Petrenko, the spokeswoman of the committee, said that the investigators were conducting a series of investigative actions, including questioning, inspections and multiple tests. The investigators are also studying the security cameras' footage.

The Kazakh National Security Committee (KNB) is working with the Russian Federal Security Service on the investigation of the blast and the two are actively exchanging information.

According to Nurgali Bilisbekov, the deputy chairman of the KNB, the two services were investigating a possibility of a Russian citizen being tied to the crime. Bilisbekov stressed that the information about a Kazakh citizen being linked to the incident was not true and added that, while the person who carried out the attack may be found in the near future, the security service will still have to find the organizers as well.

The Investigative Committee revealed the name of the suspected perpetrator, adding that it was the same person that left a later defused explosive device at another metro station. The suspect is Akbarzhon Jalilov, a Kyrgyzstan native.

Russian Minister of Emergencies and Disaster Relief Vladimir Puchkov earlier in the day convened a special session of the working group of the governmental commission on preventing and dealing with emergency situations.

© Photo : Pixabay
Western Media Berated for Wild Speculation Over St. Petersburg Attacks
Puchkov said the help to the victims of the explosion was discussed. The minister also thanked the city's services for acting in a timely manner. Puchkov stressed the coordination and interaction of the city and state agencies.

Several countries offered their help in investigating the attack and helping its victims, including the United States, Ukraine, Belarus and a few others.

Kremlin spokesman Dmitry Peskov said that Russia might turn to other countries if it is needed.

Head of the Crimea Sergei Aksyonov said that Crimea was ready to welcome the people who were injured by the explosion at its resorts to help their recovery.

Several Russian cities are holding memorials, some have also declared mourning as a sign of solidarity with St. Petersburg.

© Sputnik / Aleksandr Tarasenkov
Courage and Stoicism: St Petersburg Residents Show What They're Made Of in the Wake of Subway Blast
The residents of Russia's second largest city responded to the tragedy by trying to help those in need. Taxi services and private citizens offered free rides to people stranded in the center of the city in the aftermath of the tragedy.

People have been bringing flowers, candles and icons to Tekhnologichesky Institut station.

According to a Sputnik correspondent, all of the wreckage has been cleared from the station but the smell of something burnt still lingers in the air.

Both the head of the Russian Orthodox Church, Patriarch Kirill of Moscow and All Russia and Supreme Mufti of Russia Talgat Tadzhuddin expressed their condolences and called for the united front in the face of the terrorist threat.