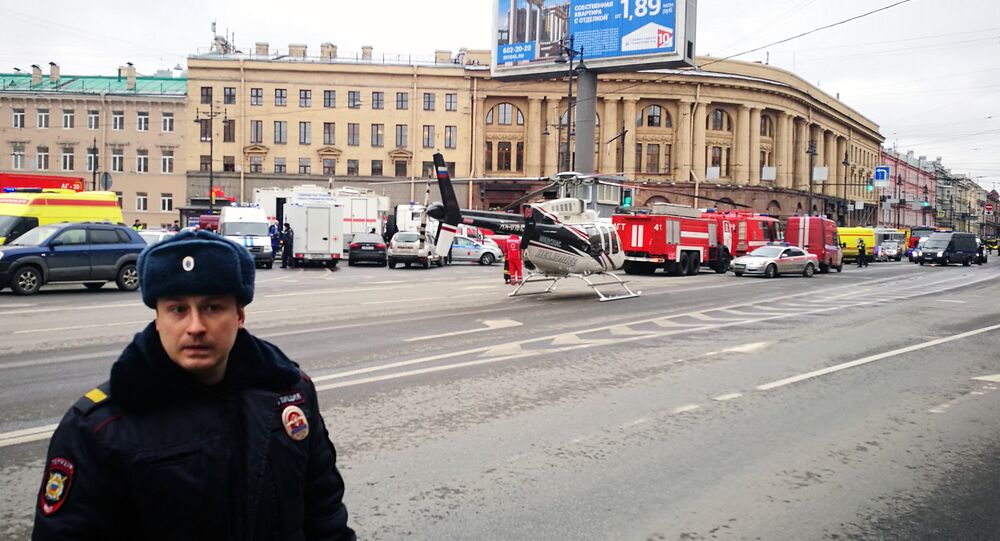 The deadly explosions that occurred in Saint Petersburg on Monday seem to be a terrorist attack, chairman of the Russian upper house of parliament's Defense Committee, Viktor Ozerov, told Sputnik.

© REUTERS / Anton Vaganov
Subway Blast Kills 11, Injures 45 in St. Petersburg - Official Data (LIVE UPDATES)
MOSCOW (Sputnik) — The blasts rocked either one or two central stations of the Saint Petersburg metro, killing at least ten and injuring about 30 people according to the reports of various sources.

"Most likely, it is a terrorist act, all signs point to that, especially the existence of the damaging elements in the explosive devices," the lawmaker said.

The devices were reportedly rigged with shrapnel.

The time and place of the explosions that occurred in Saint Petersburg metro on Monday may have been chosen by perpetrators to coincide with Russian President Vladimir Putin's visit to a media forum held in the city, chairman of the Russian upper house of parliament's Defense Committee, Viktor Ozerov, told Sputnik.

"The choice of the place and the timing of these blasts is not accidental, the president of Russia is in [Saint Petersburg], the media forum is taking place there, there are many journalists," Ozerov said.

The senator noted that the relevant services may have failed to prevent the threat, including in terms of ensuring the security in the metro.

Various reports indicate that one to two explosions occurred in the metro in the center of Saint Petersburg earlier in the day, killing at least ten and injuring about 30 people.