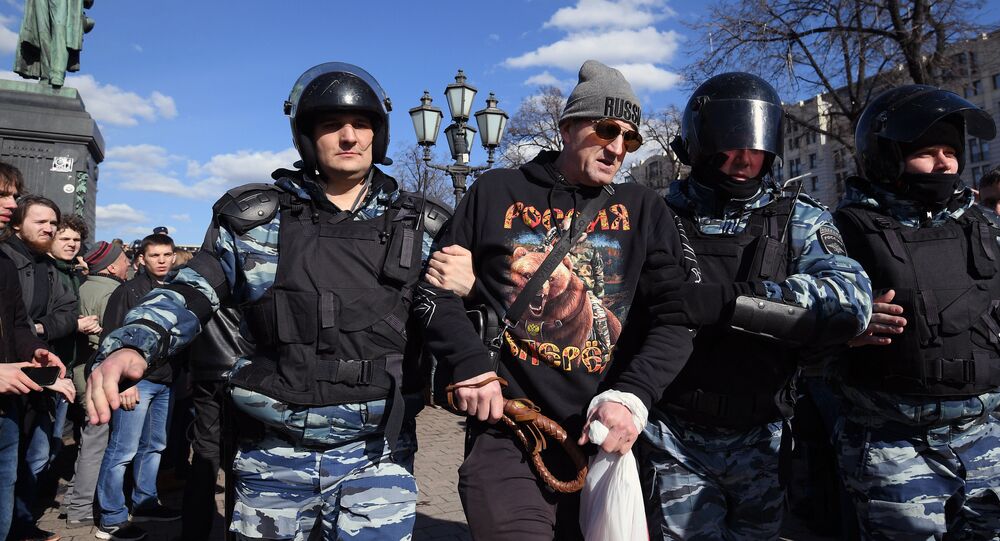 Kremlin Concerned About Coercion of Civic-Minded Citizens Into Illegal Acts

The Kremlin spokesman said that people with an active civil position could be beguiled into committing illegal actions by a third party.

MOSCOW (Sputnik) — The Kremlin is not concerned about new protests but warns against the coercion of civic-minded citizens into illegal actions, Kremlin spokesman Dmitry Peskov said Monday.

"It is not a matter of fear, we are concerned that someone will continue to use active citizens, people who take an active civil position, for their own purposes, calling on people to commit illegal and uncoordinated actions. This is what causes concern," Peskov told reporters.

Addressing the unsanctioned rallies held Sunday in Russia, including in Moscow, Peskov said "the manifestation of a civic position and holding various events in accordance with the law does not cause fear."

Peskov added that "we cannot show the same respect to those who knowingly mislead people and those knowingly did it yesterday and earlier, provoking illegal actions."

"We cannot treat those who consciously misled minors, in fact children, deliberately encouraging them — including by promising some rewards — to take part in an uncoordinated action in an uncoordinated place, thereby exposing the safety and even the lives of these children and minors to danger," he stressed.

Peskov pointed out that some of the protests in a number of Russian cities were authorized and they were held in accordance with the law, adding that the Kremlin would take into account the people's demands.

"All the events held in accordance with law in authorized places and on authorized time will be taken into consideration," Peskov said.

The Kremlin cannot agree with and therefore take into account the US State Department's and the European Union's statements on unsanctioned protests in Russia, Peskov said.

"We cannot agree with this appeal. Therefore, in this case we cannot take this appeal into account," Peskov told reporters when asked to comment on statements issued by Brussels and Washington in response to the unauthorized rallies on Sunday.

According to the Kremlin spokesman, Russian authorities were assessing the situation sensibly.

"The Kremlin has taken an unbiased look at the scale of yesterday's campaign and is not inclined neither to underestimate nor to exaggerate its scale," Peskov said, adding that the Russian president had been involved in constant dialogue with people from various background and spheres to get better understanding of the existing problems.

On Sunday, some 7,000-8,000 people participated in an unauthorized protest against corruption in the center of Moscow, organized by Russian opposition figure Alexey Navalny, with police detaining around 500 people during the demonstration. The Moscow authorities rejected Navalny's application for an anti-corruption rally in the city center planned for March 26 and proposed activists to hold the demonstration in other districts of the capital. Representatives of the Moscow authorities told Sputnik that Navalny had refused the offer.

© AP Photo / Sergei Grits
US Demands Immediate Release of Detained Belarusian Activists It Helped Fund
On March 24, a representative of the Moscow authorities said that the protest would be considered unauthorized even in case the activists gather in the places offered by the City Hall as the offer was rejected by Navalny.

The Moscow City Directorate of the Interior Ministry released an official warning asking all citizens to abstain from participation in the unlicensed event, and warned the organizers of the event that they would be responsible for safety of people participating in the rally.

Moscow City Hall praised the police and the Russian National Guard for their high professionalism during the rally, stressing that the law enforcement agencies prevented numerous incidents.

Claiming that media coverage of unsanctioned protests in Moscow was limited is wrong, the Kremlin spokesman said.

"There are so many channels for getting information that it is completely wrong to say that it is being limited somewhere or being closed by someone," Peskov told reporters.

He said, "The information is plentiful, it is absolutely free in its circulation and distribution, therefore there can be no fears or concerns in this case."

Russian Foreign Minister Sergei Lavrov said the reaction of the west to detentions during an unauthorized rally in Moscow is a sign of double standards.

"You spoke of the society’s reaction, to be honest I only heard the reaction of officials in several European capitals and Washington. You see, when the same events trigger different reactions, these proverbial double standards come to mind. I do not remember anyone being concerned, or at least publicly, over the decisions taken recently in Germany, the Netherlands and Austria where authorities banned several rallies," Lavrov told a press conference.

© AFP 2021 / CHRISTOPHE SIMON
Tear Gas vs. Molotov Cocktails: Scuffles Erupt at Rally Against Police Abuse in Paris
He said that the decisions of Russia's authorities as for the rallies' participants were made within the framework of their powers, adding that if in western countries demonstrators do not move across the agreed routes, local police sometimes use tear gas and rubber batons against them and reporters covering such rallies could be injured by police officers, just like the RT journalists in the United States in fall 2016.

Earlier in the day, US Department of State acting spokesperson Mark Toner said that Washington "strongly condemns the detention of hundreds of peaceful protesters" during the rally.

The European External Action Service (EEAS) said in a statement that police activities carried out in Russia "prevented the exercise of basic freedoms of expression, association and peaceful assembly," which are enshrined in the country's legislation.