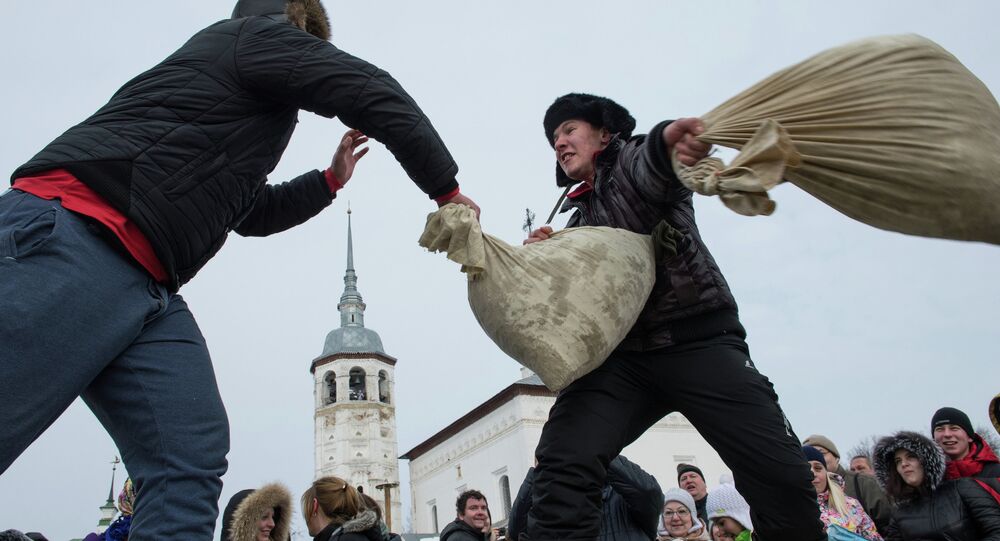 The participants in a fist fight at a Russian festival, whom journalists of Britain's The Mirror tabloid presented as aggressive football fans, said in an interview with RT that they have nothing to do with football and don't understand the reasons behind the newspaper's decision to publish false information.

Yuri Sidorov and Anton Smirnov, two Russian citizens who participated in a mass fist fight during Maslenitsa celebrations at the Kremlin in Izmailovo, reacted to the publication with humor. Both of them have been in combat sports for many years, and are not particularly fond of football.

"In my opinion, you can immediately see that this is not a training of football fans. I was very surprised when I heard about this publication. This is an obvious falsification. The information has nothing to do with the event that was held. We have been organizing traditional Maslenitsa games for the last five years […]. They include several competitions: music, dancing, physical activity — tugging on a stick, wrestling and fist fighting, which was caught on the video," Sidorov told RT.

The newspaper illustrated its "shock investigation" with corresponding videos and pictures, depicting several Russian men fighting in the street.

However, it turned out that the pictures and videos the newspaper used as proof "for its findings" were taken during the traditional Maslenitsa festival (Slavic holiday) celebrations at the Kremlin in Izmailovo in the east of Moscow, where the fist fighting was a part of celebration's program.

"Most of the participants have nothing to do with any kind of fanaticism. They are mostly coaches and university students. This is an open event. Anyone can come if they adhere to our rules. We invite everyone. Sometimes people even step out of the crowd after eating pancakes, just to warm up," Sidorov explained.
Anton Smirnov, was very surprised about the Mirror's publication as well.

"We are simply reviving ancient Russian traditions. This is a positive event that unites people. The pictures depict a usual "wall against wall" fighting. This is one of the most fun traditional games for Maslenitsa. At the same time, people make pancakes, play traditional music and entertain children," Smirnov explained.

© Sputnik / Alexander Vilf
'Blah-Blah-Channel': Russian Football Fans Troll BBC for Its Chiller Diller
Answering the question of what his attitude toward football is, the young man said, "I hate it. I think this is not a male sport."

Meanwhile, the organizers of the event in the Kremlin in Izmailovo — the Russian Federation of Ethnosport — are going to file a suit against the newspaper for publishing false information.

"Yes, we are going to do this because they published a falsification. I, personally, do not understand the purpose of this publication," a representative of the Federation said.

Earlier, representatives of The Mirror tabloid acknowledged that its exclusive article on Russian football fans allegedly preparing to attack UK fans during the 2018 World Cup was incorrectly illustrated with photos of fist fights taken during the traditional Maslenitsa festivities in Moscow, a spokesman for the media outlet said Tuesday.

However, the federation's representatives expect the newspaper to officially refute all incorrect facts mentioned in the article.