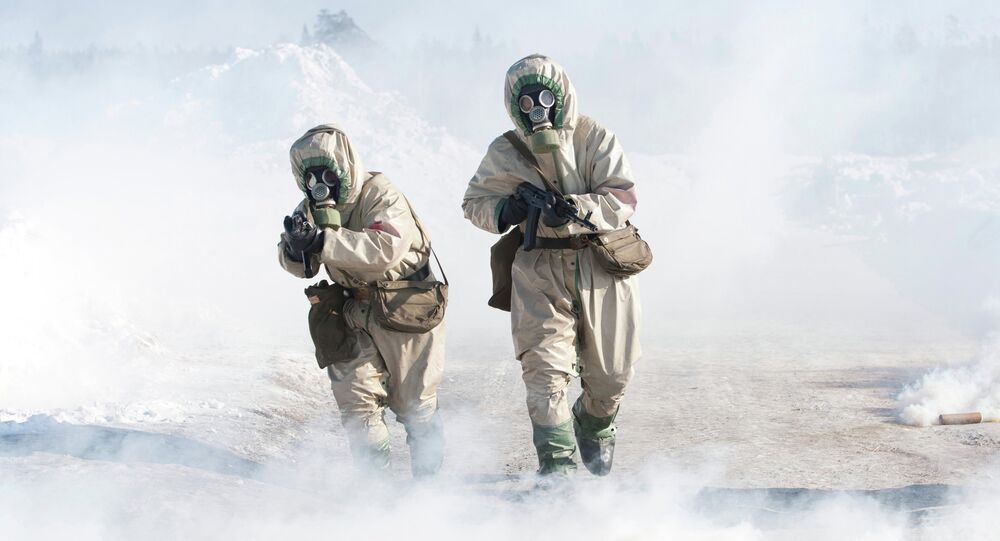 Chemists from Moscow State University created nanoparticles capable of neutralizing the most powerful types of chemical weapons, such as the VX gas and others similar highly toxic pesticides.

Regina Konstantinova — The most toxic types of chemical weapons, which can kill a person in minutes even in minimal concentrations, belong to the class of so-called organophosphorus chemical compounds. These substances were first synthesized in Nazi Germany in the late 1930s, but had been widely spread in the military industry only in the middle of the last century, when the most dangerous types of these substances were created, such as the British nerve gas VX and its Soviet analog, VR.

© REUTERS / Muhammad Hamed
Iraqi Leader Calls for UN-OPCW Probe Into Reported Chemical Weapon Use in Mosul
According to the 1997 Chemical Weapons Convention, all stocks of VX, VR, sarin and other combat gases were to be destroyed in all countries of the world. Only Russia and the United States recognized the presence of such substances on their territories, but international security experts suspect that stocks of these gases exist in a number of countries in the Middle East and South Asia. In addition, other less hazardous versions of organophosphorus compounds are still used as pesticides.

Therefore, the problem of neutralization of poisons and pesticides remains a major problem for scientists. A group of Russian chemists, led by a professor at the University of North Carolina at Chapel Hill and Lomonosov Moscow State University, Alexander Kabanov, suggest using special nanoparticles — "nanozymes."

"In the end of the 1980s, we proposed using 'polymeric micelles' — spontaneously formed polymeric nanoparticles — for delivery of small drugs. This concept further developed by us as well as many others across the globe eventually resulted in several drugs tested in human trials and being approved for human use," professor Kabanov told Sputnik.

"Soon we started working on polymeric micelles that can incorporate biopolymers via electrostatic interactions. Much of this work was done in the University of Nebraska Medical Center in Omaha, Nebraska where I moved in 1994," he said.

© REUTERS / Ranjit Singh
Chemical, Biological Weapons Could Be Used Against India in War, Indian Army Chief Warns
By 2010, when the Russian Government announced a program of "Megagrants" to attract foreign scientists to Russia, Kabanov's group had already successfully applied polymeric micelles for delivery of enzymes to the brain to treat stroke, hypertension, Parkinson's disease and other disorders. Their Megagrant award was to form a laboratory in Moscow State University, where they focused their work on projects to improve human health.

"Our goal was to apply our nanotechnology, which we called ‘nanozyme,' to enable the medical use of enzymes developed by the colleagues in Moscow. One of those enzymes was organophosphorus hydrolase that is capable of degrading toxic pesticides and chemical warfare agents at very high rate," the scientist explained.

However, this enzyme had some disadvantages: because of its bacterial origin, an immune response was observed as a result of its delivery to the organism of mammals. Moreover, organophosphorus hydrolase was quickly removed from the body.

"We discovered that as result of inclusion of this enzyme in a nanozyme particle the immune response becomes weaker and, on the contrary, both the storage stability of the enzyme and its lifetime after delivery to an organism considerably increase. Experiments on rats have proven that such a nanozyme efficiently protects organisms against lethal doses of highly toxic pesticides and even chemical warfare agents, such as VX nerve gas," professor Kabanov said.

© Wikipedia / Jeffrey W. Lotz, Florida Department of Agriculture and Consumer Services
Beemageddon: Pesticides Kill Over 10 million Pollinators in Brazil
According to the scientist, several countries other than Russia are capable of producing the very same enzyme — organophosphorus hydrolase. There are also some attempts to use nanotechnology or chemical modifications to improve the performance of such enzymes in the body. "But the simplicity of our approach is very important for its future practical use," he noted. "You could get an organophosphorus hydrolase nanozyme by the simple mixing of aqueous solutions of an enzyme and a safe biocompatible polymer, which has actually been used in human trials for a different application."

In the experiment held by Kabanov's team, the results of which were published in the Journal of Controlled Release, rats received lethal doses of the two substances, VX and a pesticide called paraoxon. The administration of nanoparticles before and immediately after the administration of the poisons saved all the rats from pesticide exposure and 80% of the animals from nerve gas intoxication, while all the specimens of the control group had died.

"Organophosphorus poisons such as VX act very fast often killing the subject within fifteen minutes after the lethal dose is administered. However, our nanozyme also acts very fast. We report in our scientific paper that animals injected with this nanozyme ten minutes after acute intoxication with a lethal dose of a paraoxon rapidly abolished all signs of intoxication and survived," the professor said.

© REUTERS / Lim Se-young/News1
Son of Slain Half-Brother of Kim Jong Un Breaks Silence, Releases VIDEO Address
So, this nanozyme can act as an antidote and could save a poisoned subject if applied fast enough. For example, the brother of North Korean leader Mr. Kim Jong-nam, who apparently was poisoned by the VX gas, could have also been saved, if organophosphorus poisoning was recognized and he was rapidly administered a conventional antidote such as a  pralidoxime and atropine mixture, according to the chemist.

"Unfortunately, these antidotes do not guarantee a cure and require a high dose. Because of their toxicity and intolerance of part of the population one would not want to use them unless there was clarity that the nerve gas has been applied," professor Kabanov said. "In this regard, nanozymes or other similar very active enzymatic antidotes may prove to be both more effective and safe. This could make their application in case of emergency easier, and, hopefully, save lives."

The scientists hope that their report will inspire other scientists across the globe to develop similar nanoparticles. "It is a very important matter for humankind. The Chemical Weapons Convention has banned chemical warfare agents, but unfortunately not every country appear to follow it, and some of these agents are relatively easy to produce, which represents a great threat to societies," the chemist stressed.

"There is a need to protect the general population, emergency responders and military personnel against the use of nerve gases by terrorists or rogue regimes. Less known to the general public is that almost 40% of currently used pesticides are nearly as toxic as CWA and the use of these pesticides, due to self-poisoning, annually results in about 300,000 fatalities across the globe. In addition to protecting people exposed to these pesticides, there is also a significant need to protect livestock, as animals are also often poisoned by the use of the pesticides in agriculture," professor Kabanov claimed.