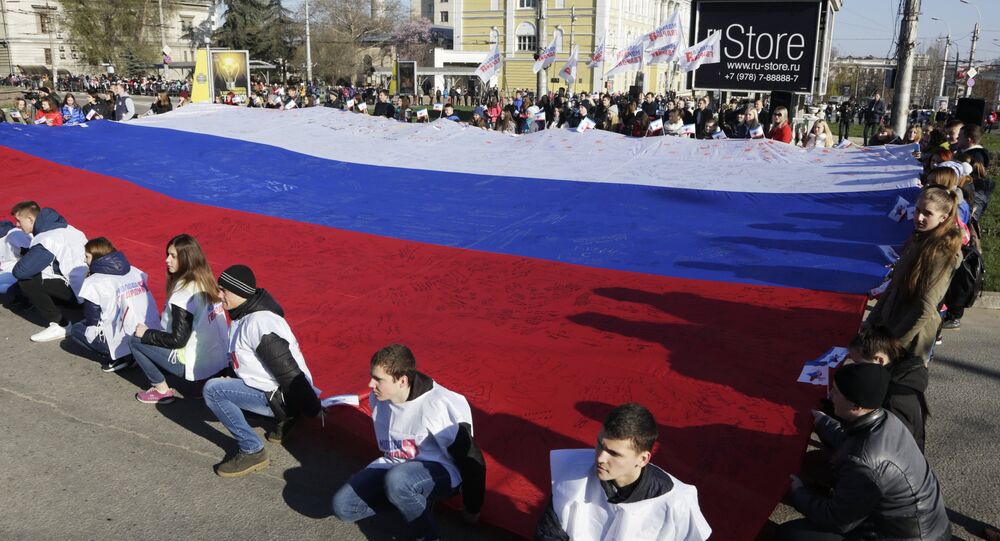 Crimea rejoined Russia in 2014 when about 97% of its citizens voted in favor of reunification in a referendum. Nevertheless, the West condemned the result, imposing several rounds of sanctions against Russia. Sputnik discussed the issue with Claudio D'Amico, foreign relations secretary for a regionalist political party in Italy, Lega Nord.

March 16 marked the third anniversary of the Crimean status referendum, which back in 2014 asked the local population whether they wanted to join Russia as a federal subject, or if they wanted to restore the 1992 Crimean constitution and Crimea's status as a part of Ukraine.

Nearly 97 per cent of the residents then voted for joining Russia. Claudio D'Amico, foreign relations secretary for a regionalist political party in Italy, Lega Nord then visited Crimea to monitor the referendum and shared his impressions with Radio Sputnik.

"I saw that the referendum was properly run. My party decided to recognize the independence of Crimea from Ukraine and the request of Crimea to become part of the Russian Federation," he told Sputnik.

The politician then said that when they came back to Italy they said to their countrymen that the referendum was legitimately held and the procedure that was used by Crimea was the same that Ukraine used when they got independence from the Soviet Union.

"When a political party in a country takes a strong position and starts saying the truth, people start understanding that this is an actual reality.

This is happening all over the world. Most of the information is not fair: they are still speaking about Crimea as a country which is being occupied by Russia, but some political parties took a position to recognize Crimea. Hence we started saying in Italy and in other countries with whom we maintain close foreign relations, such as the US, that we believe that the referendum was fair and the procedure was undertaken well and therefore we recognize Crimea as part of the Russian Federation," he said.

© Sputnik / Sergey Malgavko
Three Years On, Mainstream Media Fails to Set People Against Crimea's Reunification With Russia
Many people in Europe and the US started to believe that this is true, the politician argues. The public's opinion all over the world keeps changing. At the beginning, the mainstream media was showing the so-called "Russian aggression" in Crimea, but it was not true. However with time, and lots of opportunities in the social media, the public opinion started changing.

Claudio D'Amico also said that he has visited Crimea when it was still part of Ukraine and then he came when it was already Russian.

"I really saw the secession of the region from one country to another. I can say that the situation in Crimea, when it was part of Ukraine, was very bad. Ukraine simply forgot about Crimea, They did not get money, the peninsula was not developed while the local residents were able to see the neighboring Russian territories which were being developed," he said.

© Sputnik / Sergey Guneev
Deal With It: Poklonskaya Says Kiev Should Get Used to Crimea's Russian Identity
Nothing was working in Crimea back then, he said. Kiev gave nothing to develop the peninsula. Hence, the politician said, he saw with his own eyes that the people there were happy to change.

"I spoke to everyone, I was free to go everywhere: to a police station, in the streets, speaking with people. And everyone said that they preferred to be independent from Ukraine and join the great state of Russia. It was the mood and the feeling of the people. Nobody obliged them to vote for secession from Ukraine. They decided it on their own," he said.

However Crimea left Ukraine in conflict. Ukraine cut all financial channels to the peninsula, the politician said. People were unable to get money from ATM machines or use their credit cards. Water supplies were also cut. It was a very difficult time for a while, but with the help of Russia they have overcome everything and keep growing. The future remains bright for it, it will remain part of Russia but will keep its identity, he stated.