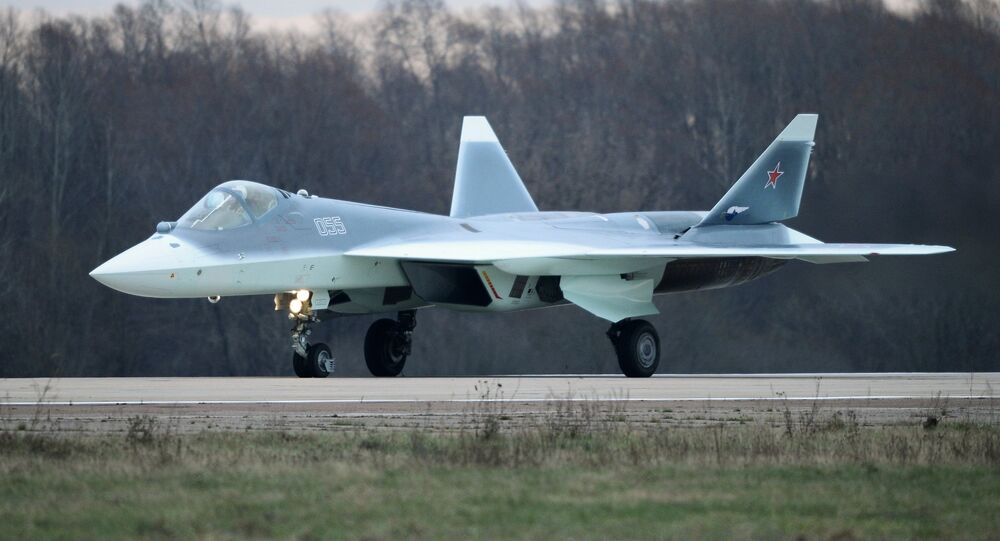 The fifth generation T-50 fighter jet, also known as the PAK FA, made its maiden flight in January 2010. Ayear later, the aircraft was presented at the MAKS-2011 air show. Mass production of the plane is due to begin later in 2017.

Earlier this month, a spokesperson for the United Engine Corporation told Sputnik that the T-50 is expected to carry out its maiden flight with a new engine in the fourth quarter of 2017.

Current T-50 prototypes are fitted with first-stage AL-41F1 turbofan engines manufactured by the aircraft engine maker Saturn. The second-stage, more powerful engines designated as "Izdeliye 30," are slated for production this year, ahead of the aircraft's planned mass production and delivery in 2018.

Speaking to Sputnik, Viktor Litovkin touted the new engine as more powerful and something that will help the T-50 fly in afterburner mode much longer than it can using its current engine.

"This engine, which is quieter and more efficient, will help the T-50 fly at a speed exceeding that of the 4 ++ generation fighters," Litovkin said.

He also specifically emphasized the significance of continuing to produce the T-50, a process that he said helps promote Russia's science and technology sector.

"Yes, such a plane is needed because progress cannot be stopped. The creation of such an aircraft helps to promote not only aircraft engineering but also the creation of new materials, engines, control systems as well as electronics and electronic warfare systems. All this adds to boosting our technology and scientific research," Litovkin said.

The T-50 is a single-seat, twin-engine jet fighter, and the first operational aircraft in the Russian Aerospace Forces to use stealth technology. It was designed by the Sukhoi Design Bureau. The aircraft will be used to achieve air superiority and assist in ground attacks.

Russia's T-50 (PAK FA) after being fitted with new engine is expected to carry out its first flight in the fourth quarter of 2017. pic.twitter.com/chJw7saXNA

© Sputnik / Sergey Mamontov
Not by PAK FA Alone: Russia's MiG Corporation to Develop 5th-Generation Fighters
Touching upon the T-50's stealth characteristics, Litovkin mentioned "a whole combination of features that allows the aircraft to be 'invisible.'" These include special composite materials and a sophisticated electronic warfare system.

In June 2016, the T-50 was deemed by defense industry sources to have "reached a stage where its combat capabilities are capable and ready for mass production, for use by the Russian Aerospace Forces."