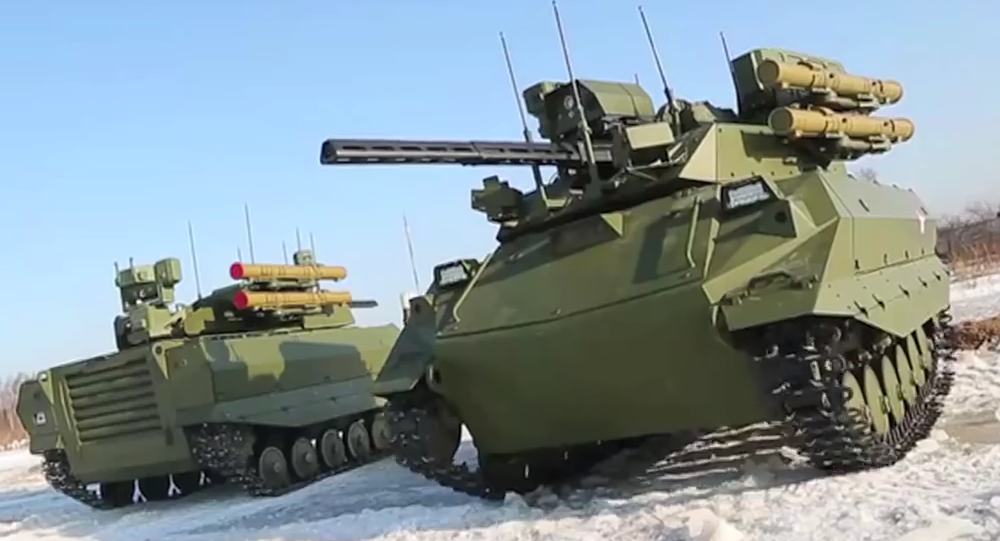 Russia could use its Uran-9 multipurpose robotic combat system in Syria, Viktor Murakhovsky, Editor-in-Chief of Arsenal of the Fatherland journal and defense expert told RIA Novosti.

Murakhovsly was commenting on British media reports citing a high-placed source in the Western intelligence community that a number of Uran-9 combat robots could soon be sent to Syria for use in urban warfare.

“There is no secret in that Russia is using its combat robots in Syria, not only the Uran-6 mine-disposal ones, but also the Soratnik and Nerechta systems. As for the Uran-9s, I’m not ruling out that that they could pop up in Syria, along with other systems,” Murakhovsky said.

He mentioned earlier statements by Russian “political and military leaders” about Moscow currently testing new types of weapons in Syria even before they actually enter service with the armed forces at home.

© Photo : Rosoboronexport
Russia Has Contracts on Sales of Combat Robots
“Some of these systems needed adjustment after they had been used in the Syrian campaign. Some of them were taken off the assembly line for trouble-shooting,” Murakhovsky said.

Viktor Murakhovsky said that he doubted the veracity of the British media reports, adding that mainstream media often present information taken from Arabic-language social networks as one coming from their sources within the intelligence community.

Igor Korotchenko, Editor-in-Chief of National Defense journal, agreed that the reports could have been organized by the British defense ministry to blame Russia for the use of disproportionate military force in Syria.

© Photo : Youtube/ Rokossovskiy Konstantin
Russia to Showcase Its Latest Combat Robots at Intl Forum Near Moscow
“The British Defense Ministry uses newspapers to produce all kinds of ‘leaks’ and materials as part of its ‘special operations,’ against Russia,” Korotchenko said.

“The use of robotic platforms is meant to make up for the current downsizing of our military presence in Syria and save the lives of our servicemen. We can already see a dramatic drop in our casualty figures compared with what we had during previous conflicts,” he emphasized.

The latest in a long line of military robots made in Russia, the Uran-9 unmanned ground combat vehicle is loaded with a machine gun, 30mm cannon that fires 350 to 400 rounds per minute, a coaxial 7.62mm machine gun and a battery of supersonic guided missiles.