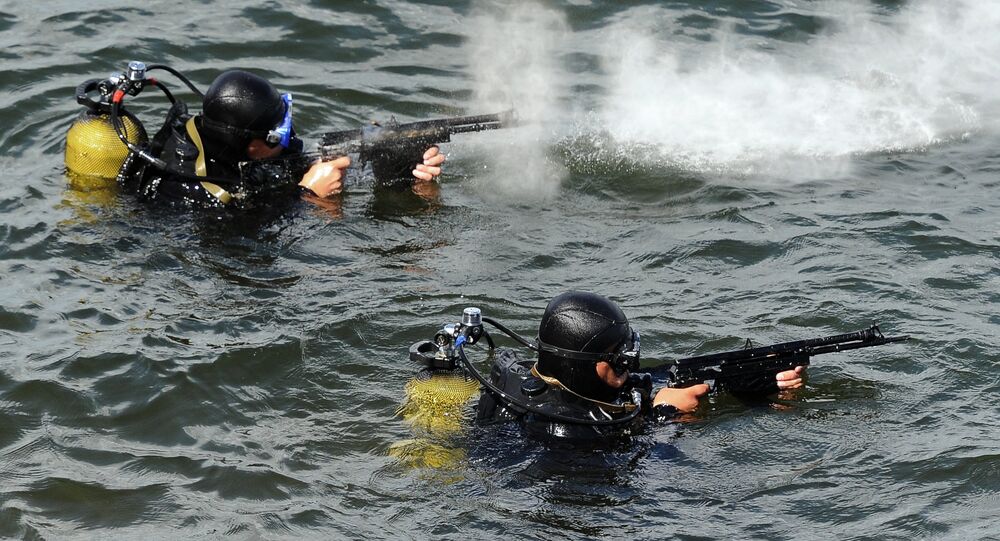 Next year Russia’s servicemen and National Guardsmen will be issued new submachineguns capable of firing underwater, the Federal New Agency reported, citing the director of the Central Design Bureau for Sports and Hunting Guns, Alexei Sorokin.

“The Defense Ministry, the Federal Security Service, the National Guard and the Interior Ministry have already placed orders for the new ADS amphibious assault rifles and they will be in mass production next year,” Sorokin said, adding that switching modes was now fast and easy.

He added that the ADS is not a totally new one, but a modification of the already existing ASM-DT amphibious assault rifle.

The new design is more ergonomic and all the user needs to do to fire it underwater is just change the clip.

The ADS, designed and built by the Instrument Design Bureau in Tula, is equally effective against underwater and land targets.

© Sputnik / Grigoriy Sisoev
Sniper Machinegun: Kalashnikov Unveils Universal Weapon for Special Forces (VIDEO)
Unlike its Russian and foreign counterparts that fire needle-like projectiles, which are stable underwater but tend to sway off course when used on the surface, the ADS uses state-of-the-art ammunition that ensures equally accurate fire in both mediums.

The ADS is a bullpup rifle with the action located behind the trigger. It is just over 60 centimeters long and weighs a mere 4.5 kilos. It has an effective on-shore range of up to 500 meters.

When fired 5 meters underwater it can hit targets 25 meters away. At 25 meters, its effective range is down to 18 meters.

The ADS is chambered in a unique 5.45х39mm round that weighs 16 grams and boasts an on-shore speed of about 330 meters a second.

The ADS is currently under extensive field trials by Russian Naval Special Forces. It will replace APS underwater weapons and, possibly, some AK-74M general issue assault rifles in service with Russian Navy Special Ops units and other special forces.