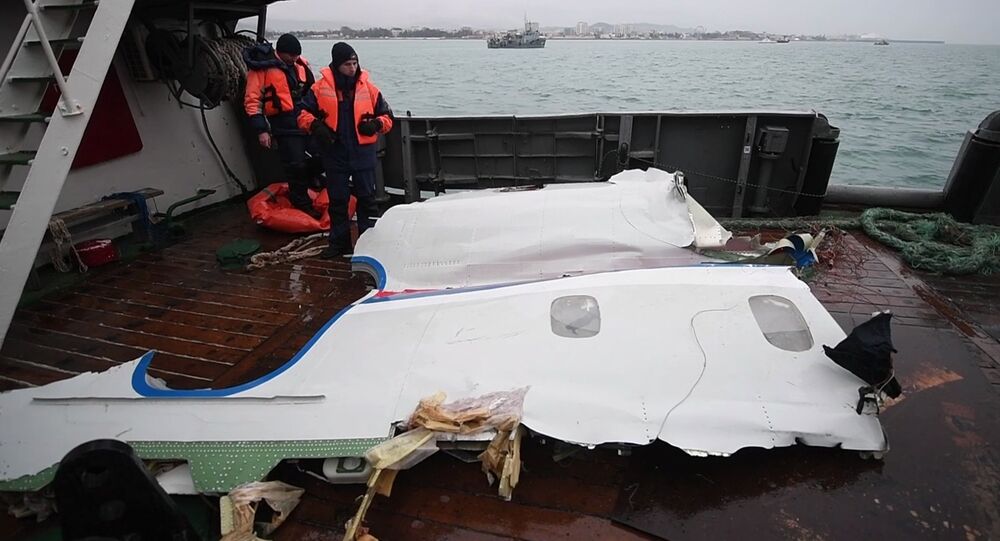 All Tu-154 aircraft in Russia are suspended after the Russian Defense Ministry's Tu-154 plane heading from Moscow to Syria crashed shortly after refueling and take-off from the Russian southern city of Adler, near Sochi.

MOSCOW (Sputnik) — All Tu-154 aircraft in Russia are suspended following the recent crash of one of them into the Black Sea until the investigative commission determines what caused the tragedy, Russian Minister of Transport Maksim Sokolov and Lt. Gen. Sergei Bainetov, the head of the Russian Armed Forces’ Flight Safety Service, said Thursday at a press conference.

On Sunday morning, the Russian Defense Ministry's Tu-154 plane heading from Moscow to Syria crashed shortly after refueling and take-off from the Russian southern city of Adler, near Sochi. The plane was carrying 92 people, including 64 members of the Alexandrov Ensemble, nine reporters, eight crew members, two federal civil servants and a prominent Russian philanthropist, Elizaveta Glinka.

Sokolov said that the main phase of the search operation at the crash site in the Black Sea had been completed but the search would still continue.

"During the rescue operation 19 bodies, more than 230 body fragments of the victims were found and raised to the surface," Sokolov said at the press conference.

Sokolov added that the constructional elements and parts of aircraft, had been collected and were being laid out on the shore.

Sokolov said that final decisions on the causes of the crash would be made only after the data from the plane’s black box, both flight data recorder and cockpit voice recorder, is deciphered.

"Preliminary results of the investigation could be obtained in January 2017," Sokolov told reporters.

© REUTERS / Maxim Shemetov
There Was No Explosion on Board Tu-154, But Terrorism is Not Ruled Out Yet - Russian MoD
The transport minister added that a special commission would look into the circumstances of the crash and asked the media to refrain from speculating on the possible crash causes.

Bainetov said that the commission was initially considering about 15 versions, but later rejected roughly half of them and added that that Russian Defense Ministry was looking into the technical aspects of the crash.

According to Bainetov, the crew of the crashed Tu-154 was skilled and ready for the flight.

"We have assessed that the crew was ready for the flight and had an appropriate skill level to carry out the task. Commander Maj. Roman Volkov had a 4,000-hour flight time, including a 1,500-hour flight time on this type of aircraft," Bainetov said.

Bainetov added that three groups were investigating the crash, one at the airport in Adler, another one at a research institute of the Russian Defense Ministry in Moscow Region, and the third one at Chkalovsky Airport, also not far from Moscow.

Bainetov said that all passengers boarded the plane at Chkalovsky Airport and only border security staff entered the plane when it stopped in Adler for refueling.

© Photo : Russian Emergencies Ministry
Divers Recover Magnetic Tape From Crashed Tu-154's Missing Flight Data Recorder
According to the defense ministry representative, stops to refuel are customary on flights to Syria and the airport in Sochi is one of a few designated locations.

Bainetov also said that the "special situation" onboard the plane only lasted 10 seconds.

"I can tell you that the conversation [with air controllers] was extremely short. Imagine, the situation lasted for 10 seconds. What can you say in 10 seconds? … That’s why the analysis of the commander’s comment only indicates when the special situation started, nothing else," Bainetov told reporters.

Bainetov said that all Tu-154 aircraft were grounded until the cause of the Sunday crash is determined.

According to the Flight Safety Service head, Tu-154 would eventually return to service.

Sokolov said that forensic scientists would mostly rely on DNA tests when identifying the victims of the crash and that the identification would take up to four weeks.

© REUTERS / Stringer/File
China Grieves Over Tragic Death of ‘Russian Pride’ Choir Members in Tu-154 Crash
The process is already underway, according to the transport minister.

Bainetov said that only one victim had been identified and buried so far.

Russian Deputy Defense Minister Nikolay Pankov, who also took part in the press conference, said that the funeral of the first identified victim of the crash, the assistant chief of the Defense Ministry's department of culture Oksana Badrutdinova, took place at a cemetery near Sochi.

© AP Photo / Viktor Klyushin
'Commander, We're Going Down': Clues About What Made the Russian Tu-154 Crash
The transport minister also said that Russia’s largest retail bank Sberbank would write off the loans and debts of victims of the crash. Sokolov added that he would speak to the representatives of other banks after the press conference.

The head of Russia’s labor authority Vsevolod Vukolov pledged to provide all necessary help to the families of the victims.