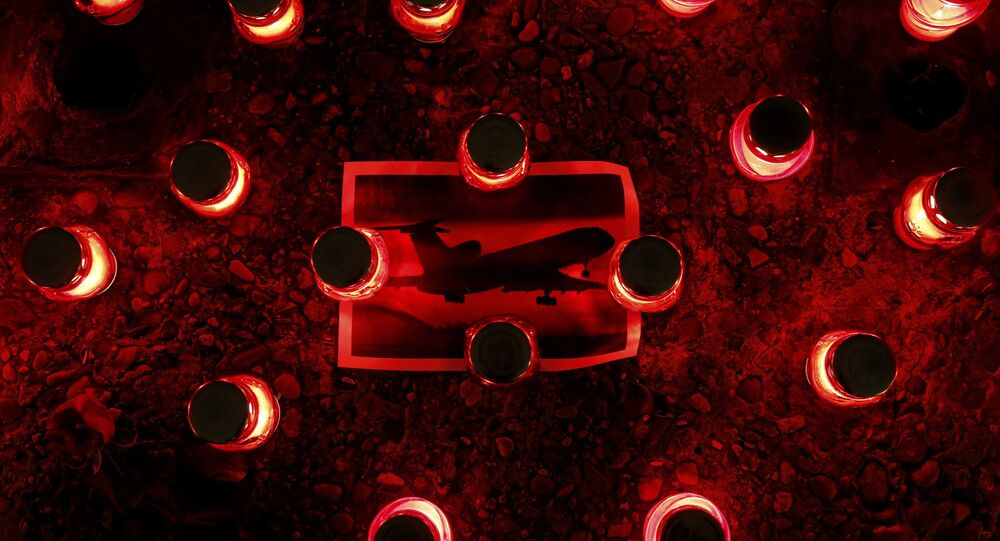 Politicians, officials and ordinary people all over the world have expressed condolences following the crash of the Russian Defense Ministry's Tu-154 plane heading from Moscow to Syria with 92 people on board, including the famous Alexandrov Ensemble members, a prominent humanitarian activist and nine journalists, near resort city of Sochi.

MOSCOW (Sputnik) — People are bringing flowers to commemorate the victims to the port in Sochi, to the Ostankino television and radio Tower and to the building of the Alexandrov Ensemble in Moscow.

© Sputnik / Nina Zotina
People place candles to honour passengers and crew members of Russian military Tu-154 plane crashed into the Black Sea on its way to Syria on Sunday, in the resort city of Sochi, Russia

President Putin expressed his deepest condolences to the families of the plane crash victims and said that a nationwide day of mourning would begin in Russia on Monday, December 26, to honor the memory of those perished in the Tu-154 aircraft crash over the Black Sea earlier on Sunday.

"Tomorrow, a national day of mourning will be announced in Russia," the president told reporters.

"All circumstances of the incident will be thoroughly investigated. The necessary assistance will be provided to everyone affected by this tragedy," Medvedev said in a statement issued on the government’s website.

"With a great sadness, we received the news of the crash of the Russian Tu-154 plane, which was carrying our dear friends, who would like to share with us and the people of Aleppo, the joy of victory and holidays," Assad was quoted as saying by the SANA news agency.

Russia remains Syrian ally in the fight against terrorism, he added.

The German foreign minister extended condolences as well, saying he hoped that some survivors could be found.

"I express the sorrow of our country to Russia, an important partner of Italy," Alfano said.

The Spanish Foreign Ministry expressed condolences of Madrid to the families and colleagues of the victims.

"Spain met with deep sorrow the news that a plane of the Russian Ministry of Defense crashed today in the Black Sea, which led to the deaths of 92 people on board. The Spanish government sends its condolences to the families and colleagues of the victims and all the people and the authorities of Russia," the ministry stressed.

Press secretary of the Czech president Jiri Ovcacek said that the tragedy was taken by the president with a heavy heart adding that "this tragedy is even more regrettable because it affected one of the most important Russian artistic groups, of which Mr. President is also a fan."

"India joins Russia in mourning the tragic loss of lives of Russian servicemen in the air crash today," Modi wrote on his official Twitter account.

India joins Russia in mourning the tragic loss of lives of Russian servicemen in the air crash today.

Pakistani government expressed their condolences through spokesperson of the Ministry of Foreign Affairs Nafees Zakaria.

"The leadership & ppl of Pakistan extend heartfelt condolences 2 Govt & ppl of Russia for tragic plane crash today that killed all onboard. Our special prayers for the bereaved families. We stand by the ppl of Russia as they mourn this irreparable loss," Zakaria tweeted.

Turkish President Recep Tayyip Erdogan has also extended his heartfelt condolences to Putin over the crash.

© Sputnik / Vladimir Vyatkin
'Our Pride and Glory:' Members of Russian Army’s Famed Alexandrov Ensemble Feared Dead in Tu-154 Crash (PHOTOS, VIDEOS)
The presidents of Azerbaijan, Moldova, Belarus, Kazakhstan and Uzbekistan among other leaders also expressed their condolences over the crash.

Secretary General of the Council of Europe Thorbjorn Jagland expressed condolences over the crash of Russian military Tu-154 aircraft crash into Black Sea earlier on Sunday.

"Our thoughts are with the families and loved ones of the victims … and we are thinking of them on this sad day for Russia," Jagland was quoted as saying in a statement.

Leaders of Iran, Serbia, Greece and Israel, ambassadors of China and the United States were among those who conveyed their condolences with respect to the crash as well.