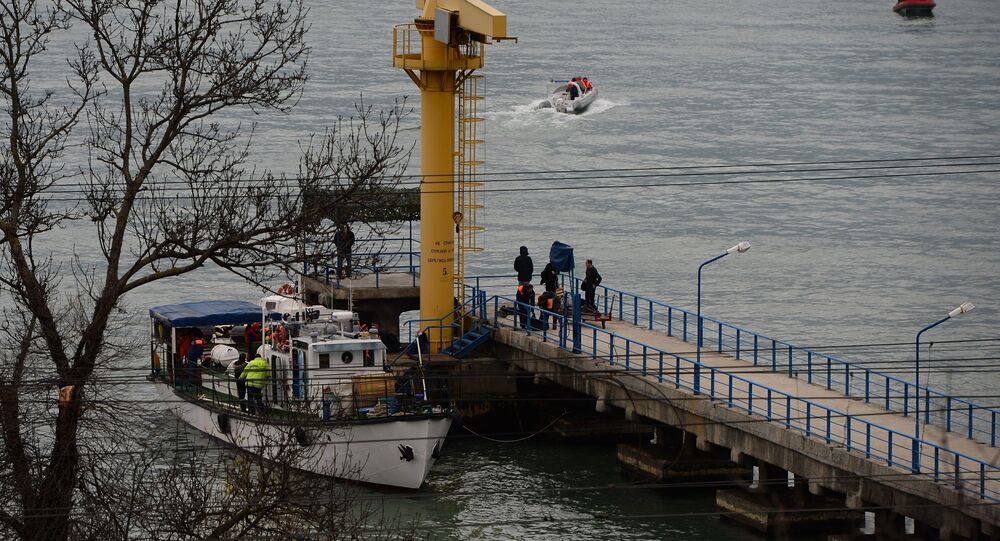 A Russian military plane with 92 passengers and crew on board crashed into the Black Sea on its way to Syria shortly after taking off from the southern resort of Sochi on Sunday morning.

© Sputnik / Nina Zotina
Russian Defense Ministry Confirms 10 Bodies Recovered at Tu-154 Plane Crash Site
The cause of the crash hasn’t been determined yet, but technical malfunction or pilot error are considered the most likely causes of the tragedy.

In an interview with Sputnik, General Director of Aviation Technologies Alliance Viktor Pryadka pointed to a serious flaw in the design of the Tu-154.

“When flying at an angle of 15 or 16 degrees the aircraft gets ‘stuck’ and there is no way you can possibly make it level again. As a result, in starts going down until it hits the ground. After takeoff the pilot needs to spend some time flying the plane in a horizontal mode before it can start climbing again. If he doesn’t, or makes a turn, the plane goes into a nosedive,” he said, adding that this is exactly what could have happed to the ill-fated Tu-154.

Pryadka also ruled out the possibility of a bird getting sucked inside one of the engines and shutting it up.

“Unlike modern planes, the Tu-154 has three engines and it is highly unlikely that all the three of them could fail.”

Yuri Sytnik, a Merited Pilot of Russia and a member of the presidential commission on civil aviation, said that everything was possible, including a mid-air collision with a “foreign object,” but added that even then the pilots would have enough time to inform the airport tower about the mishap.

“The Tu-154 is a highly reliable plane, even though it is not the easiest one to fly. In this case the pilot was a real ace and if even he failed to prevent the disaster, then something extraordinary must have happened,” Sytnik said.

He added that even though the Tu-154 was 33 years old, it had been used very sparingly and was very well maintained too. He didn’t think that there could have been an explosion on board because it would have been noticed from the shore.

Meanwhile, officials ruleed out a possible terrorist attack. Viktor Ozerov, head of the Federation Council’s Defense Committee said the crash could have been caused by a technical malfunction or pilot error, but excluded a terrorist act, arguing that the plane was operated by the military.

"I totally exclude the idea of an attack bringing down the plane,” Ozerov told RIA Novosti.

His opinion was echoed by first deputy head of the State Duma’s Defense Committee Andrei Krasov, who likewise ruled out terrorism as the possible cause of the crash.

© Sputnik / Nina Zotina
Russian Transport Minister to Hold Plane Crash Investigation Commission Meeting - Ministry
“I think that something extraordinary must have happened. I just can’t figure out how anything like this could happen to a plane operated by the Defense Ministry. No, this is impossible,” Krasov told RIA.

Veteran test pilot Yuri Vashchuk downplayed the possibility of a technical mishap on board the crashed airliner.

“It must take some really extraordinary situation to cause the simultaneous shutdown of all the three engines. The failure of even one engine is already critical, but I still don’t think that it could lead to a catastrophe,” he said.

“I believe something happened on board so fast that the pilots simply had no time to respond. Something like what happened to our plane in Egypt – momentary depressurization of the cabin resulting in a complete loss of control,” Yuri Vashchuk added.

He also ruled out an onboard explosion arguing that the plane had departed the airport just minutes earlier and someone would have certainly heard the sound of a blast.

According to the Defense Ministry, the crashed Tu-154 was flown by Roman Volkov, a seasoned First Class pilot with an impressive track record of over 3,000 hours spent in the air.

The Tu-154 disappeared from radar screens two minutes after taking off the Sochi International Airport on Sunday morning.

The plane, which belonged to the Defense Ministry, was taking the renowned Alexandrov Ensemble, the army’s official choir, to a concert at a Russian air base in Syria.

The list also includes prominent Russian humanitarian and charity activist Yelizaveta Glinka, who was travelling to Latakia to deliver medical supplies to a hospital, eight military troops, nine journalists, two civilian officials, and an employee from an international humanitarian organization.