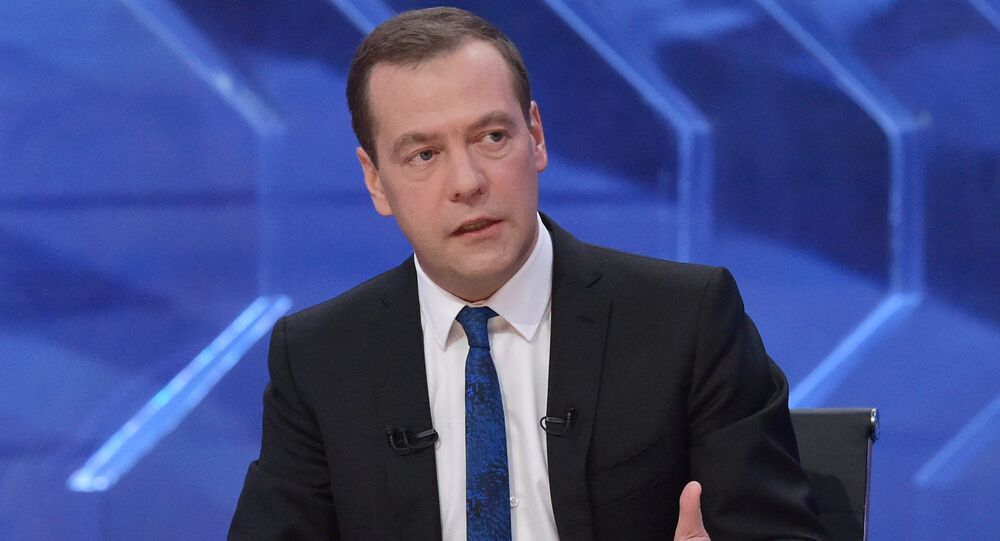 Russian Prime Minister Dmitry Medvedev on Thursday gave an interview to five of the country's major television channels on Thursday.

MOSCOW (Sputnik) — Medvedev spoke about his vision on a number of issues, including the country's economy and privatization processes, on security and arms trade, on the recent doping scandal, as well as on the future of Moscow's ties with the US.

© Sputnik / Alexander Astafiev
Inflation in Russia in 2016 to Stand at Historically Record Low Level of 5.5%
Speaking about the current situation in Russia's economy, the head of the government said that the authorities were meeting all of their social obligations before the country’s people and had retained economic stability, but at the same time noted that the economic indicators could be better.

"As far as the social-economic issue is concerned, I think that the important thing is that we continue to develop despite external restrictions, internal issues, we retained macroeconomic stability, we are fulfilling social obligations which we took upon ourselves," Medvedev said.

He added that despite a decrease in the country's GDP in 2016, the national economy would start to grow in 2017.

"This year we are likely to have a slight decrease in the gross domestic product, slightly less than 1 percent, may be 0.5 percent, we still need to do the final assessments. Next year, our economy… will start growing."

According to the prime minister, the government is not satisfied with potential economy growth rates of 0,5 or even 1,5 percent, as Russia's growth rates could become higher than the ones around the world if Moscow continues structural changes of its economy.

Medvedev added that the country's authorities had succeeded to achieve a historically record low level of inflation for the country.

"This year, the planned inflation is 5.8 percent. But actually I think — I spoke to the economics minister on the issue yesterday — it will be around 5.5 percent. This is the lowest result in the entire history of our country," the head of the Russian government said.

Speaking about the country's economy, the prime minister also covered issues related to the privatization of Russia's state property, with a focus on a recent deal on the sale of a 19.5-percent stake in country's energy company Rosneft to an international consortium of the Swiss-based mining company Glencore and the Qatar Investment Authority (QIA) for 10.5 billion euros (some $11.3 billion).

The official added that Moscow had had to make efforts to sell Rosneft's shares as soon as possible taking into account the instability of the global oil markets and the fact that the consortium was able to pay quickly.

"The force of the proposal made by Glencore and the Qatar fund was that they were ready to implement the deal quickly," Medvedev said.

He added that the sides had also discussed the issue of possible sale of stake to Japanese investors.

The Russian prime minister said that the country would continue selling large stakes, and would do it in accordance with the law.

He added that Russia would increase the volume of arms exports in order to reach the $20-billion annual target.

Medvedev said that the situation in Russia's security was stable, mostly because of the state's defense spending.

"When we speak about the growth of government spending on defense, we realize that it is not only for the Defense Ministry and servicemen, but also for the development of the entire country, ensuring its security and defense capability," the prime minister said.

The prime minister said that there should be a taboo on doping use in sports, but it should be clearly defined to avoid manipulations.

"We treat the doping issue the same way as other countries do. We think doping is unacceptable in sports. There should be a taboo on doping use … However, as I have always said and my colleagues have said, it is necessary to work out what doping is," Medvedev told Russian television channels, denouncing "manipulations."

According to Medvedev, there is no evidence that Mutko has been involved in the doping schemes.

"We do not have proof that minister Mutko was responsible for the doping scandal, if we had such evidence, he would not be working for the government," the head of the Russian government.

During the interview, the reporters had also asked Medvedev about the relations between Russia and the United States against the backdrop of deterioration of bilateral ties between the two counties, as well as in the context of the recent victory of US President-elect Donald Trump and the nominations made by the US politician, while forming his administration.

According to Medvedev, the United States was responsible for the degradation of relations between Moscow and Washington.

"The fact that our relationships have degraded, it is clear that the new [US] government will proceed from the national interests, but we still believe that this degradation is unfortunately to be blamed on our US partners. We did not seek this," Medvedev told reporters.

At the same time, he said that Russia-US security partnership was inevitable as two countries were responsible for maintaining peace in the world.

"The first sector, where we depend on each other… is a matter of the international security. Two countries, the major nuclear powers and permanent members of the [UN] Security Council, we have a fundamental responsibility for the maintenance of the world peace," the prime minister said.

Speaking about Trump, as well as about Rex Tillerson, who is the president-elect's nominee for the role of US secretary of state, the Russian head of government said that a number of issues voiced by Trump during the presidential campaign had rational nature, while Tillerson was a person with a "pragmatic thinking" and without "anti-Russian stereotypes."