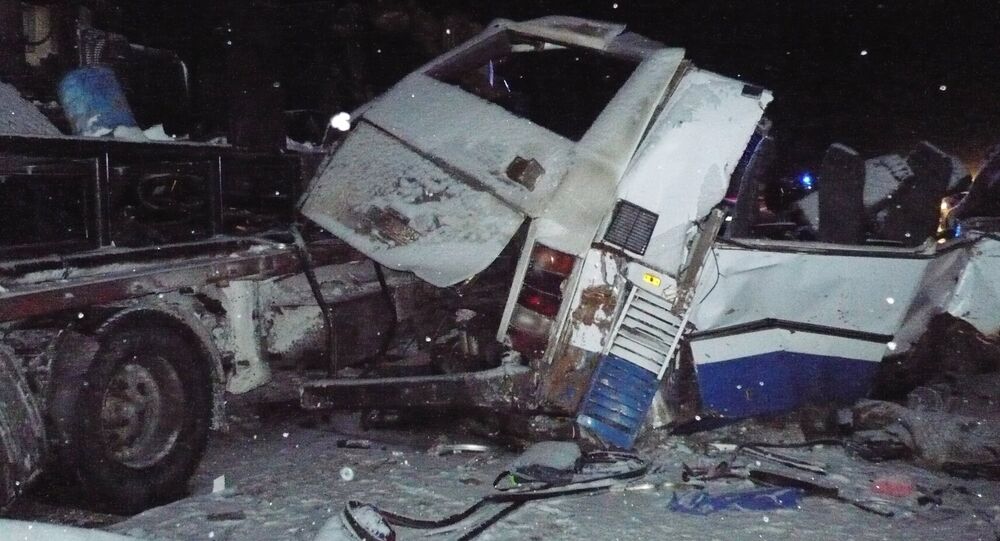 Twelve people, including 10 children, died as a result of a large-scale car accident on a road between the cities of Tyumen and Khanty-Mansiysk in Russia’s central Khanty-Mansi autonomous region, a source in emergency services told RIA Novosti.

MOSCOW (Sputnik) — According to earlier reports, seven people were killed and 20 injured as a bus collided with a truck and two passenger cars on the 926th kilometer of the highway.

"Victims of the road accident are 12 people, including 10 children and two adults," the source said.

The region's Prosecutor's Office confirmed that the death toll reached 12.

"All those injured in the accident have been delivered to the district clinical hospital of Khanty-Mansiysk," the Emergencies Ministry said in a statement.

A criminal investigation into the accident has been launched, the Russian Investigative Committee’s spokeswoman Svetlana Petrenko said.

According to the region’s authorities, the bus that became part of the accident had been carrying a children’s sports team of 29 people, on their way from an acrobatics contest.

© AP Photo / Saeed Esmaeilpour, Fars News Agency
Putin Offers Condolences to Rouhani on Deadly Iran Train Crash – Kremlin
The drivers of the vehicles that collided were sober at the time of the accident, the press service of the Interior Ministry said, citing preliminary data, adding that the bus driver’s actions had caused the accident.

Interior Ministry spokeswoman Irina Volk has said that the head of the Russian Interior Ministry’s traffic police Lt.-Gen. Viktor Nilov has left for the Khanty-Mansi region to assist in the investigation of the accident’s circumstances. According to Volk, representatives of the traffic police and emergency services have already arrived at the scene to cope with the consequences of the accident. Altogether, 36 people and 13 units of equipment are on the site to tackle the situation, she said.

At Least 7 Killed, 18 Injured in Car Accident in Nepal